This year is the first year that a day dedicated to asteroid awareness will be observed.

...June 30 is the anniversary of the 1908 impact of an asteroid in Siberia that wiped out some 800 square miles of forest. The surprise impact of the 2013 Chelyabinsk meteor, which caused a 500-kiloton airburst over Russia, shows potentially threatening space rocks are still out there.

...In 2013, researchers at the Asteroid Deflection Research Center at Iowa State University came up with a plan to use a two-section spacecraft to first smash a hole in the asteroid, then dump a nuclear weapon into the crater to blow it up.

(Source : NASA Working With National Nuclear Security Administration On Plan To Use Nukes On Doomsday Asteroid )

Some people are wondering why now, all of a sudden?

...NASA and the National Nuclear Security Administration are teaming up to try to figure out a way to use nuclear weapons to either destroy threatening asteroids or to at least nudge them off course. This seems very odd considering the fact that just a couple of weeks ago NASA publicly announced that it knew of “no asteroid or comet currently on a collision course with Earth” and that “no large object is likely to strike the Earth any time in the next several hundred years“. If what NASA told us previously is true, than it would seem that it would be a tremendous waste of time, money and resources to work on a way to destroy asteroids using nuclear weapons. Why is NASA suddenly so interested in the threat of large asteroids if one is not likely to hit us “any time in the next several hundred years”? Could it be possible that they know something that they are not telling us?

...Earlier this year, they conducted a “hypothetical asteroid impact scenario”.

...Most people assume that a major asteroid strike is not a threat because one has not happened during any of our lifetimes. But NASA would not be going to all of this trouble if this was something that they were not concerned about.

In the end, what they are not telling us could turn out to be far more of a problem than most of us ever imagined.

(Source : Why Is NASA Working On A Way To Destroy Asteroids Using Nuclear Weapons?)

WHAT IF I TOLD YOU THERE IS A TORAH CODE THAT SAYS - "ASTEROID, TISHREI, 5776, WARNING FROM GOD"?  WE'RE TALKING THREE MONTHS FROM NOW! 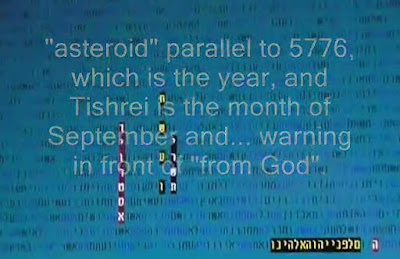 I'm not saying it's going to happen, but I'll leave you to re-watch Sa'ada's vision of the future that she saw. (The gentiles are taking it seriously - Asteroid danger: Giant space rock to be on collision course with Earth)

ERETZ YISRAEL IS THE SAFEST PLACE FOR JEWS TO BE!
Posted by Devorah Chayah at 10:11 PM