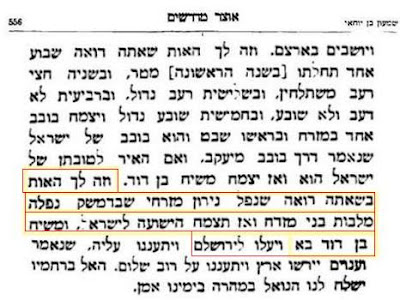 Rashbi in an Ancient Prophecy: When Damascus Falls - Salvation Will Sprout to Israel
While news arrives from Syria about the waning of Assad's regime, Rabbi Shimon Bar Yochai was expecting it a long time ago - accompanied by a surprising promise


Will the fall of Assad's regime be significant in some way or another for the State of Israel? Commentators differ in their opinions, but it seems that everything is dwarfed by a surprising description of Rabbi Shimon Bar Yochai, written thousands of years ago.

The book "Otzar Midrashim" is a description of the redemption, as Rabbi Shimon bar Yochai heard from an angel while hiding in a cave. In the Midrash, it shows a section that appears to refer to our days: "And it's a sign for you, when you see that an Eastern Nero has fallen, that in Damascus has fallen the Bnei Mizrach kingdom, then will sprout the salvation of Israel, and Mashiach ben David comes and will ascend to Jerusalem."

There was someone who checked and found that "Eastern Nero" in gematria equals "Bashar Assad". The actual timing is so appropriate, when the news from Syria is reporting on the last death throes of the Assad regime.
Posted by Devorah Chayah at 11:41 AM

Actually, there is a video on youtube somewhere where the Lubavitcher Rebbe is urging the IDF to conquer Damascus (I think perhaps during the second lebanon war?) because (the Rebbe said) Damascus is the "fortitude of the Arab world" and when Damascus falls, Israel will rise. Not sure exactly about the last part - if Israel will rise, or Jerusalem, or Moshiach - but somewhere in that range. Amazing. May it happen NOW!

it regarding damascus as you wrote above.

Thanks, 10rainbow. Here is a clickable link to the story...

The Rebbe and the General

Yes, thank you, 10rainbow. It's a very incisive article.
The Rebbe was always very clear not to give up any part of the Land of Israel, and seeing how a big chunk of Syria is technically Eretz Yisrael, I imagine that this unnecessary surrender against halacha also affects Heavenly judgements and the like.

Didn't Ya'ak do a post about Neron Mizrahi two years ago? Here we are two years later. Perhaps 5772- 5773 were a bit Achishena, but now that we have reached the end of this Shmittah cycle, it has to happen now.

Ok, I found two of his posts dealing with Niron Mizrahi:
http://yeranenyaakov.blogspot.co.il/2012/12/nero-of-east-in-cartoon.html
I commented on that one wondering if it would take two more years from when this cartoon appeared. And lo and behold, we are about 2 1/2 years later!

and also a few months later Here in a discourse from Rav Fish:
http://yeranenyaakov.blogspot.co.il/2013/08/is-damascus-destined-to-be-destroyed.html

Thanks for the reminder, Dov.

The anagram of Damascus, in Hebrew, is MIKDASH! What a coincidence, it seems that we have to capture Damascus to collect the materials needed to build the Third Temple!