There is a dangerous heresy gaining traction among our nation.  It is being promulgated both by enemies who know what they are doing and by those who don't know any better, but who find the ideas attractive.  Much can be said on this matter, but all anyone really has to know to avoid falling into error is to avoid anyone or anything that claims Judaism or the Torah is "universal."

This is a Christian concept masquerading as Jewish, i.e. "Judeo-Christian".

According to the Maharal...

...the fourth empire [Rome] was a universal synthesis, alone equivalent to the others. ...Because of its universality, this empire is motivated to be everything, not allowing anyone else to co-exist."  (The Mitzvah Candle)

[Jee-Zeus] ... has made the two groups [Jews and Gentiles] one and has destroyed the barrier, the dividing wall of hostility, by setting aside... the law with its commands and regulations. His purpose was to create in himself one new humanity out of the two, thus making peace....  (Letter to the Ephesians, New Testament)

Because some of our ancestors who were not so gullible resisted, Jews still survive as a distinct group today, but there is no doubt that a new wave of pressure is being brought to bear to convince a new generation to give in and become one.

Here are some examples...

Call for Establishing A Universal New Israel
We call upon all people, of all religions, cultures and nations worldwide who would love to be counted as “Israelites” (“The Righteous People of God”) to come forth to re-establish the Universal, Holistic Israel, with its full constituency of 12 Nations (or "Tribes").
To form a global unified (12-fold) Messianic Body that aims to fulfill the Biblical Plan for Global Redemption. This was the plan of the Biblical patriarchs and prophets – including the “genuine Jesus”....
The need to create a novel Universal Zionism that is not exclusively Jewish.
Goals:
To heal the roots of the Jewish-Christian Schism, as well as the Muslim-Christian and Muslim-Jewish schisms.
To develop the universal 12-Tribe structure of Knesset Yisrael - the Holystic Israel. Untie the exclusiveness of Judaism and Zionism to make Judah a blessing for his brothers (Gen. 49:8).
To establish at the center of the Earth's continents, in Jerusalem, a House of Prayer and moral-spiritual Ascent for all Nations and for disseminating the Universal teachings.

...Maybe our mission on earth is not to embrace nationalism and the fetishizing of ethnicity – but to bring the values of cosmopolitanism, humanism, rule of law, and embracing diversity, that we lived for in exile around the world — that protected us in Russia, France, Italy, Spain — and did not protect us when they were weakened — into the universe?  Maybe our gift is supposed to be knowing what being an exile, stateless, homeless, feels like — so bringing universal values of justice, liberal humanism, democracy, the search for truth in a context of free speech, and civil society — into every society.  (Naomi Wolfe)

The primary purposes of UIWU are to represent a universal version of the Hebraic faith to the non-Jewish world, based primarily on the Hebrew Bible, as well as to provide a meeting place for Jews with non-Jews who are accordingly drawn to this message. The hallmark of the organization is Isaiah’s prescription that “My house will become a house of prayer for all peoples.” ...Membership is based on the simple declaration of faith in the One God of Israel and a commitment to live according to the principles of the Hebrew Bible.

[Alice] Bailey taught a form of universal spirituality that transcended denominational identification, believing that, "Every class of human beings is a group of brothers. Catholics, Jews, Gentiles, occidentals and orientals are all the sons of God." She stated that all religions originate from the same spiritual source, and that humanity will eventually come to realize this, and as they do so, the result will be the emergence of a universal world religion and a "new world order".

[A] central tenet of Reform Judaism is the belief that it is the universal mission of Jews to spread God's message, to be a light unto the nations. 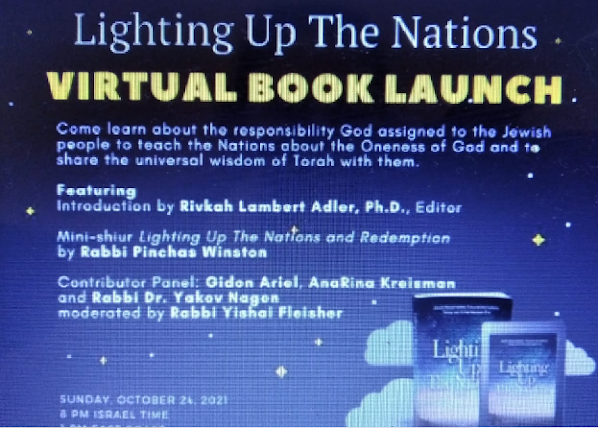