Warning To Beware - Events to Avoid


"Religious humanism is an integration of non-theistic humanist ethical philosophy with religious rituals and beliefs that center on human needs, interests, and abilities." (Wiki)

The Emerging Religious Humanism - Reason and Reverence
A new religious humanism is emerging that offers depth, meaning, and purpose without sacrificing intellectual honesty or the spiritual dimension. ...a religion for the twenty-first century.

Apparently, this is what "Zionism" has morphed into - on both ends of the spectrum. It's much less ethnocentric and much more universal.

As an example, I'll cite two references I saw just today. In one it was reported that US Congressman Eliot Engel praised Israel on the occasion of Jerusalem's 50th year of reunification by calling it "a model of religious pluralism". The Torah actually calls us to be the opposite, but there's nothing of the Torah in this. Unless you want to count the second reference from today, in which Shmuely Boteach was reported to be leading a group to dedicate a Torah scroll to the People of Rwanda saying: “I believe that the Jewish people and the Rwandan people are brothers and share not just a tragic history of mass slaughter, but more importantly a common history of renewed promise,” he said.

This New Universal Religion for Modern Humankind will encompass the Eisav-Ya'aqov hybrid aka Judeo-Christianity (a Jewish/Messianic/Ephraimite alliance) and the "peace-loving moderate" Muslims. Those joining themselves body and soul to this unholy amalgam are using this special and unprecedented occasion of the week-long 50th "Jubilee" celebration of Jerusalem's reunification to launch a spiritual war against us.

The following events are being held as joint celebrations between Jews and Christians and are being used to encourage more Jews to jump on board. Be aware - beware - and warn others what is really at stake here. 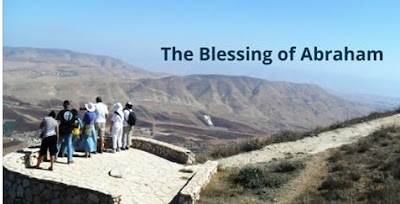 ‘THE BLESSING OF AVRAHAM’ – THIS is what it is all about – the entire Bible Message – HaShem’s Purpose for Life on earth. This is what is behind the current Phenomena which is engulfing the earth like a fast building Tsunami.

...This Promise, a Divine Blessing, was to Abraham and his descendants – and THIS is where the staggering revealing Truths for our Time come in: a Promise of “Meloh HaGoyim” (Gen. 48:19) – a multitude of nations … countless numbers of descendents, from HIS bloodline, uncountable as the sand of the sea, the dust of the earth (Gen. 13:16). They would be – now hold on firmly – GOYIM = non-Jews by today’s standards of reasoning!!

The Commonwealth of Israel (Ephraimite) Conference starts Sunday, 21 May 2017 and runs through Tuesday, 23 May 2017. It is being held in Jerusalem and several rabbis will be participating on the same program with Ephraimite speakers such as Stephen Spykerman. 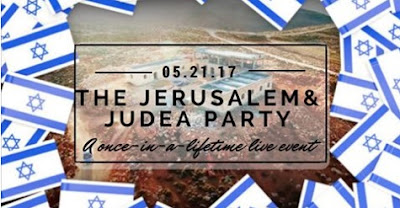 This is another joint celebration with Jews, Ephraimites (HaYovel) and Christians all welcome to intermingle and party together in celebration of not only Jerusalem's 50th year of liberation, but the inauguration of Jeremy Gimpel's and Ari Abramowitz's interfaith center in Gush Etzion. Listed sponsors are Jewish Press, Arutz Sheva, United With Israel, BIN, and Israel Video Network. By the time I finish putting all this together, it probably will already have started, but I advise staying away.

HaYovel is bringing Christians, many, if not all, identifying as Ephraim, to join with Jews in celebration and to generally mix and relate and renew the "family" ties as well as getting "reacquainted" with the homeland. It runs for two weeks beginning Tuesday 23 May 2017.

This 2 week experience will include a special celebration of Jerusalem’s liberation, the celebration of Shavuot, (also in Jerusalem), an in-depth tour of Judea and Samaria with local, 5–star tour guides, 1-2 days of volunteering in Israel’s agriculture, a tour of 1-2 wineries in Samaria, and a trip to the Knesset in Jerusalem.

...HaYovel is excited to partner with Israel365 and Rabbi Tuly Weisz for the Recognize Jerusalem Trip! You will notice an updated itinerary below, with some incredible items added to the tour.

We are also excited to be working with Bridges for Peace and Israel365 for the Rejoice with Jerusalem event to be held overlooking the Old City of Jerusalem on May 25th!


The itinerary includes "teaching and study" with Jeremy Gimpel and Avraham Hermon (Assistant to Har Brachah's Rabbi Eliezer Melamed) as well as "volunteering" at Ari and Jeremy's "Farm" (see above); tours of various wineries, more teaching with Missionary Lars Enarson and a meeting with a Holocaust survivor and possibly Members of Knesset. It's my understanding that they will also be attending Tuly Weisz's Prophecy In The News Conference, which is next on our list of things to avoid, but it's not for another couple of weeks.

We brought together a group of diverse Jewish and Christian voices who are at the forefront of creating and reporting on what God is doing in Israel.
l
Please note that among the listed speakers for their program is well-known and well-respected Rabbi Pinchas Winston. THIS IS IN ERROR. Rabbi Pinchas Winston will NOT be a participant at this conference!

Among the supporters listed for the event are Israel365, The Israel Bible, and The Yeshiva For The Nations (all three of which are Tuly Weisz's personal projects), as well as Israel Media Network, The Center for Jewish-Christian Understanding in Efrat and get ready for it... HAYOVEL!!

Put all this together with what President Trump is bringing to town and you could call it an onslaught.
Posted by Devorah Chayah at 5:42 PM