The Waller-War and Why It Matters - Part 2

Today, if someone seeks to connect to their Hebrew roots, they mean to acknowledge that they are Ephraimites, Joseph ("Joes" rather than Jews). Other names are 2-House Israel, 10-Israel or 10-Tribers. They have decided, based on their own "ruach hakodesh", that they (Christians/Messianics) are actual descendants of the Ten Lost Tribes of Israel. 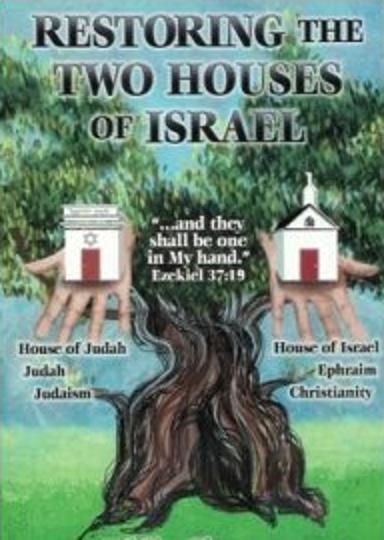 It has taken the traditional New Testament idea of being "grafted in" to a whole new level. Instead of viewing themselves strictly in terms of the "spiritual seed of Avraham Avinu" expecting spiritual rewards, now they imagine themselves to be actual physical "seed" entitled to their own share of their inheritance in the Land of Israel.

And I say "imagine" because there is no way whatsoever to prove any of this. We see from the example given to us in Tanakh (Ezra 2.62) that when the Jews returned from Bavel, those Kohanim who could not prove their lineage were disqualified from service.

"These who traced their genealogy sought their records, but they were not found, and they were disqualified from the priesthood."

Just like the anusim, there is a path of "return" open to the House of Israel. It's called conversion - the price one pays for the sins of his ancestors.

But, this won't work for these Ephraimites. Why? Because they remain Christians for all intents and purposes and won't give that up. Even though many people, some very well-meaning, have come to sincerely believe, at the urging of their leadership, that they really are descendants of the Lost Tribes of Israel, a billion more believe Islam is correct and another billion believe Hinduism is correct. Belief does not determine Truth.

However, if it remained only a matter of belief, I would not be wasting my time writing about it. It has gone way beyond that. I have been following the development of this movement since 1999. Its proponents and adherents have been working steadfastly - under the radar - laying the groundwork to promote their "Right of Return" to Eretz Yisrael. And, of course, they have help from the Jews.

The following is a clip taken from an interview done three weeks ago. You can hear it in its entirety here.

Here are a few of the Jewish organizations helping and encouraging this "phenomenon":

Although to be fair, Ephraim Frank is not a Jew, although his wife Rimona is. I guess you could say this is the ultimate merging of Judah and Ephraim. More about "merging" later.

So, what does any of this have to do with Tommy Waller and HaYovel, you must be asking.

Well, I'm getting to that.