Sinning For the Sake of Redemption

Considering that Tuly Weisz and other gullible Jews, like Michael Oren and Yehuda Glick will be participating together tonight with Donna Jollay, HaYovel and Bridges for Peace...


"Hundreds of Jewish and Christian Zionists will be rejoicing together this week in a special gala dinner to honor Jerusalem’s Jubilee year in the presence of Knesset members Michael Oren and Yehuda Glick. Bridges for Peace, Hayovel – another Christian organization dedicated to serving the people of Israel – and Israel365 will all be celebrating together." (JPost: 50 YEARS OF CHRISTIAN SUPPORT FOR JEWISH JERUSALEM by Tuly Weisz)

"This Thursday, May 25th, HaYovel is partnering with Bridges for Peace and Israel365 to host the Rejoice with Jerusalem event, right from the heart of the Jerusalem....The evening will include speeches by former Ambassador to the US and current Member of Knesset Michael Oren and Rabbi and Knesset Member Yehuda Glick." (HaYovel Facebook page)

...it may be worth republishing the following blog post which came out a couple of months ago.

It establishes the missionary connection to Tuly Weisz and the Israel365 initiatives through Donna Jollay. HaYovel, you should be fully cognizant of at this point, and then Bridges for Peace, which may not be something you've heard much about. The video clip below will tell you all you need to know about them.

Sinning For the Sake of Redemption

On the face of it, it's a very shocking idea - sinning in order to bring the redemption. But, it is an idea which underlies the most destructive false messanic movements in Jewish history and which is re-emerging in our own time.

"...a sin for the sake of heaven is greater than a mitzvah done with bad intent."

Now compare it to this principle which is at the heart of all false messianic movements:

Antinomianism - 1) In Christianity it is the doctrine or belief that the Gospel frees Christians from required obedience to any law...and that salvation is attained solely through faith and the gift of divine grace. 2) The belief that moral laws are relative in meaning and application as opposed to fixed or universal.

With regard to Sabbateanism and Frankism, too...


...Unlike traditional Judaism, which provides a set of detailed guidelines called halakha that are scrupulously followed by observant Jews and regulate many aspects of life, Frank claimed that "all laws and teachings will fall" and following antinomianism asserted that one's most important personal obligation of every person was the transgression of every boundary.

Frankism is commonly associated with Sabbateanism, a religious movement that formed around the identification of the 17th-century Jewish rabbi Sabbatai Tzvi as the Jewish messiah. Like Frankism, the earlier forms of Sabbateanism believed that at least in some circumstances, antinomianism was the correct path. Tzvi himself would perform actions that violated traditional Jewish taboos, such as eating fats that were forbidden by Jewish dietary laws and celebrating former fast days as feast days.

...Frank claimed that the mixing between holy and unholy was virtuous.

It sounds just like those among us today who have gone way beyond simply accepting donations from idolaters which itself was wrong, because it was the first misstep which lead to all the rest. It has lead to providing idolaters access to Jewish children, to lone soldiers, to Holocaust survivors and other vulnerable populations in the Land of Israel. It has lead to moving Jews out in order to give the idolaters a permanent home inside the yishuv where they worship their false god in our holy land. It has lead to bringing them into Jewish homes and hosting them at meals and attending their weddings. It has even lead to "partnering" with them in spreading a distorted Torah to the world - a universalist  ["Judeo-Christian" or, God forbid "Zionist"] Torah. And all this sin has been committed in the name of "bringing the redemption". 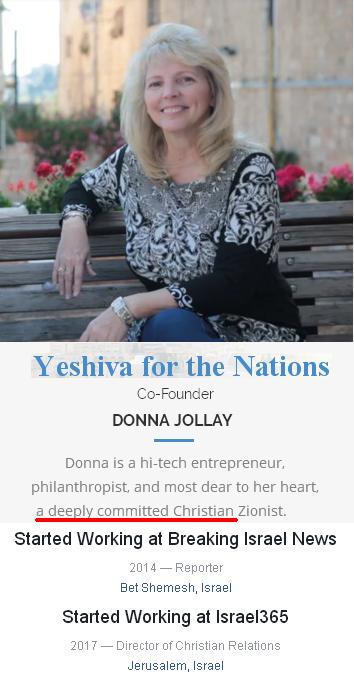 This idolatrous Christian woman is "partnered" with a Jew in three projects which appear to make mixing the holy and the unholy into a virtue. In fact, it was one of their associates who wrote that bolded comment you see above.


[In the JPost article cited at the beginning, Tuly Weisz says, "Jollay decided to fund an online academy, the “Yeshiva for the Nations,” where non-Jews can study the Bible from Jewish scholars in Israel. The first of its kind, YeshivafortheNations.com has the potential of revolutionizing Christian support for Israel for the next 50 years,....]


They want you to believe that these are some kind of "new" Christians - not like the ones of the past who openly persecuted Jews. These are tolerant Christians who simply want us to be the best Jews we can be. They have no designs on our souls any longer.

Well, Ms. Jollay's email presents a different story. It would seem from her presentation of a recent Christian "prophecy" that she still harbors the 2,000-year-old Christian dream of seeing all the Jews come to faith in JC...

Some of the people He tipped his head to I knew had great authority, heads in the Jewish community--rabbis. I could literally see in a glance the Lord opening up their eyes; I could see the Lord appearing. He was appearing to some of the top rabbis in the land, and just with a glance and a nod, a flame of revelation started to burn on the depths of the inside, in a second the eyes of their hearts were opened.

...We followed these Rabbis up to their rooms, as they went up into the upper rooms of their houses. I watched these Rabbis fall on their knees and cry out, "This Changes EVERYTHING. This changes EVERYTHING!" I saw the Lord go over and blow on that tiny ember of revelation on the inside, and little by little, it started to burn like an unquenchable fire.

... I saw that this fire would continue to burn until the appointed day would come when these Rabbi's could hold it in no longer and they would shout it from the top of the mountains, "Yeshua is Messiah...YESHUA IS MESSIAH!" I thought about how we pray for this....

And she closes her email with this...


Jesus, Yeshua, I thank YOU that YOUR Blood has Covered and Redeemed my own sin and I plead your blood for the sins of my family, my nation, the world and as an Israel Commissioned Watchman on the Wall of Jerusalem for Jerusalem and Israel of abortion – and thank YOU Yeshua for Laying Down Your Life to Save and Redeem us all– HALLELU YAH!!!" The Bride and The Spirit cry “COME LORD JESUS, YESHUA!!! and for our Hebrew Brothers we agree “HOSANNA!!!” Baruch HaBa B'Shem Adonai - Blessed IS HE that Comes in the Name of YHWH!!!

God’s ABUNDANT Blessings and FAVOR in JESUS, YHWH Yeshua HaMashiach (LORD Jesus the Messiah in Hebrew) upon you and yours!!!

The French have a saying: plus ca change plus ca meme chose - the more things change, the more they remain the same. King Solomon said it more succinctly: Ayn chadash tachat hashemesh - there's nothing new under the sun.

Don't be fooled. Don't be mislead. If you've already fallen for this error, repent now, before it is too late.
Posted by Devorah Chayah at 5:00 PM