The word is spreading. Eyes and ears are being opened. After years of obfuscation, the truth is coming to light and Jews are beginning to understand this Torjan Horse called HaYovel. 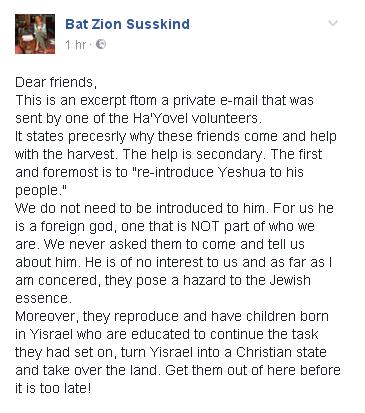 The email sent from a regular HaYovel volunteer that was shared on Facebook:

Shalom to you all!
Once again, it’s a Saturday night. I’ve been wanting to write ever since Wednesday but couldn’t find the time. We’ve had a very full week – full picking days and long good tour days. And today we’ve had a beautiful, uplifting Shabbat.
We had guests! Jeremy Gimpel and his family and Ari Abramowitz join us. They shared some thoughts about Shabbat and the Torah portion. You can hear them regularly on their radio program here I highly recommend listening to it! I always learn so much from them. Avraham Hermon also came after Shabbat and shared about today’s Torah and Haftorah portions. (The weekly sections of Scripture that are read from the first 5 books of the Bible and then from the Prophets and Writings.)
Last Sunday was a record-breaking day! We picked over 40 tons of grapes! It’s a pretty amazing story…
There’s a rabbi in Shiloh who has been very much against HaYovel and what we’re doing here. His animosity is very understandable and we’re not offended by it. The history of what Christianity has done to the Jewish people over the centuries has been horrific. If you’re not familiar with the history, I would highly recommend reading the book “Our Hands are Stained with Blood” by Michael Brown. Being very familiar with our history is extremely important for when we have the opportunity to be with Jewish or Muslim people.
Because he doesn’t trust us and feels like we’re trying to convince Jewish people to convert to Christianity, this rabbi has tried to shut HaYovel down in the past and even though he has vineyards, he doesn’t want us to help harvest them. This year, his son called Nate Waller and asked if HaYovel could help him with a large harvest that was needed on a specific day. We already had work scheduled for that day, but we really wanted to reach out to respond to this invitation.
We split up into different groups. Some of us went to the other fields first and some went right away. We had every possible person out in the field. Projects at the base here were put on hold for the day. The kitchen crew worked it out so they could come out for half the day. It was an “all hands on deck!” day.
We ended up picking about 15 tons for one of our more regular farmers, and then, praise the Lord, we were actually able to pick everything that the rabbi’s son had asked for. It took a huge effort but we did it. At the end, everyone was so happy that we did it; we had a little celebration, even though we were tired, with sore feet and sunburns. Someone turned on some music and lots of us started dancing and singing and clapping.
We would have been happy to have picked such a harvest any time, but this was extra special. We had just heard a teaching by Mr. Tommy about how Yeshua (Jesus) came to be a servant to the Jewish people. (Romans 15:8-12) For us to have the opportunity to also serve, and to show love in this way made us so thankful.
One of the thoughts/prayers that has been most on my heart over the years that I have come to Israel is the desire to “re-introduce” Yeshua to His people. Yeshua has been grossly misrepresented to them by Christians over the centuries, claiming that He was a person who came and introduced a new religion that is contrary to the Scriptures. The Church – Catholic and Protestant – has persecuted the Jewish people as the ones “who killed Jesus” (Even though Yeshua Himself said, “Therefore My Father loves Me, because I lay down My life that I may take it again. No one takes it from Me, but I lay it down of Myself.” John 10:17-18) They have shown Yeshua as blond haired, blue eyed, and fair skinned; with no connection or understanding of His Jewishness and His perfect obedience to God’s law.
So one of my greatest hopes is that as we serve here, Israelis around us will say, “Maybe Yeshua isn’t who we thought he was.” My prayer is to help to redeem His reputation here in His homeland, with His brothers. Maybe, because of this service to the rabbi’s son, his heart will start to see a different picture of who Yeshua was and is.

And this is the same hope held by all of HaYovel and all their volunteers. Make no mistake about it. It's why they do what they do.
Posted by Devorah Chayah at 1:00 PM