Parashat Noach: The End of the NWO and Their Missionaries of Assimilation

In this week's parashah we read not only about the destruction of the world in the Great Flood, but also about the first attempt of Mankind to create a New World Order (a re-creation of God's world in Man's image) and how HKB"H put a stop to them.  Like book-ends of history, the time has come to do the same again - in reverse order.

There is a saying - I don't know where it originated - that the world was first destroyed by water and in the future, it would be destroyed by fire.

The prophets of the ancient Hebrew Israeli Nation foretold how this Olam HaSheker (World of Lies) would end and a messianic Age of Redemption would begin.  A star figures prominently in the scenario that their holy words paint, but not a star from outside our solar system.  Our star!  The star that shines down upon us every day from the heavens over our heads - the Sun.


You have said, "It is futile to serve God, and what profit do we get for keeping His charge and for going about in anxious worry because of the Lord of Hosts?"
And now we praise the bold transgressors. Yea, those who work wickedness are built up. Yea, they tempt God, and they have, nevertheless, escaped.
Then the God-fearing men spoke to one another, and the Lord hearkened and heard it. And a book of remembrance was written before Him for those who feared the Lord and for those who valued His name highly.
And they shall be Mine, says the Lord of Hosts, for that day when I make a treasure. And I will have compassion on them as a man has compassion on his son who serves him.
And you shall return and discern between the righteous and the wicked, between him who serves God and him who has not served Him.
For lo, the sun comes, glowing like a furnace, and all the audacious sinners and all the perpetrators of wickedness will be stubble. And the sun that comes shall burn them up so that it will leave them neither root nor branch, says the Lord of Hosts.

[Rashi: For lo, the sun comes: This instance of יוֹם is an expression of sun, for so did the Sages state that there will be no Gehinnom in the future, but the Holy One, blessed be He, will take the sun out of its case;....]
And the sun of mercy shall rise with healing in its wings for you who fear My Name. Then will you go forth and be fat as fatted calves.
And you shall crush the wicked, for they will be as ash under the soles of your feet on the day that I will prepare, says the Lord of Hosts.
Keep in remembrance the teaching of Moses, My servant-the laws and ordinances which I commanded him in Horeb for all Israel.
Lo, I will send you Elijah the prophet before the coming of the great and awesome day of the Lord, that he may turn the heart of the fathers back through the children, and the heart of the children back through their fathers-lest I come and smite the earth with utter destruction.

And I will perform signs in the heavens and on the earth: Blood, fire, and pillars of smoke. The sun shall turn to darkness, and the moon to blood, prior to the coming of the great and awesome day of the Lord. And it shall come to pass that whoever shall call in the name of the Lord shall be delivered, for on Mount Zion and in Jerusalem there shall be a deliverance, as the Lord said, and among the survivors whom the Lord invites.

Now compare to what noted astrophysicist Dr. Paul LaViolette has to say, first in 2009 and then in 2019... 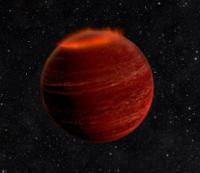 Just like the disruption of the common language they shared in times past stopped their evil plan, so in the very near future, the disruption [solar-flare-EMP-induced collapse of the electric grid globally] of their common language [computer code] will put a stop to their final evil plan.
[Picture: Artist's rendering of the sun encased in an accretion of dust brought in on a galactic core explosion superwave.]
~ SHABBAT SHALOM ~
In follow-up to the above: "God is for us a shelter and a strength, a help in troubles; He is very accessible. Therefore, we will not fear when the earth changes and when mountains totter into the heart of seas." (Tehillim 46.2-3)
A couple of disasters just waiting to happen...

Mount Etna is sliding into the sea. History shows that could be catastrophic.

If the volcano's flank suddenly collapses, it could trigger a tsunami that has the potential to devastate the region.  [Bye-bye Gaza!]
Hollywood fantasy? Tidal wave disaster is just waiting to happen

It has everything you could wish for in a cliche-ridden disaster movie. A beautiful volcanic island in the Atlantic is on the brink of catastrophic collapse, threatening to unleash giant waves that will wreak havoc around the globe within hours. And while scientists try in vain to make their concerns heard, the world's governments look the other way. But yesterday a leading expert claimed the doom-laden scenario was not only real but was being almost completely ignored by people in power.  [Bye-Bye London, New York, Washington, D.C.,...]

"...The 'star' will make a lot of destruction (tsunami waves hundreds of meters high in and Europe – .  Thousands of giant meteors will fall to earth, dry land will sink, darkness will cover the world…"

Posted by Devorah Chayah at 9:02 PM