THE FACE OF AMALEK

After the Jewish people crossed the Red Sea, they encamped in Rephidim, a barren location in the Sinai Desert. The people thirsted for water, and G‑d provided a miraculous well of water to accompany them on their journeys.
While the Jews were still at Rephidim, recuperating from their escape from Egypt, the nation of Amalek launched a vicious surprise attack on them—though the Jews had no designs on Amalekite territory and were not even headed in that direction.
Moses commanded his disciple Joshua to take an elite troop of soldiers into battle the next day. Moses himself ascended a nearby mountain to pray for G‑d’s salvation.
The Jews defeated Amalek in battle, killing their strongest warriors while allowing the others to return home.
Following the battle, G‑d commanded Moses to record the story of Amalek’s treacherous attack for posterity, and to enjoin Moses’ future successor, Joshua, to remember the attack as well. G‑d promised to completely wipe out the memory of Amalek from the earth, and to wage an eternal war with Amalek in every generation. G‑d swore that His name and throne would not be complete until Amalek was destroyed.
Forty years later, as the Jews stood poised to enter the Land of Israel, Moses reminded the Jews of the command to combat Amalek.
...The Torah lists two mitzvahs regarding Amalek:

Amalek's main problem with the Jews goes to the fact that they are God's chosen nation through whom He makes Himself known to the world and through whom He establishes His sovereignty over mankind.  This is essentially what Amalek objects to and this is why Jews have traditionally been their main target.  Their real war is against HKB"H.  We know this from Shemot 17.16...

"For the hand is on the throne of God:  Hashem maintains a war against Amalek, from generation to generation."

IS KLAUS SCHWAB THE FACE OF AMALEK IN THIS GENERATION?
I'd never heard of him until two days ago, so you might well ask, as I did, who is Klaus Schwab? 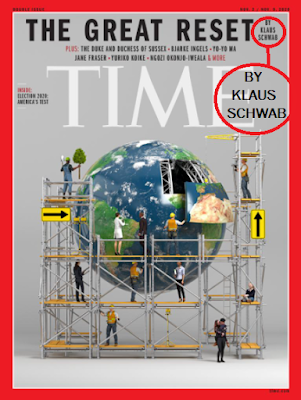 Professor Klaus Schwab was born in Ravensburg, Germany in 1938. He is Founder and Executive Chairman of the World Economic Forum, the International Organization for Public-Private Cooperation. He founded the Forum in 1971, ....

...he argued that the management of a modern enterprise must serve not only shareholders but all stakeholders... to achieve long-term growth and prosperity. Schwab has championed the multistakeholder concept since the Forum’s inception, and it has become the world’s foremost platform for public and private cooperation. Under his leadership, the Forum has been a driver for reconciliation efforts in different parts of the world, acting as a catalyst of numerous collaborations and international initiatives. (Sounds like "The Abraham Accords" to me.)

...In 2004, with the financial contribution received as part of the Dan David Prize, [there had to be an Erev Rav connection] he established a new foundation: the Forum of Young Global Leaders (for leaders under 40). Seven years later, in 2011, he created the Global Shapers Community (for potential leaders between the ages of 20 and 30). The purpose of the two foundations is to integrate young people as a strong voice for the future into global decision-making processes and to encourage their engagement in concrete projects that address social problems.
Schwab has encouraged the establishment of communities providing global expertise and knowledge for problem-solving. Among them is the Network of Global Future Councils, the world’s foremost interdisciplinary knowledge network dedicated to promoting innovative thinking on the future
The Forum employs over 700 people, with its headquarters in Geneva, Switzerland, and additional offices in New York, San Francisco, Beijing and Tokyo.
An engineer and economist by training, Professor Klaus Schwab holds doctorates in Economics (summa cum laude) from the University of Fribourg, in Engineering from the Swiss Federal Institute of Technology, and a Masters of Public Administration from the Kennedy School of Government at Harvard University. In 1972 he became one of the youngest professors on the faculty of the University of Geneva. He has received numerous international and national honours.
His latest books are The Fourth Industrial Revolution (2016) [See "German Strategy" there], a worldwide bestseller translated into 30 languages, and Shaping the Fourth Industrial Revolution (2018).  [Not mentioned here is the most recent book, COVID-19: The Great Reset (2020).]
During the course of his wide-ranging career, Schwab has received numerous honours. He holds 17 honorary doctorates, and national medals of honour, including the Grand Cordon of the Order of the Rising Sun of Japan, the Grand Cross with Star of the National Order of Germany and the Knight of the Légion d’Honneur of France. He was also knighted by Queen Elizabeth II – Knight Commander of the Order of Saint Michael and Saint George (KCMG).

Can you imagine the size of EGO a person must have to appoint himself master of the human race such that he tells us any thought we have of going back to our former mode of life after the plandemic is "fiction?"  And I still don't know if he is at the top of the pyramid or just another public face assigned as a stand-in for whoever that might be.  However, the German connection is very compelling.

Rabbi Winston said ... Germany will begin to express their unique national character. The rabbi stated that every nation has a unique spiritual nature, noting an obscurity that describes that of Germany.
Rabbi Winston related a portion from the Talmud (Megillah 6b), which discusses “Germamia”, explaining that this is an aspect of the nation of Edom, which, if brought together, would have unlimited power to accomplish their goal of destroying the world. Most notably, the Jewish people’s Biblical nemesis, Amalek, is descended from Edom.
Rabbi Shlomo Yitzchaki, a medieval rabbinical authority known by the acronym ‘Rashi’, explained that Germamia is a nation which, if unified, would cause the destruction of the world.
Shabbethai ben Joseph Bass, a 17th century Biblical commentator known as the Siftei Chochomim, identified Germamia as Amalek, or in modern terms, Germany.
“This is a form of prophecy, though it only hints at what is to come,” Rabbi Winston explained. “There is certainly an aspect of Germany that is connected to that aspect of Amalek. They sought the destruction of the entire world even at the expense of their own country in World War II, and nearly succeeded.” (Source)

It's worthwhile to re-read my February 2019 blog post on the Iran-Germany connection. (The name "Iran" is from the word Aryan and Persia's historical record claims that they are the original Aryans.)  Here is an excerpt...

... Iran and Iranians were strongly connected to the Holocaust and the Hitler regime, as was the entire Islamic world under the leadership of the mufti of Jerusalem.
Iran's axis with the Third Reich began during the prewar years, when it welcomed Nazi Gestapo agents and other operatives to Tehran, allowing them to use the city as a base for Middle East agitation against the British and the region's Jews.
...Relations between Berlin and Tehran were strong from the moment Hitler came to power in 1933. At that time, Reza Shah Pahlavi's nation was known as Persia. The shah became a stalwart admirer of Hitler, Nazism and the concept of the Aryan master race. He also sought the Reich's help in reducing British petro-political domination.
So intense was the shah's identification with the Third Reich that in 1935 he renamed his ancient country "Iran," which in Farsi means Aryan and refers to the Proto-Indo-European lineage that Nazi racial theorists and Persian ethnologists cherished.
The idea for the name change was suggested by the Iranian ambassador to Germany, who came under the influence of Hitler's trusted banker, Hjalmar Schacht. From that point, all Iranians were constantly reminded that their country shared a common bond with the Nazi regime.

is without a doubt at the head of the NWO.

I know this question will be off-putting to many people, but my inquiring mind needs to know, is the The Fourth Revolution in Torah Learning somehow part of all this, too?  If anyone has a serious answer to this, please respond in the comments section below.  Thanks!
Posted by Devorah Chayah at 10:55 PM