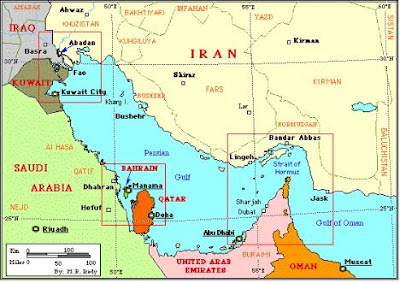 As explained in yesterday's post, Building Tension 3, as of 17 Tamuz, we have officially entered into a period known collectively as The Three Weeks (yes with caps). In Hebrew, it's called Bein HaMetzarim or "Between the Straits." A "strait" is a narrow place. You can see one in the picture above. It's called the Strait of Hormuz and from the map, you can tell that its name derives from the drastic narrowing of the water passage at this point.

All three of the "Building Tension" posts from yesterday reflect the cosmic energy of The Three Weeks, but guess what? Maybe, for the first time in two thousand years, it's the Western nations, aka Exile Edom, which are being forced into The Strait.

The Navy is rushing dozens of unmanned underwater craft to the Persian Gulf to help detect and destroy mines in a major military buildup aimed at preventing Iran from closing the strategic Strait of Hormuz in the event of a crisis, U.S. officials said.
Posted by Devorah Chayah at 10:18 AM