"The Militia of the Pope"

Since being clued in by Binyamin's last message that it is the Jesuits at the top of the New World Order pyramid, I've been doing some research. Since these are the people apparently really running the show, I thought you might like to know what I've found. This topic will cover a few posts, so this is just to get us started...

The Most Powerful Man In The World? “The Black Pope”?

So, you thought you were pretty well informed by now about all of the main players on the “conspiracy” playing field? You’ve maybe been hearing for years about ... the various elements of society who control our world from behind the scenes.

The Black Pope is the ‘President of the World’ 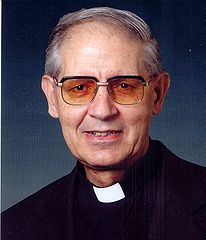 
He is the most powerful man on Earth, who rules over Maritime Laws (business). He controls the banking system, Freemasonry and the Secret Services (CIA, FBI, NSA, SIS, MI6, Scotland Yard, Mossad, CSIS, DGSE, FSB). The Vatican owns 60% of all Israel lands and the Land of the Temple Mount for their Third Solomon’s Temple where they want their throne....


“Some of the biggest men in the United States, in the field of commerce and manufacture, are afraid of something. They know that there is a power somewhere so organized, so subtle, so watchful, so interlocked, so complete, so pervasive, that they had better not speak above their breath when they speak in condemnation of it.” – Woodrow Wilson

So who is this subtle, complete organized power that Wilson is talking about? The answer to that my friends is the Jesuits.

Who are the Jesuits you may ask? Arent they just missionaries, priests and general do-gooders who establish schools, universities and pride themselves in being pillars in the community? If so, then why was The Jesuit Order abolished in over 80 countries in 1773? J.E.C. Shepherd states that “Between 1555 and 1931 the Society of Jesus [i.e., the Jesuit Order] was expelled from at least 83 countries, city states and cities, for engaging in political intrigue and subversion plots against the welfare of the State, according to the records of a Jesuit priest of repute [Thomas J. Campbell]. Practically every instance of expulsion was for political intrigue, political infiltration, political subversion, and inciting to political insurrection.” They are overlords of chaos. In a nut shell the Jesuits are Warlords, Assassins, Teachers, Infiltrators, Tyrants. They tried their hand at global domination with the “League of Nations” but it failed, now they are trying again, under a new name…The United Nations, and its about to work!

What people are not understanding is that the Jesuits command the White Pope and the Vatican City, Obama /Bush’s/ Clinton’s / Blair’s / Peres/ Rudd / Jintao / Sarkozy / Medvedev (and frankly every government on earth) including the the evil Council of Trent, CFR, Illuminati, the Zionists, the Bilderberg group, the Freemasons, the Knights of Malta, the Knights of Columbus, the Knights Templar, Council of 300, and every intelligence organization in the world all have ties to the Jesuit Order and more specifically, the Superior General of the Jesuits known as The Black Pope Adolfo Nicolas who as of January the 19th, 2008 succeeded Peter-Hans Kolvenbach as the 30th Superior General of the Jesuit Order.

I seem to recall in one of the messages, although I couldn't locate it, where it was said that there are seven people at the top with one head over them...

...The Superior General of the Jesuits The Black Pope, Adolfo Nicolas and his 6 generals control the “White Pope” Pope Benedict XVI and the Vatican.

Is this a possible reason for flooding the US with traditionally Catholic Mexicans and Latin Americans?

I don't think Obama had that in mind when he was seeking how to get more voters.

Rabbi Marvin Antelman ז"ל and Barry Chamish wrote volumes about the above topic....

Of course, this stuff has been known for the longest time, good thing it is finally going mainstream - I mean, not to your average 'conspiracy theorist', i.e. well informed person, but people who until now had no clue. Welcome to the real world.

I think you should read up about the OPUS DEI.
that is where the power over the Jesuits and the pope is exercised.

This is quite hard to prove because it is by definition secret. If they are secretly running the world, how do you prove it? It could be as fantastical as the idea that the Jews run the world.

Some of them do.

Yes it is Anon. If half of the 1 billion catholics were to tithe $1 every Sunday, that's a half billion dollars per week. And several religiously do the 10% tithe. And the church pays no taxes. The Vatican is the wealthiest country on earth.

Yeah, I rememebr that, but I had the impression they were just one of the major players not the head of the whole monster.

It's worthy to note that most if not all US states were established by the Jesuits. Look to their mottos and flags. Most in Latin. You have to look for this info. Fortunately I had the World Book Encyclopedia circa 1959, before this data was hidden from plain sight where it goes into detail how they scouted the area, set up schools, commerce, churches one step at a time taking over from the Natives till the entire territory became xtian.