In other words, if the Jews will agree to leave the Torah, they will be tolerated in the New World Religion and even be honored as the third pillar of "Abrahamic Faith" along with Xianity and Islam.

Also mentioned in that earlier blog post was the plan to inaugurate the AMEN House of Prayer
at the beginning of a three-week "cultural festival" called Mekudeshet:

"...for one week in September, a small structure of four walls and a bit of balcony, called the Alpert Youth Music Center will become AMEN, a home for something that has never before been attempted in the Holy City – a place of worship for the three great monotheistic religions “who share a passion for Jerusalem in which they will co-exist temporarily under the wings of the Almighty.”   (photo h/t Y.Y) 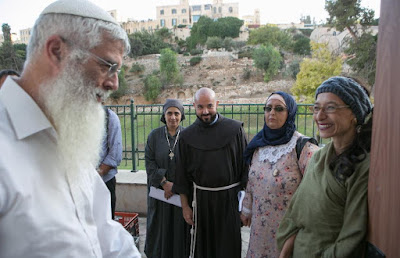 Under the radar, away from the public eye, a small clutch of religious leaders have been gathering for years to believe, to hope and to reconnect via the atavistic language of faith.

...The concept they have created, which the believing public is invited to join between September 5 to 11, is part of a festival known as Mekudeshet, Blessed, part of Jerusalem’s Season of Culture."

...We have sought out ways to present Jerusalem as a place that is both holy and secular.

...Jerusalem obligates us, always, to step off the well-trodden paths and to absorb both the bad and the good;....

...we understand that after all is said and done the essence of Jerusalem is contained within the Hebrew root for the words sacred and holy. It is from holiness that faith, hope, and the aspiration for tikkun olam (the concept of repairing the world) derive; holiness is the source of divisiveness, exclusion, and hatred; holiness is both the spring from which all the good of Jerusalem bursts forth and the foundation stone of all that is bad.

...we feel ready and mature enough to reach into Jerusalem’s heart of hearts and propose a more expansive and profound interpretation of the words holy, sanctification, and sacredness.

...We will try during the three weeks of Mekudeshet—or actually at any given moment— to go back to the source, to the spring, to the core, and to the heart, and to call on anyone who believes—no matter what they believe in—to come to Jerusalem. Come and find yourselves. Come in peace.


I don't know if this was also part of that, but it fits the same agenda: Israeli Leaders Meet With Leaders of Eastern Faith Traditions.  (photo h/t/ R.L.) 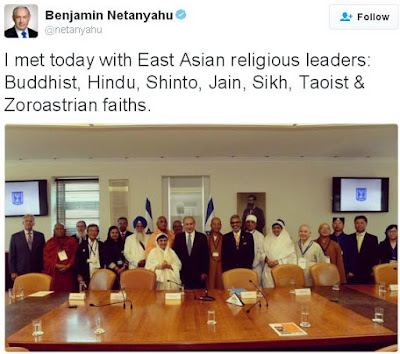 According to Binyamin Golden, an autistic young man who is known for his "messages from Heaven" says this is the final test. Will we cooperate in being assimilated out of existence? Will we let go of our hold on the Holy Torah and embrace instead the Brotherhood of Man? God forbid!

Kedushah cannot be redefined as both holy and profane, both good and bad. A choice is required of each of us. The Torah bids us choose - blessing or curse, life or death. There is no both!

And there is no Torah Judaism combined with other "faith traditions". It's US or THEM, but there's not BOTH!

From Part 2 of The Coming World Religion, foundational writings for the "New Age":


The Jews, who refused even to leave their "Age of Aries" (the time of the Torah) to enter the Age of Pisces, (to merge with Christianity) are doubly behind in their evolutionary development.

..A necessary preparation for the leap upward is the isolation, refinement and preservation of the top 10% of humanity as the new "seed". The major New Age efforts at indoctrination are therefore designed to get the other 90% of humanity to accept this elitist selection as necessary and just, and if possible to secure their cooperation in the purge.

...High on the list of those 90% which must be eliminated are the Jews who insist on Jewish identity: "When humanity has solved the Jewish problem (with the understanding and cooperation of the Jew)... it will do so by fusing the problem in one vast humanitarian situation. When that happens [the dissolution of the "Jewish race"], the problem [the presence of "separation" and "hate" in the world] will be rapidly solved and one of the major difficulties will disappear off the face of the earth. Racial fusion will then be possible... and then there will be peace on earth."

...When Jews forget that they are Jews, "we shall see a very different world."

Of course, what they plan will never come to fruition because HKB"H will not allow it. However, it is after all A TEST and many individuals, some with very good intentions, will fail this FINAL EXAM for Life. Don't let it happen to you. Try not to let it happen to anyone you can possibily influence.

Choose blessing, choose life, choose separation in accordance with the demands of our Creator and His Holy Torah.
Posted by Devorah Chayah at 11:23 AM