Ask anyone in my family. I kept telling anyone who would listen back in May that the planet Venus looked weird to me. I asked them to take a look and see what they thought. It looked abnormally large and bright and it seemed to be getting more so as time went on. After staring at it for awhile I could make out what looked like spikes of light radiating out from it. Then, I thought, no this is crazy. But, I took a photo of it (Sunday, May 31, 2015, 10:25:24 PM) and then forgot about it as 'Venus' disappeared into the daylight hours and became invisible.

Well, two days ago when I downloaded some other pictures, I found this picture that I had taken of 'Venus' and this is what it looked like when I opened it... 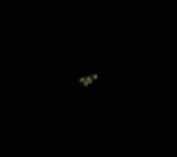 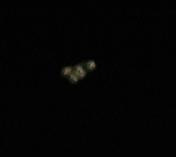 When I doubled the size of that image, this is what I got... 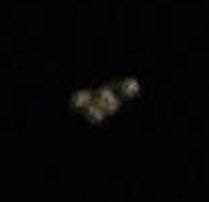 Now, somebody tell me - is this Venus or not? And if not, what the heck is it??? And if you were wondering, Venus and Mercury are the only planets that have no moons!
Posted by Devash at 9:36 PM

Perhaps this is the comet with satellites that is supposed to be heading in our direction?

Wouldn't that have to be really close to get that kind of image without a telescope?

I hadn't even thought of that, but you must be right.

You mean Nibiru? Or maybe it is something coming in from behind Venus???

Found this, NIBIRU PLANET X BEHIND VENUS! LARGE OBJECT IN THE W/NW SKY PART II THIS CANNOT BE VENUS BY ITSELF!
https://www.youtube.com/watch?v=ABqSTrhzX4Y

There is a sky watcher who goes by the name of Suspect Skies. He posts videos every few months. I've seen images similar to the one you saw, in his videos. I cannot vouch for the authenticity of any of it. I think some images are drones and natural phenomena and some may be manufactured by bored people. I'll let you decide.

What was the exact date of the photo?

On July 1, and then again on Aug. 4, Venus and Jupiter were very close, almost next to each other in the sky.

Could it have been that?

No. I watched the convergence, but I didn't photograph it.

It's not UFOs. It stayed in the same spot every night for months. It's got to be Venus, but there's more there than just Venus.

Hi,
I really don't know much about how these things work, but I'm just curious: Planets and especially comets move pretty fast; if it wasn't the Venus we all know, wouldn't it be VERY close right now or very visible in another part of the sky?

I don't know much either, but I do know that Venus and anything located near it, is now only 'visible' during daylight hours.

"In August 2015, Venus moves out of the evening sky and into the morning sky. This happens officially on August 15, 2015, when Venus will pass nearly 8 degrees south of the sun as seen from our earthly perspective. If you are blessed with an unobstructed horizon in the direction of sunrise, you’ll probably see Venus low in the east, about an hour before sunrise, sometime during the last week of August, 2015."

That is very interesting. What time was it taken? What was the direction? In relation to the moon - placement? Can I share this with a group? They might be able to shed some light on the phenomenon.

On another note, what d'yall think about an asteroid heading to Puerto Rico on Yom Kippur. Yes, yes, Nasa denies - they also deny UFO's. Your thoughts please.

Then there was this

That's pretty helpful information, Devash.
Since I am sometimes woken up around that time of morning, it will give me something to look forward to ;)

Around 9 pm looking west. I don't remember the phase of the moon or where it was. There's no question that it was where Venus was suppsoed to be night after night after night for months, but it seemed to be getting bigger and brighter over time and to have spikes of light shooting out from it. That's why I took the picture and then I never downloaded it to look at it until the other day.