HUMAN TRIALS? YES; PERMISSION GIVEN? NO! 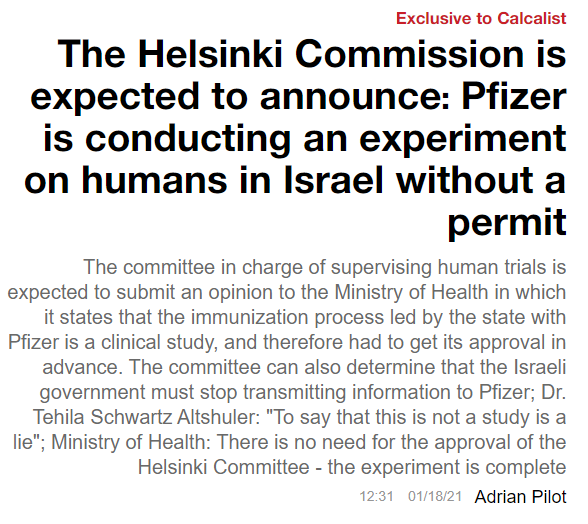 [See this article in its entirety HERE.  Note: This is a Google translation of the original.]

"A reading of the contract signed between the Israeli government and Pfizer shows clearly and unequivocally that this is a clinical study for all intents and purposes, and thus, it had to be approved by the Helsinki Committee," a senior official told Calcalist. What will be written in the committee's opinion.  "There is nothing wrong with clinical trials, on the contrary, but clinical trials (human trials) must get the committee's approval, and, of course, from the people on whom the trial is being conducted while giving the right to refuse to be part of a trial. These are very basic things."

Prof. Eitan Friedman, chairman of the Helsinki Committee, refused to comment on the publication and told Calcalist that the committee would convey its position in an orderly manner and in the usual ways - and not through the media. Since the committee is a statutory committee (established by virtue of the law), the practical meaning is that it will determine that the experiment on humans that Pfizer is currently conducting in Israel is illegal.

According to the Ministry of Health's website, the Supreme Helsinki Committee for Medical Experiments on Humans "is a statutory, multidisciplinary committee composed of physicians and researchers from various fields, jurists, ethicists and public figures and deals with proposals for genetic research in humans, in accordance with public health experiments. 1980 (hereinafter: the 'Public Health Regulations'), in accordance with the Helsinki Declaration, in accordance with and pursuant to the Genetic Information Law, 5761-2000 and the Prohibition of Genetic Intervention (Human Cloning and Genetic Alteration in Reproductive Cells) Law, 5769-1999, and accordingly To conduct medical experiments in humans. The committee also examines policy in its field of practice. "

The expected letter from the Helsinki Commission is of far-reaching significance. First, the committee can determine that the Israeli government must stop transmitting information to Pfizer - something that could cause Israel to violate a contract. If the government decides to ignore the committee's directive, every Israeli citizen will be able to submit to the High Court on the matter.

The committee can also demand that all Israeli citizens be informed that the results of the vaccine will be passed on to a third party and also oblige the Ministry of Health to seek the approval of the vaccinated on the subject.

In addition, neither the committee nor the citizens of Israel have any need to use legal tools: a short letter from the committee announcing that it does not approve the experiment - could destroy Pfizer's and the Israeli government's "project", as following that Pfizer letter you could not contact the FDA and seek the final approval for the vaccine. It is inconceivable that the FDA would finally approve a vaccine based on a clinical study rejected by the Israeli Helsinki Committee.

"Anyone who might claim that this is not a study is simply a liar. This is the most extensive study of human beings in the 21st century. Israel is becoming the experimental field, not to mention the backyard for the whole world. It may be a beautiful and altruistic thing - but citizens had to share Israel is doing that. " This is how Dr. Tehila Schwartz Altshuler explains, who supports the position of the Helsinki Committee in a conversation with Calcalist.

This news is just too good to be true.

Posted by Devorah Chayah at 5:00 PM