This Plandemic IS the Implementation of the Fourth Industrial Revolution

“COVID-19 has accelerated our transition into the age of
the Fourth Industrial Revolution."    ~ Klaus Schwab ~

Keep this uppermost in mind - every step "forward" for humanity via technological development removes it further from The Source - HKB"H.  The technology of the Fourth Industrial Revolution is meant to enable mankind to realize its own godhood.  The "New World Order" envisions a world without HKB"H.  With the new technologies that can track us, listen to us, read our minds and even put the thoughts in our heads, those with access will be virtually Omniscient (All-knowing), Omnipresent (All-seeing) and Omnipotent (All-Powerful), G-d forbid!

Israel is meant to play a leading part in this plan and Jews who are not prepared to get on board, i.e. anyone who has allegiance to HKB"H, will have to be eliminated.  We have enemies - very powerful enemies.  We have to stop being naive sheep and recognize the wolves for what they are.

Recognize that Netanyahu was put in power just for this and that Trump is nothing more than a Puppet with no real power of his own and everything he claimed to do "for Israel" was another nail in our coffin as a Jewish State!  Furthermore, you have nothing to fear from Biden because he is not intended to be the president - he is too old and too senile to fulfill that role.  He is there to ease the way for Kamala Harris who could never get elected on her own.  But, it's all irrelevant anyway as these are simply the public faces of those who prefer to remain in the shadows.

"We are at the beginning of a new economic and social period, which I see as the fourth industrial revolution, one unlike any preceding period within the industrial era. A staggering confluence of technological innovations across the physical, digital, and biological spheres are creating disruptive transformations that will leave no aspect of global society untouched. The exponential speed, breadth, and depth of these changes herald shifts in entire systems of production, management, and governance and are transforming the way we work, live, worship, and express our human identity. The constant integration of technology in everyday life is powering major changes in social structure, culture, and behavior, reshaping individuals’ sociability and networks in ever-changing patterns." 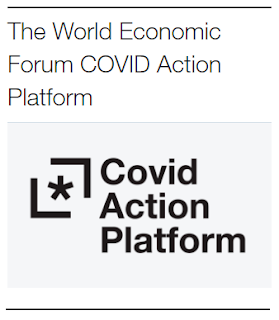 You can hear Netanyahu's views on this and how he plans to bring the Chareidim and the Arabs on board by clicking the image below and going to the 0:31:21 minute mark.  He also explains how the "peace deals" with UAE and Bahrain, etc. are part of this implementation. 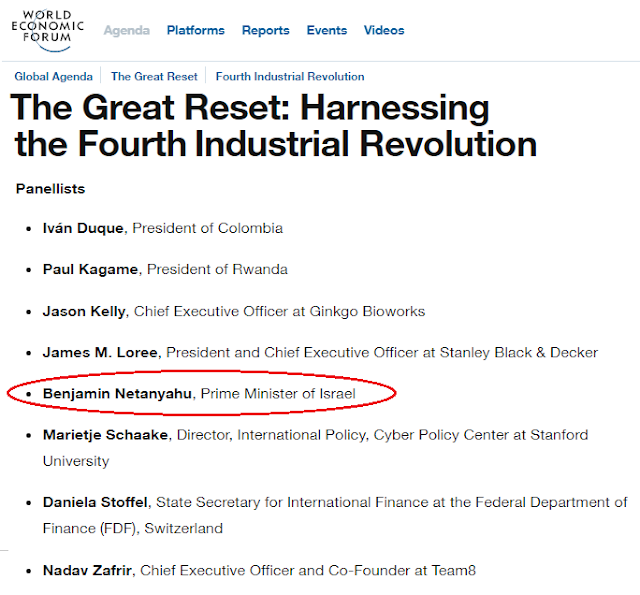 Pay very special attention to the moderator's comments starting at 0:41:16 ...

"Do you know what the three heads of state and governments here have in common ... in all three of these countries [Colombia, Rwanda and Israel] we have established the Fourth Industrial Revolution Center of the World Economic Forum, so you are already connected with the network and since you mention also the UAE, that's the fourth country where we have now established the Center in Dubai for the Fourth Industrial Revolution...."

...In order to help government regulation to adapt to the rapidly changing technology, the World Economic Forum founded a network of Centers for the Fourth Industrial Revolution. This network aims to create and share knowledge, experience and best practices related to innovative technologies’ regulation, via collaborations between governments, leading corporations, private sector and experts from around the world.
The C4IR network began operation in San Francisco in 2017 and operates centers in China, Japan and India. Alongside the official centers, there are other countries that joined as ‘Affiliate Centers’ including South Africa, Colombia, Brazil, the UAE, Norway and Saudi Arabia.
In January 2019, as part of Government Resolution No. 4481, it was decided that the State of Israel would join the C4IR network and the Israeli Center for the Fourth Industrial Revolution was therefore established in January 2019 as an Affiliate Center in the C4IR network.
Participation in the network will enable to advance the readiness of the Israeli market to new technologies, specifically innovative disruptive technologies that will significantly influence life in Israel.  [Like putting all the independent (non-chain) stores and restaurants out of business.]

Maybe next time, iy"H, we'll talk a bit about Why Israel?

Posted by Devorah Chayah at 8:43 PM