It is our fellow Jews who have opened the gates to the enemy and now sit and "feast" with them while the rest of us sit and mourn their betrayal. 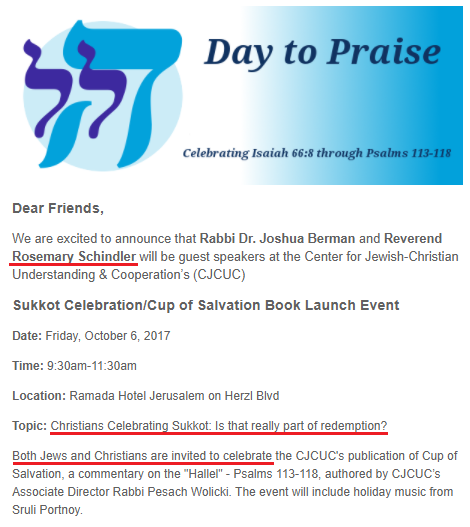 This event already took place day before yesterday, but it's important you know what is going on and who is involved. This is only the second or third time they've had it. These Jews who want to play shadchan between Jews and Christians keep coming up with new events to have on an "annual basis" so that every single day of the holiday - the entire holiday of Sukkot - will be turned from a celebration between HKB"H and His holy nation into some warped and twisted celebration of universal brotherhood, God forbid!!

I've written about Rosemary Schindler before right here. It's very worthwhile to go back and read it again. She gets a lot of mileage out of that name in Jewish circles, as you can well imagine - a "relative" of Oskar Schindler who is famous for saving Jewish lives during the Holocaust. But, I want you to know how she is related and then you will have some idea of the lowness of these people who are trying to attach to us. There is simply no depth to which they will not sink - to make cynical use of this man's name and memory for the purpose of misleading Jews towards a spiritual death.

Her ex-husband's grandfather was Oskar Schindler's second cousin. She has been divorced from this family for more than fourteen years and she has remarried! Yet, she continues to use the name because it opens the door to Israeli Prime Ministers and Knesset Members and US Congressmen, etc. This is how Christians operate among Jews - through deviousness and deception.

Her Skyline Church gained a "Messianic Jewish Rabbi" named Joel Liberman who is "dedicated to evangelizing the Jewish people" when - true to the One New Man vision - Skyline Church and Tree of Life Messianic Congregation merged into one entity. (Source)

There are close ties between Hayovel and Schindler-Garlow. They regularly host her church tour groups in Har Brachah.

They were also together in Washington, DC for the inauguration of President Trump (along with Yehudah Glick). And their growing influence does not end there. 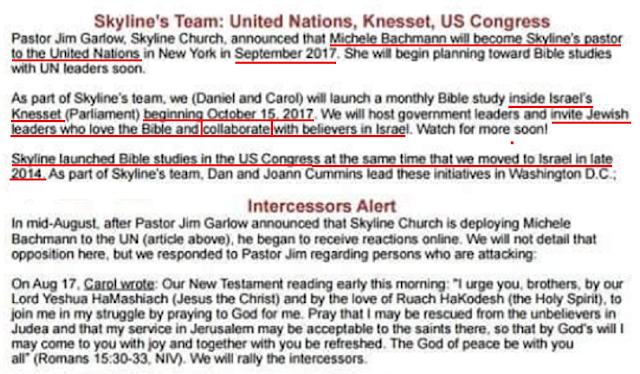 This is an invasion. It is an attempted takeover. And it goes right to the top! 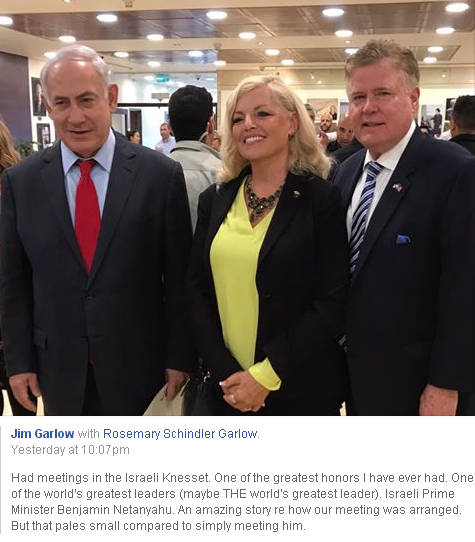 Rosemary Schindler and Hayovel have something else in common. They all think they are going to settle here in our Holy Land and establish their avodah zarah here for keeps. But, I've got news for all of them. It ain't ever gonna happen! They can forget about taking refuge here. Like all the rest of the gentile impurity, the Almighty will remove them.

This is part of the War of Gog uMagog at Sukkot! Are you aware? Do you care? Pray for our deliverance! And stay far away from them!!