Wall Street, the Temple of Bel and Geulah

Guest Post by Itzhak Drahy (as translated from the Hebrew by Devash)...

Wall Street, the Temple of Bel and Redemption at its peak:

1) About two weeks ago the world's newspaper headlines reported with sadness on the destruction of the important temple in Tadmor (Palmyra in Syria) - the Temple of Bel (Ba'al).

2) At the same time, more or less, we saw the strong fall in trading on Wall Street - within two days 888 points

3) In the story of the Exodus from Egypt, the Sages teach us that when Hashem decides to overthrow a nation, He first destroys their gods. In tractate Avodah Zarah, we learn that the abolition of idolatry can be carried out only at the hands of a gentile in order that it will be considered completely abolished - if a Jew does it, there is no abolition of idolatry here.

4) In a search of "Temple of Bel" in Wikipedia we see that the idol named Bel was also known as Ba'al Peor familiar to us from the sources:

a. The Children of Israel engaged in an act of prostitution with the daughters of Moav at Shittim in Parshat Balak: It all starts with trading in the marketplace, in the shops where they displayed new things that the Children of Israel didn't normally see in the desert and it pulled them in. It continued to worship of Ba'al Peor himself and finished with prostitution with the daughters of Moav.

b. His worship is described in Tractate Sanhedrin and other places - a repulsive ritual, humiliating, but easy to perform and especially good for the lazy, whoever eliminates his body waste in front of him worships him elegantly (and therefore once again the Mishneh even if it means to degrade Ba'al Peor whoever opens himself wide in front of him is guilty because this is exactly how he is worshiped...)

5) The idol named Bel, as stated before, is none other than Ba'al Peor and is also called Belphegor. A search of the term "Belphegor" in Wikipedia brings us to a surprising result. What does he want to receive from Bel/ Ba'al Peor/Belphegor whoever worships him in the repulsive ritual mentioned above? Health? Protection from all kinds of threats? Fertility? No. He wants to obtain what most of the world yearns to obtain today: easy money, and in which way? Whoever mentions Belphegor receives from him ideas for inventions because no one in the world ever got rich competing with other people and in such a way this demon succeeds in sowing jealousy and hatred among people!

6) From here, understandably, is the significance of his religious ritual: when a Jew takes something from the material world, he sanctifies it and raises it up to a spiritual level that it didn't have. Conversely, whoever worships Ba'al Peor invents new things and in this way creates waste - industrial waste that today we understand it destroys the world, spiritual waste of the pursuit of money and materialism, jealousy, rivalry and destruction of the world.

7) The easy enriching inventions are not from work, but from speculation and the invention startups: we've arrived to Wall Street and the bursas, the Moabite tent of today. It's interesting that we didn't see with our holy fathers and our rabbis that not one got rich from inventions or from "a thing no one else did" - they all were busy with what many others were doing, raising sheep, agriculture, professions that "everyone needed" and without many innovations. And if sometimes they got rich, it was because Hashem blessed them there with what they had, or by way of "various realities". They were busy with what the world of truth needs, they didn't create new needs and took from the world what the world is capable of giving, not creating a lot of waste, and not resulting in any destruction, not spiritual and not physical. On the contrary, they guarded the world from all aspects.

8) It's interesting in the context of what is mentioned above to see the pictures of the temple that was destroyed together with the fall of Wall Street. 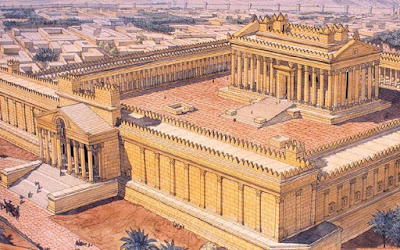 This is a picture of the Temple of Bel at the time it stood upon its hill and the Ba'al Peor religious ritual existed on it. It's impossible not to see within this structure its "opposite structure": Our Temple that in it materialism was elevated upwards, compared with here where materialism was brought down lower. The architectural imagination jumps to the eye. Really it compares with it. It's also interesting that the idol Bel/ Ba'al Peor/ Belphegor was also called Marduk, a Babylonian idol also called "Sun Calf". Sun Calf, Golden Calf like the autistics say about running after money, Wall Street, Temple of Bel, it all appears connected and even identical and were destroyed simultaneously in recent days or at least beginning the final destruction in preparation for the final kingdom of Hashem in His world really in these days. To finish, a few architectural photos of the Temple of Bel and the NYSE structure on Wall Street - really the same thing! 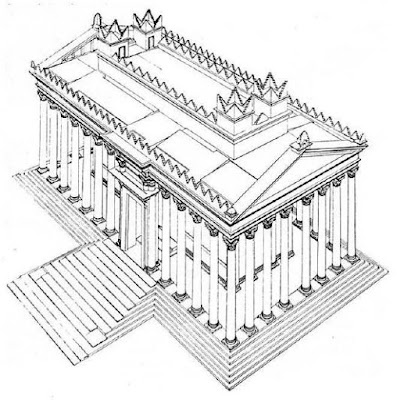 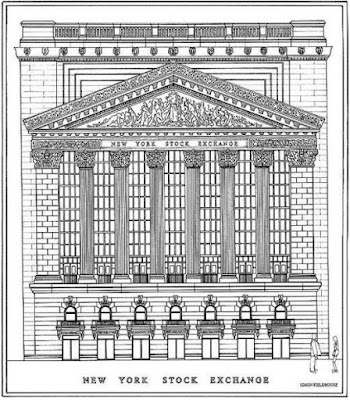 A fall of 888 points within two days, 8 columns on the facade like on the Temple of Bel that has two facades like this - excuse me - it had...

It should be His will, in the same way we do not have any doubt that we will merit in these days the complete redemption in mercy.

NOTE from Devash: This is how it looked recently before ISIS totally destroyed it (see below). It's interesting that only one colonaded side remained and even though it was the long side that had 12 columns originally, 8 were still standing. 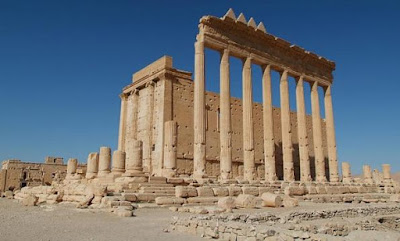 Compare this photo to the first drawing above. Only the gate remains.

THANK YOU, ITZHAK FOR SHARING THIS AMAZING CONNECTION!
Posted by Devorah Chayah at 9:19 AM