Have We Reached The End Of The Yishmaelite Exile?

Commenter Elliot pointed out the following regarding Thursday's stampede during the Islamic Hajj: "Check out today's portion of Chumash with the news from Saudi Arabia; verse 35 'Yom Eidam'; incredible!"

"Vengeance is poised with Me, and it will pay at the time their foot stumbles. For the appointed day of their reckoning is near, and what is destined for them hastens". 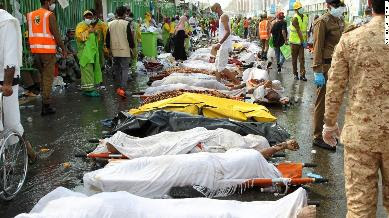 What should have been a day of celebration Saturday was tempered by grief as millions of Muslims marked the final day of Hajj without hundreds of fellow worshipers.

At least 769 people were killed in a stampede in Mina, Saudi Arabia, on Thursday, according to Saudi state-run SPA news agency. Another 934 people were injured.

Saudi officials say they're investigating what caused hundreds of pilgrims to get trampled.

Their "appointed day" is called "eidam" in the Chumash and the holiday they were celebrating is one of two on their calendar called "Eid". The pasuk says "at the time their foot stumbles" and people were trampled.

I would go further. I would include the next pasuk which says...

When Hashem will have judged His people, He shall relent regarding His servants, when He sees that enemy power progresses, and none is saved or assisted.

This happened the day after Yom Kippur when Hashem had finished judging His people Israel.

I checked and although there have been similar incidents at the Hajj in the past, only one had more fatalities and none of them had taken place any time around Yom Kippur.

Let's hope this really is a reflection of where we stand in relation to the events described in Parshat Ha'azinu, because this is what is next...

"O nations - sing the praises of His people, for He will avenge the blood of His servants; He will bring retribution upon His foes, and He will appease His Land and His people."

[For a much better and more detailed presentation of this idea, please see Yeranen Yaakov's blog.]