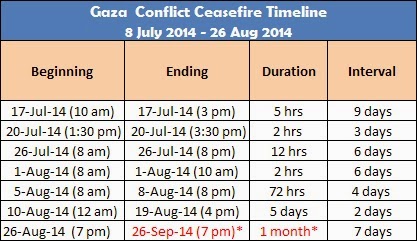 I was thinking about how I've never seen a conflict like this that was interspersed with so many ceasefires and calls for ceasefire. The stopping and starting - on again, off again - character of this latest war made me think of labor contractions (otherwise known as "birthpangs").

I wondered what it would look like if I could graph a timeline of the ceasefires, so I went about collecting the data. And let me tell you, it wasn't easy to tell when it was ceasefire or not because more often than not, firing went right on during the ceasefires.

I couldn't figure out how to make a graph, but from this chart that I made and pictured above, it is clear that the duration of the ceasefires were getting longer, while the interval between them tended generally towards getting shorter. This reflects the character of contractions as labor progresses.

Maybe this is another sign to encourage us - to show us that we really have entered into the time period known as "the birthpangs of Mashiach."
_____________________
Note: * On the chart above indicates proposed ending date and duration.
Posted by Devorah Chayah at 2:17 PM

Not to put a kink in your very nice post (I wish), but perhaps one could look at it this way :-)

What does your month end date equal on our Jewish calendar = Bet Rosh HaShana.
Wasn't this the date of their "gigantic attack" on the communities closest to Gaza? Since many of the tunnels were destroyed, might they have something else up their 'launchers' in store for us?

birthpangs...
recently my daughter gave birth (baruch HaShem) and I was present during her birthpangs. As long as I was praying/saying tehillim, the birth progressed well. When I stopped, it stopped. My daughter later told me that when she lost focus on asking HaShem to help her, she lost control and fell into a panic; as long as she focused her cries to HaShem, everything proceeded calmly.

5775 is the year of geulah, anytime in that year... We're about to enter the most wonderful incredible year since the beginning of creation! Did you ever try to tell this to a chiloni or a goy ? I did. Most humans want somekind of geulah to happen, so tell them and maybe someone will make teshuva in your zchus.. Shana tova!

Elul and the Actual Redemption

Anonymous 11:29 pm, Rabbbi Nachman Kahane would agree with you. See Redemption by 2015?

Furthermore, I recently found one of the autistics messages that said in Feb 2008 that while he did not know if it would be weeks or months or years til the geulah, it definitely would not be past seven years, which also brings us to 5775.

Thank you for the post.
My view is that each ceasefire is equivalent to the respite of each plague in Egypt. We are now on the 7th plague!!!!

This post has been included in Shiloh Musings: Havel Havelim Not Shoftim, Judges.

I hope you'll visit, read the various posts and share, thanks.