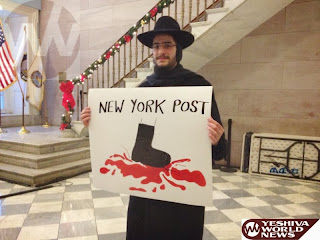 What's wrong with this picture? Do the American flag and the Xmas decorations jump out at you? Here is a Jew protesting the unfair and indecent treatment of a murdered Jew by a NY tabloid. Why does he expect fair and decent treatment among the goyim? Has history taught him nothing?

And what of the murder victim? Surely, you've all heard this story by now. Millionaire chasid, real estate developer, kidnapped and murdered and set ablaze in a dumpster and the despicable accusations brought by another Jew on the front page of the New York Post. It is difficult to imagine a worse chillul Hashem. (And how much more so, if any of the accusations are true.)

But, even this is a sign of redemption in its time. Mashiach coming, riding on a donkey, slow, ponderous and humiliating.