US Plan for MidEast Dominance Revealed in 2003 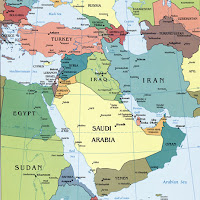 "What the United States Intends for Israel"

When I read that the noted co-author of the book The Secret War Against the Jews, John Loftus, was to give a lecture in Jerusalem, I immediately noted the date on my calendar as something I did not want to miss. My knowledge of Mr. Loftus' book and his recent article in Moment Magazine attesting to the injustice of Jonathan Pollard's sentencing and advocating for his immediate release for time served in prison led me to assume that he was a reliable friend of the Jews and so I eagerly anticipated what he might reveal in the course of a lecture entitled "America's Secret Plans for Israel: What the United States Intends for Israel and the Middle East Over the Next Two Years."

In my wildest imagination, I could not have conceived of what actually would be revealed at this lecture, but I'm almost certain it wasn't what was intended by Mr. Loftus. I was completely unprepared for what transpired and a growing sense of agitation, as I listened, interrupted my concentration, but I did make some notes so I could give it over accurately afterwards. First I will tell you what was said and then I will give you my interpretation of it. In the end, you will have to decide for yourself what to believe about it because before this is finished every Jew is going to be forced to take a position one way or the other.

Mr. Loftus was introduced as an Irish-American Catholic and his formidable credentials were enumerated. He presents himself as a friend and supporter of Jews and Israel and is an engaging speaker who gives an expert presentation of historical facts. As background to the lecture, Mr. Loftus explained how, in the course of his work, he happened to come into possession of classified information which indicated that former Nazis were alive and well in the US and working for the CIA. He related how he was able to bring this information into the light of public scrutiny and briefly, how it had set him on his career path.

Then, he began with a review of the methods employed by the "robber baron families" (.e., Harriman, Rockfeller, Walker, Thyssen, etc.) with the complicity of the Dulles Brothers to circumvent certain aspects of American law in order to forge financial alliances in Europe which eventually led to collusion with the Nazi regime. The details of this are well documented in Mr. Loftus' book, but the gist of it is that these men became powerful through fortunes which were amassed over Jewish blood. Most Jews are already well-informed about the connection between the Bush family and these "robber barons" and the role played by Henry Ford and the fact that his legacy continues to support and endow Arab terror against Jews to this day.

All very interesting, to be sure, but you may be wondering, as I did, what this has to do with America's plans for Israel in 2004-2006. After explaining what anyone who has read the book already knows, that the Bush family had ties to Nazi sympathizers in the past and to terrorist-supporting states in the present (i.e., Saudi Arabia), Mr. Loftus assured his rapt listeners that the current President Bush is a "good guy, a sincere man, and a real friend of Israel." He said that "good things" are going to happen for Israel in the near term and then he dropped his bombshell. Over the next two years, America is going to "take out all seven dictatorial regimes in the Middle East."

The conquest was begun with Iraq and is to be followed by Iran, the groundwork for which is already being laid and which, according to Mr. Loftus, will be finished "by Spring", only to be followed in swift succession by Libya, N. Korea (which will be divied up to China), Syria and Lebanon. Since Jordan and Egypt are already on America's payroll, that only leaves Saudi Arabia which will have no other option, according to Mr. Loftus, but to fall into line. The plan is ostensibly to "liberate" all the democracy-starved hordes of the Middle-East and rebuild all the war-torn countries courtesy of the American taxpayer (to whom Israel is also beholden, reminds Mr. Loftus, lest we Jews ever forget), and create a climate in which "moderate Islam" can flourish.

Then Mr. John Loftus, carefully and meticulously documented friend of the Jews, dropped his second bombshell. You know the "Road Map?" Well, according to him, "it's just a smoke screen to prevent a third front from opening up" and getting in the way of this grandiose scheme. And what does Washington want from Israel? According to Mr. Loftus, we are expected to behave pretty much as we did in Gulf War I. They want us to "sit back and let America take out all our enemies." The word "democracy" was repeated throughout the lecture almost like a mantra; as if it were a little god that we both worshipped. I could hardly contain myself. I was about ready to erupt and as I looked around me, the Jews were politely listening, laughing here and there as he joked good-naturedly.

Did you know we Jews are "not good at PR?" That's what Mr. Loftus says with a rueful smile. He says, regrettably, that "in American eyes, Oslo was necessary" despite the tragic loss of Jewish life. Our "biggest mistake," Mr. Loftus adjures, "was in not cultivating the US for help." We did not "make our case adequately to Congress."

He emphasized that no one anywhere in the world is a match for the US war machine and that all comers are left in the dust of American military might. When he proceeded to impress upon us the importance of the largesse so unselfishly bestowed upon us yearly by the predominately Gentile US taxpayers, I lost it and as a result, was asked to leave. So, what are we to make of this strange and unexpected revelation? I'll tell you what I think and then you be the judge.

Israel has no friend and no ally save her Father in Heaven.

Mr. Loftus' renowned book is replete with examples of how intricate plans were laid and then enacted over the course of generations. Is it inconceivable then to think that Mr. Loftus himself might have been set up over the past twenty-five or so years to be accepted as a trusted friend of Jews and Israel? But, for what purpose? For the same reason that we were once told that the gas chambers were really showers? And why come to Israel and expose this brilliant "plan?" Do his handlers want to gauge Jewish response? Jewish support? Jewish susceptibility? prospects for Jewish compliance?

Our sages have expounded upon the prophecies of the War of Gog/Magog. In the End of Days, a great power will invade Eretz Israel from the North. It will be accompanied by, among others, Iran and Libya. It will divide Jerusalem and rule over us for nine months before they are ultimately destroyed. Some months back, there was a joke going around that Gog/Magog actually stood for George (Bush, Jr) from George (Bush, Sr.) in Hebrew.

When one traces the beginnings of Oslo to the Madrid Conference which was held at America's behest; and when one recalls the signing of the Oslo accords on the White House lawn and the treachery of the Camp David Accords (both I & II) and Wye and the Quartet's "Road Map" (which Mr. Loftus assures us is only a "smokescreen" and this is also understood by Russia, the UN and the EU????), suddenly, it no longer sounds as outlandish as it once did.

I wondered at the time how an American invasion and take-over of Israel could involve countries as diametrically opposed to the West as Iran and Libya, but then that was before we were informed of the coming "regime-changes" by American forces. And how is it that America would invade from the north and not from the sea? Oh, but as Mr. Loftus has so carefully explained, Syria and Lebanon are the last stops on the democracy trail.

As Mr. Loftus made clear in his lecture, America does not intend to go head-to-head with Saudi Arabia, but only to bring it into line by breaking the choke-hold it has on America via its oil weapon. Once America controls all other oil reserves in the Middle East, Saudi Arabia will no longer be in the driver's seat of the oil market. So why bother with Israel at all after that? What threat are we to them? We don't have oil, we don't export terrorism. Why bother with Israel at all? [sarcasm on] We are, after all, a sister democracy. We share their Judaic-Christian heritage. [sarcasm off]

Not in the reality that we see today, but in the reality of Heaven; in the reality that will manifest in Israel's Heaven-mandated destiny during the period known as the End of Days and which is swiftly overtaking us, Israel will stand ALONE in opposition to everything America represents in the world---plurality, tolerance, glorification and deification of self, both self-gratification and self- aggrandizement, materialism, consumerism, exploitation, supreme arrogance and pride.

America, as the one world superpower, is the embodiment of Eisav/Edom/Rome while Israel, the chosen kingdom of priests, the holy nation, is the only obstacle to their ultimate, absolute rule over the planet---a rule in which G-d is subservient and not sovereign. They want every nation on earth to become a clone of America and today, many Israelis also want to be a little clone of America, but our prophets have assured us that Israel will come to her senses and realize the superiority of her Heavenly calling over the misperceived allures of materiality. America may try to impose her will by force, but the G-d of Israel has other plans.
_______________________________
RELATED NEWS:
New Centcom underground war room in Amman for US intervention in Syria
Posted by Devorah Chayah at 12:00 PM