Devash, Has Rabbi Melamed changed his mind? Would you know? Har Bracha residents: Christians out!  ...

Quoting from the article:

Settlers living on the western hill of the religious community of Har Bracha recently sent a letter to the community secretariat, protesting the housing of Evangelical Christians in their neighborhood.

According to the residents, the presence of the Christian volunteers – who arrived to work in the community's vineyards – violates the fabric of their society, and as a result – they hardly leave their houses.

"When we came to live in a religious community, we never imagined that one of these days we would be forced to live alongside people of a different religion, which doesn't match our faith and lifestyle," the residents wrote.

"We're not interested in associating with them, or alternatively – staying away from the public domain… We live in a small, intimate place, which is greatly affected by the composition of the population living here."

...The Christian volunteers are part of a large group of American volunteers affiliated with Yuval – a pro-Israel Evangelical organization. The group includes dozens of people, and their stay in Har Bracha was made possible after the community rabbi, Eliezer Melamed, met with them and ruled that they are not missionaries.

The rabbi's stand was recently published in detail in the Beit El Yeshiva website, under the title, "Respect and love for the lovers of Israel."

Ahavat chinam at its most damaging.  (The money doesn't hurt either.)

It's my understanding that the Jews were forced to leave that area, but I have no documentation of it.

I have not spoken to the rabbi, but I know that others have and that he refuses to listen to anything against the missionaries, only to say that they are not "missionaries" despite all the proof to the contrary. I know he has referred to them as "righteous gentiles."

If he's not saying the things the missionaries are reporting in his name then there is a serious disconnect between his words and the ears of those who are listening to him. One prominent missionary, who is training Christians to come to Israel and save the Jews, says in a recent newsletter:

Having noticed the unselfish and unwavering support year after year of the volunteer organization HaYovel led by Tommy and Sherri Waller from Nashville TN, Rabbi Eliezer Melamed has taken an initiative to establish a Christian Zionist Visitor Center on the Mount of Blessing in Samaria, in order to strengthen and encourage Christian support for the so called settlers.

Rabbi Melamed is Head of Yeshivat Har Bracha and is a prolific author on Jewish Law. He is well known in Israel and has a popular weekly column in the Beersheva [sic] newspaper called "Revivim." At the moment he is gathering other rabbis in Israel to get behind his historic initiative with a visitor center open for Christians on the Mount of Blessing.

We need to pray that Rabbi Melamed will succeed. Melamed has said that it is time for the Jewish people to act like Abraham, and open up the tent in order to receive those that have come to support them. He has gone even further and stated about HaYovel, “If we say no to these people, we will say no to the Messiah!”

Another, but related, question:

Does the fact that the missionaries perform avodah zarah in the vineyards and/or believe that the wine will one day be part of a central Christian religious ritual affect the kashrut of the fruit or the wine? 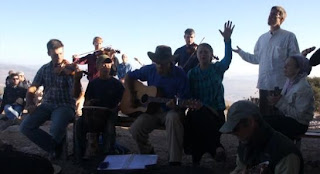 HaYovel Ministries has designated "worship leaders" to guarantee that "praise and worship" is ongoing continuously in the vineyards during the working period. (See a clip of one of their videos HERE where they explain it. Transcription below.)

Volunteer Nate Taylor: "A group of worship leaders who have taken different times throughout the day to make sure that there's continuous praise/worship and prayer throughout the vineyards. These vineyards belong to our Abba (God, the Father) in that our praise and worship is an important part of that cycle to recognize who Ha-Shem is. I believe it does motivate and encourage others, not only to work harder and faster, but they're not even thinking about that, they're thinking about how we praise Ha-Shem throughout the day, not only with our words and our lips, but with our actions."


But, they say "Ha-Shem."  How is that avodah zarah?  Glad you asked that question.  They've been coached to use our terminology, but they don't mean the same thing by it that we do. So, who are they speaking about when they say Ha-Shem?

Following are five examples taken from Messianic websites where they identify who they mean when they say Ha-Shem.

1) “The Name” in Hebrew is hashem [sic].
A Jew named Peter realized the truth about “the Name” and taught that “the Name” is Jesus; Nor is there salvation in any other, for there is no other name under heaven given among men by which we must be saved. Acts 4:12

2) Since Jesus is the Name (HaShem) above every name (Phil. 2:9-10) and HaShem means God it looks as if Paul is saying that Jesus is God.

4) ..the first century Jewish Christians did not refer to "Jesus" they called Him The Name, yeah! that would be HaShem.

Well, some Jews claim that this is still ok because these people no longer believe that Yeshu is G-d.  Oh, yeah?

This was written by one of HaYovel's main volunteers - Barrett Warren - on his blog in January of this year. (Keep in mind that Tommy Waller handpicks his volunteers to insure that they are "like-minded" believers.)

Some call me a Messianic Jew or a Hebrew Christian. Let's just say I'm a Torah observant Believer in Yeshua (Jesus).  ...I thought I'd address some of the Scriptures that I believe show that Yeshua is YHWH.  ...we have Yeshua claiming to be the I AM. That is He claimed to be YHWH who spoke to Moshe (Moses) in the burning bush.

Note that Christians (especially those of HaYovel) believe that Yeshu's second coming will culminate in a great wedding between him and his faithful believers (who are called The Bride of Christ). They take it all very literally when they say they are helping to produce the wine which will be served at the great wedding feast...

An affiliate of HaYovel encouraging their followers to volunteer writes:

I have drunk the wine from the hills of Samaria. That is the wine that, one day, the Messiah will drink at the great reunion in Jerusalem for all His Believers!! ...What if you were among the workers, who picked the grapes, of the winery from which the Messiah picks that big bottle of wine??!!

HaYovel writes in a newsletter:

At HaYovel we absolutely love weddings! .....and because we believe the vineyards have been and are being prophetically planted, pruned and harvested on the mountains of Israel specifically for the wine served at the great wedding feast in Jerusalem .....we feel it is important for us to do anything and everything we can to help. (Is 25:6-10, Rev 19:7-9, Mt 26:29)

These wedding preparation vineyards have, over the last 5 years, expanded exponentially in Samaria and Judea. It certainly looks like Abba is expecting a large gathering!

I've consulted a kashrut authority who is currently investigating.
Posted by Devorah Chayah at 9:46 AM