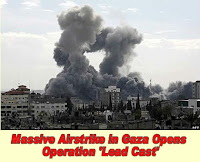 Global Anti-Israel Protests Expected on 'Cast Lead' Anniversary
(IsraelNN.com) The first anniversary of Israel's counterterrorism Operation Cast Lead in Gaza is set to be a catalyst for a series of anti-Israel protests worldwide. A mass march to the Erez Crossing between Gaza and Israel is to include several Western VIPs.

From December 27 through early January, the dates of Operation Cast Lead last year, international pro-Palestinian groups are set to hold "Gaza Freedom Marches" in North America, Europe and Israel. The Gaza Freedom March in Hamas-controlled Gaza itself is slated for December 31. Organizers of the latter event are expecting around 50,000 local participants, with over 1,000 from more than 40 countries, to converge on the Erez Crossing and demand it be opened to free movement by Palestinian Authority residents into Israel.

December 27th is the Fast of the Tenth of Tevet.
Posted by Devorah Chayah at 9:31 AM