What we need is Jewish Jihad 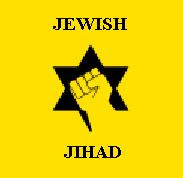 And it's coming, rest assured of that.

A dear commenter wrote: "What we need is a project where everyone is working towards a common goal, like chesed or tefila etc.


This is what is famously known as a galut mentality. That's all we had the power or the right to do in the Diaspora, but it doesn't apply in Eretz Yisrael.

Check out this quote from Rabbi Pinchas Winston's most recent article on Chanukah:

...Sometimes, even good people have to be shown the way. For example, the Chashmonaim had to be dragged into the crisis, because they had thought, as so many of us do as well, that it was the will of God that they hunker down and, in secret, keep Torah alive. Whenever possible, they sidestepped the open crisis taking place all around them in order to deal with the concealed one, learning Torah and keeping mitzvos in secrecy, until God saw fit to remove the Greek threat.

Well, they found out the hard way, Divine Providence saw fit to do so, but not the way the Chashmonaim had assumed, or had hoped it would happen. Like Ya’akov Avinu who was yanked from his tent of study into the wild and dangerous world of Eisav, Lavan, and Shechem, the Chashmonaim were drawn out from their secret caves and forced to wage a war against an army many times the size of theirs, and far better armed. It was a war against all odds and reason.
Posted by Devorah Chayah at 2:40 PM