Why Is "Christian Aliyah" Being Promoted Today? 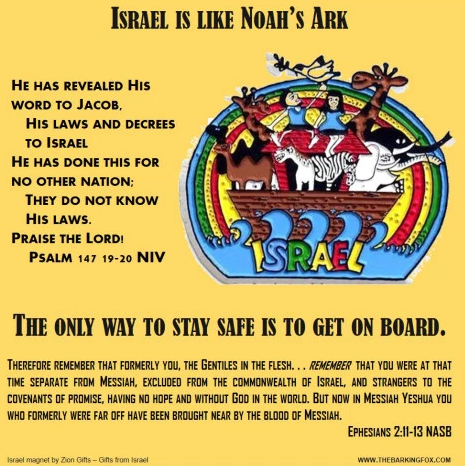 As Christian Zionism changes, attacks on Judaism are becoming more overt. The bulk of the shift in Christian Zionism is a result of the growing international dominance of charismatics who reject the concept of being raptured and stress the conversion of Jews to trigger the end times.

In their version of the end times drama, they do not watch idly from the grandstands of heaven after being raptured but remain on earth to fight evil and the anti-Christ themselves. It is Jesus who remains in heaven until the job is completed and a Christian Israel calls out for his return. This cleansing of the earth is done by the combined forces of charismatic or “spirit-filled” Christians and their Messianic partners, the term applied to Jews who convert but retain Jewish identity. The shorthand catchphrase for this distinctive end times narrative involving converted Jews is “one new man in Yeshua.”

Not surprisingly, the growing importance of converts in the end times narrative is encouraging a new wave of proselytizing to convert Jews to Christianity. As Hagee’s Jewish allies are quick to point out, he publicly opposes proselytizing, but much of his organization’s leadership and events are hosted by those who have embraced this “one new man” ideology and you can find it throughout Christian Zionist media. Hagee also publicly endorsed a Messianic ministry in Israel.

...By repenting of the Holocaust and allowing Messianics to retain their Jewish identity, these Christian Zionists teach that the stumbling blocks will be removed and Jews will convert in large numbers.

...Another stated goal of the Christian Zionist/Messianic partnership is to fight antisemitism. However while they are very anxious to defend Israel from an Islamic world they view as a common enemy, this conceals the fact that they are equally determined to save Israel from Judaism.

In "Your People Shall Be My People", Finto quotes convert Dan Juster as stating “Rabbinic Judaism is a more severe departure from biblical faith than I had ever realized in my early days of Jewish recovery… We who are Jewish are biblical New Covenant Jews, not Rabbinic Jews!”

...We already are seeing the onset of disillusionment with Jews who resist playing their assigned prophetic role. Believing themselves to be better Jews than the Jews, Christian Zionists step in to fill the role themselves. Like the British Israelites of the last century, today a group calling themselves Ephraimites believe themselves to be the true Israelites. But unlike the British Israelites, they are multiracial, including Whites, Blacks and Latinos, and even international.

Members of Israel’s Likud Party are working with these Ephraimites and other Christian Zionists through World Likud, headed by Danny Danon. Following a 2007 conference in Texas with Likud leaders, Joel Bell and friends launched a new organization called Worldwide Biblical Zionism (WBZ) to provide housing, legal assistance, employment aid, and military training to Christian Zionists who wish to make aliyah to Israel and the West Bank. [This role has now passed to HaYovel.]

Several leaders in Benjamin Netanyahu’s government participated in the inaugural WBZ event on November 16, 2008, including Gideon Sa’ar, current Minister of Education; Ayoob Kara, Deputy Minister of Development of the Negev and Galilee; and Yulie Edelstein, Minister of Information and Diaspora Affairs. Much of the outreach in the United States has been by Sagiv Assulin, the Knesset Leader of the Young.

One group reporting contact with Assulin is the Messianic Israel Alliance (MIA), whose name is misleading since the organization is comprised of Ephraimite Christians who believe they have a right to land in Israel. Before their 2008 national convention, they formed a “Provisional Israelite Council in Exile” and demanded their “inalienable right of return to their biblical inheritance and historical territory located in current Samaria and Judea.”

...It is not clear whether WBZ will succeed in bringing substantial numbers of Christians to the West Bank even as Christian Zionist funds continue to flow to the region; Ariel, described as the capital of “Samaria,” has a swimming pool named for CUFI director Billye Brim, located in the “John Hagee Building.” In fact, there are signs of a backlash within Likud against Christian Zionism that could interfere with the Ephraimites fulfilling their hopes. Moshe Feiglin is among the most right-wing of Likud politicians, but he recently disengaged from his partnership with Christian Zionists. He wrote in the Jewish Press,...

The preceding was an excerpt from an excellent expose written by Rachel Tabachnick in 2010. The WBZ has since been replaced with B'ney Yosef, Commonwealth of Israel (COI) and their practical arm - HaYovel. But, as you will recall from recent quotes, the Biblical Zionism terminology remains.

The reader may be wondering why they receive the backing of the government of Israel? It is because it serves a greater agenda...