[I know this is long, but please see it through to the end. Thank you.]

We are inundated here in Israel with missionaries and more and more seem to be coming out of the woodwork as we come closer to realizing our destiny. You never know when you might come across a few so, as a heads-up, I'll introduce you to a few with interesting stories. Be warned and warn others to keep far away from these people if you do see them. They really want a relationship, or even just a dialogue, with a Jew that they can brag about. 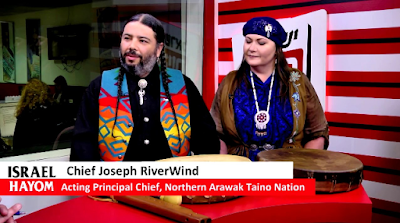 "The RiverWinds have been ordained ministers since 2007. Joseph holds a Master’s Degree in Biblical Studies and is currently working on a Masters in Biblical Archaeology. Laralyn is a Doctor of Naturopathy and a Master Herbalist. Joseph RiverWind is the Peace Chief (formerly the War Chief) of the Northern Arawak Tribal Nation. He is a honorably discharged U.S. Army veteran. Laralyn RiverWind has bloodlines from the Creek, Cherokee, Irish and Scottish tribes. She is the Ambassador for the Northern Arawak Tribal Nation. Both of the RiverWinds have Sephardic ancestry through their mothers."

Organization's Mission: "To share the unconditional love of the Heavenly Father; the Truth of Yeshua the Messiah, and the power of a Holy Spirit-filled life through Biblical discipleship, education and training. ...To develop and maintain good relations with our spiritual brother, the nation of Israel,...To reach out to other nations for cultural liaisons and spiritual missions [missionizing], bringing Truth, hope, joy and Love.

This was the first time I'd heard about the Shagririm Academy, so I looked it up.


"Learn How to Serve as an Ambassador to Israel - Apply today and be sent out by your local church or Christian organization to be a forerunner on this pilot Christian ‘birthright-like’ program." (Cost: $3,000 - $5,500)

No surprise here, it's run by a partnership of Christians and Jews - all Messianics in Israel - and it promotes Christianity as the Truth while at the same time encouraging and providing opportunities, not only to engage with and form relationships with Israelis, but to stay on in Israel and make "aliyah." All with government cooperation, Hashem yerachem!


"We are very excited to announce this pilot Ambassadors program that we believe will be the first of many future Shagririm Academies."

Highlights: During the Shagririm Program, each participating ambassador will not only learn about prophecies intended for the nations to fulfill, but will personally experience prophecies foretold by the prophets; as Jesus demonstrated and Apostle Paul exhorted. (Luke 24:44/ Rom 16:25 - 27)

Represent your nation, come to dance, sing and rejoice before God as David prophesied. What’s more, do it with Israelis in celebration of Israel’s 70th Birthday (May 14th).

Hear the sounds of joy and gladness of the Bride and Bridegroom that Jeremiah prophesied.

Play with the children in the streets of Jerusalem that Zechariah prophesied. We will do it on Jerusalem’s Birthday!

Comfort and practically serve as all the prophets prophesied. Interact with new Israelis and bring the prophetic scriptures to life.

Taste the wine that Amos prophesied about.

Serve in the Israeli Defense Force for a day as you don your IDF boots and uniform while learning how God still participates in Israel’s miraculous wars.

Discuss pressing political issues with members of the Knesset (Israeli Government) as they relate to God’s word.

Build friendships with Israelis you will continue to work together with back in your nation.

HERETICS, ENEMIES AND TRAITORS ARE SELLING OUR COUNTRY RIGHT OUT FROM UNDER US! HASHEM YERACHEM! WHEN ARE WE GOING TO UNDERSTAND THAT THIS IS A WAR?!

Thank you, Devash, for exposing these people. If there is any Sephardic blood in them, it must be screaming bloody murder about what they're doing!!! As it is, I don't believe it.

There is NO such thing as a man who can be G-d. Israeli Jews, do not be deceived even if our politicians are!!!!!

This Thursday May 10, at the OU Israel Center, 8:00 PM
"Should Your Filipino Be Going To Church On Sunday

English shiur given by Menachem Gottlieb with Torah source sheets, for men and women

For the event above I might have forgotten this part:

Thank you Dvora for raising an alert about those activities perpetrated in our land. Here is another one from Eser Agorot blog "Unbelievable! This is happening right now in Me'ah She'arim. Christian missionaries dressed as Haredim (often referred to as "ultra-orthodox") in the alleyways of Me'ah She'arim. Illegal posting of missionary posters on announcement boards in Me'ah She'arim." http://esseragaroth.blogspot.co.il/2018/05/christian-missionaries-invade-jerusalem.html?m=1

Besides claiming to be from the Lost Tribes, these Christians also like to claim Sephardic lineage, as in anusim. They will grasp at anything to lay a claim to our heritage.

Thanks so much for bringing it up here.

Thanks for the link! It's unbelievable isn't it?! That they'd go so far as to dress in disguise? I say unbelievable, but I know that's how they operate - everything by deception and they outright lie, too! That is something Jews simply do not get.