I'm aware how many times this alarm has been sounded, but each time the threat approaches us, we have to prepare even if it will delay again.  I know that, for myself, I let my extra provisions dwindle, so I'm certain others do as well.  The wake-up calls spur me into restocking and it's that time again.

I have to say that the situation looks different this time.

Israel vs. Hezbollah: IDF Prepares for War in Lebanon
The IDF has been preparing intensively for the past year for a war between Israel and Hezbollah. The army heavily publicized some of these efforts while keeping a low profile on other moves.
At times it seemed like Israel is holding a significant exercise almost every month. The ongoing drills are meant to test the full array of the IDF’s units, weapons and capabilities while simulating likely combat scenarios.
However, the constant action seems to serve another purpose: Lowering Hezbollah’s guard by regularly deploying troops near the Lebanon border and elsewhere. The group elevates its alert level for major IDF drills, but maintaining vigilance is harder over time. One day, it will no longer be an exercise.
A war between Israel and Hezbollah could erupt for several reasons. A deadly attack on IDF soldiers or civilians will provoke a strong Israeli response and may lead to a larger conflict. The army’s annual intelligence estimate warned that the Lebanese group is willing to take the risk and strike this year.
But there are other scenarios. As Israel increasingly adopts a preemptive war doctrine, the IDF may launch a surprise attack to neutralize Hezbollah’s key assets. Defense officials are alarmed by the group’s precision-missile program and moving closer to ordering a preventive strike to destroy the project.... (article continues)
Massive Israel drills launched to simulate major war offensive by Iran and proxies
Israel’s military and civilian authorities launched a large-scale war drill on Sunday, Oct. 31 to prepare for a pro-Iranian precision rocket blitz from Lebanon targeting civilians and infrastructure. The drill ending on Thursday covers multiple threats requiring evacuations of complete frontline communities, dispersing local Arab disturbances in mixed cities, cyber war and disruptions of basic amenities – or even chemical warfare.
The Air Force is meanwhile practicing operations for hitting 3,000 Hizballah targets across Lebanon in a single day in response to direct Iranian or Iran-supported missile attacks by Hizballah and imported Iraqi-Shiite militias. Estimates cite a potential 4,000 rockets a day, some of them ballistic and outfitted with high precision kits. Intelligence sources report that the 30,000-strong Iraqi Kata’ib Hezbollah has been assigned to send troops in Lebanon and they are in advanced training.
The missile strike Israel conducted on Saturday morning on Al-Dimas, a key point west of Damascus on the Syrian-Lebanon highway, was a typical pre-emptive measure to disrupt the passage of an Iran-Syrian arms convoy and Iraqi Shiite troops across the border into Lebanon.
On Wednesday, sirens will be heard to test a new alert system of 15 seconds instead of 30-second rocket warnings in sensitive northern districts. Hizballah is expected to launch its offensive with a drive to capture a number of Israeli locations along the Lebanese border. Since millions of civilians lack shelters able to withstand intensive rocket attacks, the drill will also focus on large-scale evacuations of entire communities within a 5-km radius from the Lebanese border to provisional centers away from the front for the duration of the crisis.
The IDF is therefore practicing rapid evacuations to save lives and prevent prisoners and hostages from falling into enemy hands. This will be a complex operation in more ways than one with hundreds of vehicles moving fast under fire. The drill will draw on lessons from the May Operation Guardian of the Walls against Hamas terrorists in the Gaza Strip. A plan then to evacuate civilian communities in the line of fire failed to take off since the public bus service is largely manned by Israeli Arab drivers who refused to take the wheel at the time.
Drawing on another lesson from the Gaza operation, the police are an active partner in the war drill, making ready to quell a repeat of the local disturbances staged by Arab protesters in mixed towns and their possible resort to live arms fire. The police have set up a helicopter squadron for moving forces at speed between trouble spots.
No official estimates have ever been released on the potential for casualties in this scenario being simulated this week, but hundreds of dead are not being ruled out. The hospitals co-opted to the drill will be on standby for a large influx of civilian and military casualties.
The drill led by the IDF Home Front Command and National Emergency Authority is also preparing for outages of power and water and breakdowns of food supplies as a result of rocket hits or cyberattacks disrupting traffic and hacking their systems. They are not ruling out the danger of chemical warfare like that practiced by Iran’s ally, Bashar Assad against the Syrian population which rose up against his rule. Mention has been made of a Hizballah plan to disarm Israeli civilians and troops by spreading a form of tranquillizer across large areas.... (article continues) 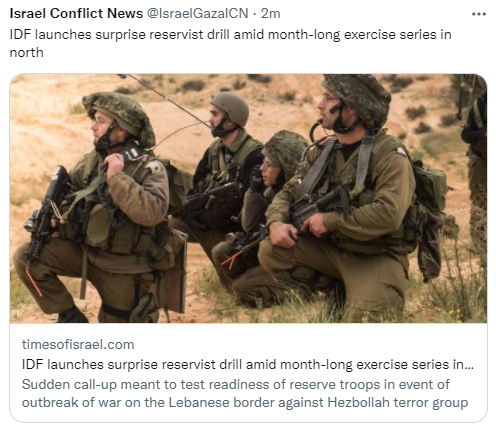 Think of this like you would if a hurricane or fierce winter storm were approaching.  Stock up on the things you might need if there is a power outage for a considerable time and keep in mind that water may not arrive to the tap if the power plant itself is not operating.  So, bottled water, ready-to-eat food, medicines, batteries (keep your phone charged though we don't know if cell towers will function).  Don't forget the kids and the pets.  It would likely be helpful to have some distractions (that don't require electricity) to occupy the kids.

For those who might have to travel to a shelter.  Probably best to have go-bags packed for each family member (back-packs for kids) with everything you'd need for 24-48 hours,
If anyone has any further helpful suggestions, please put them in the comments.  And PRAY!

Hashem, please bring our Mashiach and redeem us NOW!!
Posted by Devorah Chayah at 9:22 AM