Hellenism Today - Where Are Our Maccabees?

It's a week before Hanukkah.  Our thoughts naturally turn to the Greeks at this time of year - the Yavanim - and of course, the Jews who were enthralled with them, the Hellenists or Mityavanim.

Some see the Hanukkah story as ancient history, but to our sorrow, you can still read about it in its current iteration in today's news.

Historically, Rome took over from the Greeks, the Church took over from the Romans and through its Christian missionary efforts, took control of the entire Western world.  (Their book is often referred to as The Greek Testament because that is the language in which it was written.)

Today, Hellenism is alive and well and exists as Judeo-Christianity.  So-called Christian Zionism is the bridge over which today's Yavanim and Mityavanim cross back and forth. 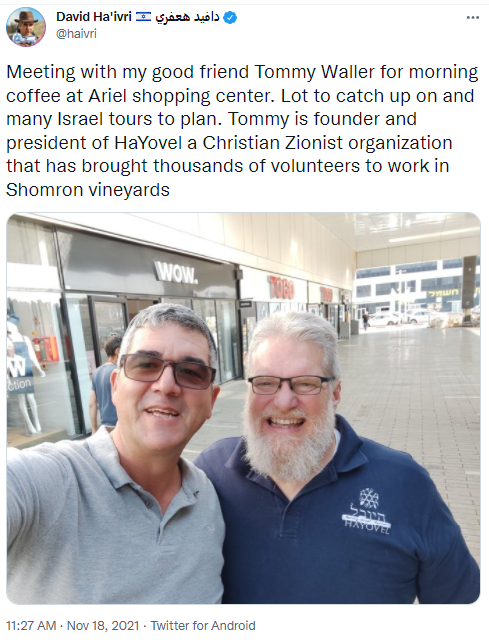 A YNET article posted today on their website showcases this very subject...

Change of government in Israel won't affect support of U.S. evangelicals
Analysis: Ties between Jewish state and Christian fundamentalists stretches back to 1980s; fifth annual Christian Media Summit in Jerusalem is another sign that despite trying to win over American Jewry, Israel is not giving up on evangelical Christian base

Within the article, I noticed an unfamiliar name...

“Evangelicals certainly had a unique relationship with the previous Israeli government. We knew figures in that government for decades. However, I am seeing this new government is continuing to recognize the role that our community plays around the world. It may be different, but I don’t see any de-emphasis. I think the new leaders, to the shock of some of their constituents, have openly and publicly engaged with us,” the Rev. Johnnie Moore, an American evangelical leader and president of the Congress of Christian Leaders said.

Who is this Johnnie Moore? My researcher was back with the answer before I could even ask...

Johnnie Moore Bio
Rev. Johnnie Moore, 37, has been called one of America's most influential evangelical leaders and he is especially known for his multi-faith work at the intersection of faith and foreign policy. He is the author of seven books including Defying ISIS: Preserving Christianity in the Place of Its Birth and (along with Rabbi Abraham Cooper) The Next Jihad: Stop the Christian Genocide in Africa.
Moore is also a business person who founded one of America's leading, boutique public relations and communications consultancies, The KAIROS* Company. He is currently serving his second (and final) term as a Commissioner for the United States Commission on International Religious Freedom appointed by the President of the United States.
In January 2018, Rev. Moore was deemed a "wunderkind" and an "evangelical gatekeeper" by the Washington Post in a major feature which said that "Moore's gift is being able to speak to different types of people, to exude warmth and collaborative energy during one of the most divisive periods in modern America."
Newsmax Magazine has named him one of the "ten most influential religious leaders in America" (2020) and previously as "one of the twenty-five most influential evangelical leaders in America" (2017). In 2017 The Christian Post called him one of the "seven leaders to have the most impact," and in 2017 he became the first evangelical ever invited to deliver a sermon at the Cathedral of St. Matthew in Washington, D.C. in view of the nuncio of Pope Francis to the United States and patriarchs of the catholic and orthodox churches of Syria, Iraq and Lebanon.
Also in 2017, he became the youngest recipient ever of the prestigious "medal of valor" by the Simon Wiesenthal Center, a leading Jewish human rights organization, at their annual Tribute Dinner, a star-studded affair in Beverly Hills chaired by more than two dozen leading lights of Hollywood. On the same evening the late Israeli icon Simon Peres was a posthumous recipient of the same honor.
Rev. Moore's groundbreaking work on behalf of religious freedom in the middle east has received wide reaching acclaim.
He was involved in the drafting of King Hamad bin Isa Al-Khalifa of Bahrain's landmark Bahrain Declaration on Religious Freedom and Peaceful Coexistence in the Middle East. One month later, he helped lead the first ever evangelical delegation to meet with Egyptian President Abdel Fattah el-Sisi; on the same trip the delegation met with the present and previous Grand Muftis. In order to promote religious freedom, and as an advocate for religious minorities, he has held similar meetings with heads of state throughout the Islamic world including with the Crown Prince of the United Arab Emirates in 2018, twice with the President of Azerbaijan, and twice with the Crown Prince of the Kingdom of Saudi Arabia in 2019 and 2018. In September 2018, Christianity Today Magazine noted that Moore was the most high profile evangelical ever invited to visit the Kingdom of Saudi Arabia as a religious leader. Moore is a noted evangelical friend of the State of Israel and has met Israeli Prime Minister Benjamin Netanyahu as well as with various Palestinian government and civil society leaders. In 2020, Moore was credited with playing a significant role in the once-in-a-generation peace deal negotiated between the United Arab Emirates and the State of Israel.
In 2019, he met with interim, transitional Prime Minister of the Sudan. He has met with ministers of Islamic Affairs, Justice and Education throughout the Islamic world to promote religious freedom and as an advocate for persecuted Christians and Jews. In September 2019 he collaborated with Muhammad Alissa of the Muslim World League to issue a joint statement calling for cooperation between Evangelicals and Muslims in order to protect places of worship around the world. He also worked with Indonesia's Nahdlatul Ulama leaders Mustofa Bisri and Yahya Staquf to issue the Nusantara Statement which acknowledges the "equal rights and dignity of all people" and condemns the political weaponization of Islam by Muslims or non-Muslim, alike.
Moore appears regularly in the national media and has written for many national news publications including CNN, the Religion News Service, The Washington Post, and Fox News. He serves on the executive committee of the board of the National Association of Evangelicals as well as a board member of the World Help, and My Faith Votes. He is on the faith advisory council for In Defense of Christians and also for the National Museum of American Religion. He served as an international spokesperson for the Museum of the Bible in Washington DC during its grand opening in 2017.  (It goes on and on here.)

If you are like me, you are wondering how it is that a 37 yr-old in our day and age has reached such pinnacles of power and accomplishment in such a short time.  I wondered, where is he from and who are his parents, but oddly, like Klaus Schwab, his official bio is lacking in details of his early years.  You have to wonder why.  Obviously, this is another case of someone chosen, groomed and recruited for big things by TPTB, but that's another subject.

It just goes to show you how deeply embedded this is in our own daily lives without our even being aware of it.  But, the most important take-away for us is we should know and understand that this is the current form of ancient Hellenism; it is part of the war against HKB"H; and, it is meant to remove Torah Judaism and Torah-faithful Jews from the world through complete assimilation.