Ever since the campaign to vaccinate children ages 5-11 began about a week ago, reports are saying that infections are once again on the rise and that this age group is being targeted by the virus now.

How interesting that each time the mRNA gene therapy becomes available to a new age group, they are the very ones most susceptible to infection.  Either this is a magic virus which infects the population in descending age brackets or the mRNA gene therapies are producing the surge in infections.

There is no doubt in my mind that the original coronavirus that causes COVID-19 was created in a lab and was maliciously and criminally released as a bio-weapon.  I don't think the so-called variants and mutations are naturally occurring, although I know there are experts claiming that the gene therapy is driving the mutations.  I think they are experimental releases of virus manipulations.  From the looks of today's headlines, you would think we were starting all over from the beginning of 2020 when the magic virus first appeared. 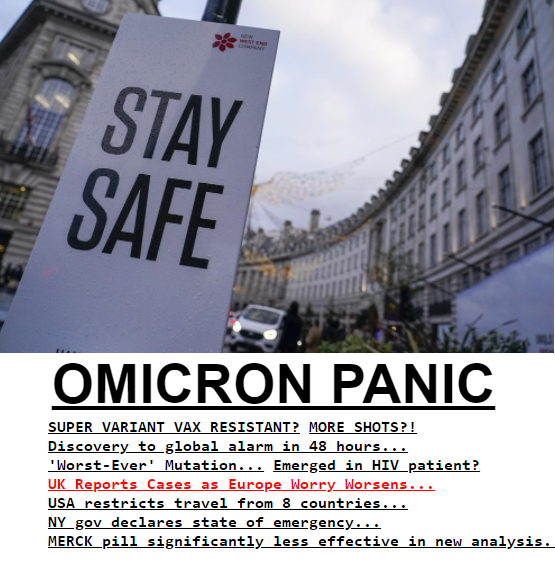 However, this was predicted by a release of information from a source within the Canadian government in October 2020.  It seems their timeline is a bit off, but all seems to still be going according to plan. 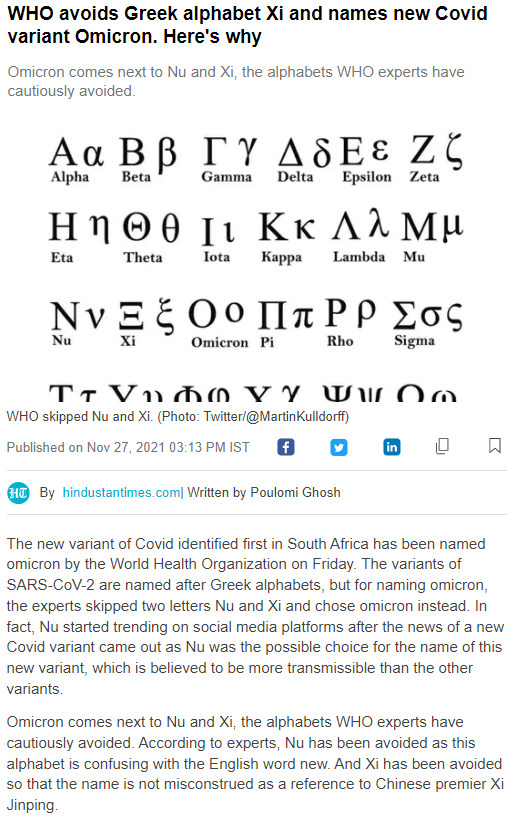 According to the article from the Hindustan Times, omicron is the fifteenth letter of the Greek alphabet.  It so happens that samech is the corresponding letter in the Hebrew aleph-bet...

Story
Yaakov had been terribly ill for weeks. He finally decided to ask R. Mordechai of Neshchiz for advice. “Rebbe,” he sobbed, “please help me. I am extremely sick. I have gone to every doctor in town, but none of them has a cure for me.”
“It seems that you haven’t gone to the right doctor,” replied R. Mordechai. “Go immediately to Anipoli and talk to the specialist there. Then you will be cured.”
Yaakov thanked the Rebbe for his advice, hired a wagon, and set out for Anipoli. When he arrived there, he rushed over to the first person he saw and asked, “Please, tell me where the great specialist lives. I am very ill and must see him right away.”
The person was puzzled. “You came to Anipoli for a specialist?! This is such a small village, we don’t even have a doctor here.”
“You must be mistaken,” Yaakov insisted. “R. Mordechai of Neshchiz explicitly told me to go to Anipoli and see the specialist here. You must tell me—where does he live?”
“But there is no doctor here,” the man repeated.
Yaakov went to everyone in town, asking each the same question: “Where is the specialist? I must see the specialist right away.” And everyone gave him the same answer: “There is no specialist in Anipoli. There is not even a doctor.”
Disappointed and frustrated, Yaakov returned to R. Mordechai of Neshchiz. “Rebbe,” he said, “I don’t understand. You sent me to Anipoli, but the people told me that not only is there no specialist there, there is not even a doctor.”
“Hmm. They don’t even have a doctor?” questioned the Rebbe. “So did you ask the people what they do when someone is sick?”
“I did,” Yaakov replied. “They told me that when someone is sick, they pray to G‑d and rely on Him to cure them.”
“Now do you understand?” R. Mordechai explained. “The people in Anipoli go to the greatest specialist in the world. They pray to G‑d. He is the one Who cures us all.”
Design
The design of the samech is a closed circle. A circle represents infinity, because it has no beginning or end. In Kabbalah the samech represents the infinite power of the Ein Sof, G‑d’s infinite light.
Gematria
The numerical value of the samech, the fifteenth letter of the alef-beis, is sixty. In the Priestly Blessing recited every morning there are fifteen words and sixty letters. When the kohen blesses the people, he must put his two hands together. According to the Mishnah there are thirty bones in each hand, sixty when the hands are joined.
What is unique about the Priestly Blessing? The results of such blessings are swift and without interruption, similar to the strength of a current of mighty water that no dam can stop. The Priestly Blessings embody the concept of the samech: infinite light and power.
Meaning
The word samech means “to support,” as it states in the Shemoneh Esreh: “Someich noflim—You support those who fall.” It is not by chance that the samech follows the nun in the alef-beis. As mentioned earlier, the nun is one who has fallen, and as such, needs the samech to be supported or lifted up. On the other side of the nun is the mem, which also bolsters it. But the samech is greater than the mem. Every day we say in the morning blessings that G‑d is Someich noflim—He supports those who fall. We also say that He is Zokeif kefufim (with the mem appearing at the end of the phrase)—He straightens those who are bent. While the mem signifies the straightening of one who is bent, the samech can bear the weight of those who have entirely fallen.
The first two letters of the word samech are סמ—samech-mem. Together they spell the word sam, which means a potion or medicine. This is not only relevant with regard to one’s physical health but also one’s spiritual health. The word samech סמך is an acronym for: salach סלח,to forgive; mechal מחל,to pardon; and kaper כפר, to atone. When one takes strides to forgive, pardon and atone, one achieves a great spiritual healing.
It is also said that the samech and the mem represent two distinct eras. The closed mem represents Gan Eden, Paradise (which is concealed from the human eye), the world of souls which currently exists in another dimension. The samech (which is greater than the mem) represents the era of Techiyas HaMeisim, the Resurrection of the Dead. This is the ultimate manifestation of Mashiach’s coming, when all the souls of the departed will return to bodily form and reside on earth for all time.
In the World to Come, the ring of the samech becomes even greater than its original function of supporting the fallen. For then it will radiate the infinite, transcendent healing which will last for eternity. (Source)

Posted by Devorah Chayah at 7:52 PM