Why Are They Suddenly Calling It a "Stampede"?

I'll tell you why the media is suddenly calling the Meron tragedy a "stampede."  They are pushing a new narrative that is meant to shift all the blame to the victims.

Yeshiva World News:  List Of Niftarim R”L Killed In Meron Stampede Released
Ynet News: 10 boys and teens among the dead in Israel festival stampede
Jerusalem Post: Mount Meron tragedy: These are the victims of the stampede
Israel HaYom: Israel grieves for Lag B'Omer stampede victims
Various YouTube video titles...
Why did the stampede on Israel's Mt. Meron happen?
While it Happened: Crowd Fleeing Chaotically in Deadly Stampede in Meron
Israel stampede: 45 killed, over 100 injured in stampede at Mount Meron
Israel: "People were completely crushed" - emergency worker on deadly Meron stampede
The list goes on and on. I did not come to the end of it.  The second video title captures the mental image that accompanies the word "stampede" - "crowd fleeing chaotically."  That is certainly not what was being reported from the scene in the initial aftermath.  Unusually, the Times of Israel seems to have taken a more truthful turn and offered a more accurate description in its headline.

A "crush" more accurately reflects the facts coming out initially from those who were there and is actually just the opposite of a "stampede."  This picture shows the actual place where the "crush" occurred... 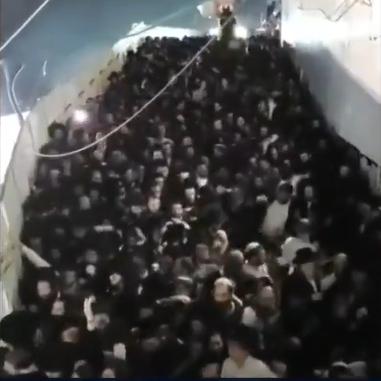 You can see how people are hemmed in on both sides and constrained by those in front of and behind them.  Initially, it was being reported that this flow of people was managing, albeit with difficulty, to keep moving forward but at the end of the passageway, police had barricades creating a bottleneck and that they inexplicably stopped the line exiting.  The momentum from behind could not be stopped and those sandwiched in between were being squeezed tighter and tighter until, left with no more room to stand upright, some began to be pushed over onto others and pile up.
There were immediate complaints about the police and just as immediately, attempts began to deflect those accusations.  This endless repeating of "stampede" today is surely part of a major effort to counteract the early reports.  Clearly, any "stampede" was impossible and there are no videos of people running wildly and chaotically, trampling others underfoot.
Nobody heard of a "stampede" until now.

Interestingly, the police at this scene were at the same time hosting a delegation of Ukrainian police led by their top cop.  They were reportedly going to demonstrate how they handle crowds of religious Jews as an instruction for how the Ukrainians might improve their handling of the Uman crowds.

I have to say further, that I am sickened to the core of my being by the blatant attempts to collect political capital off the tragedy before the dead were even buried.

HASHEM YERACHEM!!  The following was uploaded to Twitter on Friday.  It was not accompanied by any explanation so I don't know if it had any connection to Meron, but the police attitude toward Chareidim is very evident in their actions.

It's definitely inside Rashbi's tomb in Meron.

There are so many lies being told about what really happened on L'aG B'Omer.

Why were the Border Police manhandling these young men? There were clearly no big crowds of people, they weren't doing anything 'wrong'.

BH, I pray all the truth is finally going to come out about what is really happening in Israel.

Me too, Rivka, me too. Thanks for identifying it for us.

How Exactly Did The Terrible Disaster At Meron Occur?

Not just blame the victim, but blame anyone who holds to an authority higher than the State, ie. haredim and many, but not all, settlers.

The State of Israel: G-D's Hand or Satan's? Finally, a Guide for the Perplexed R. Yehudah Richter P1
https://youtu.be/cuIlp0UlJgk

You are so right, Yakov. See HERE. And compare to HERE.

See Yitzchak Deri's eye-witness testimony against the police at Meron.

Never underestimate the evil of the Erev Rav.
They had a full two years to plan this.
Only a naif would think they wouldn't use it.
May they all receive their proper due --
Dean Maughvet

The disaster in Meron video is horrific 45 Dead,30April2021
The Police caused "Stampede" was like shouting Fire in a crowded Theater with all the exits locked and guarded by the Police. This was a Police Pogrom against the Haredim. The "Whitewashing", intimidation and the destruction of evidence has started already. Videos have been posted of what has happened YouTube will take them down, https://www.brighteon.com/2cb31a11-9bc9-4098-ad79-97616a73d3ef

How ironic, they invite the Ukrainians to teach them how to handle religious Jews. The Ukrainians were more brutal than the Nazis. We seem to forget, or prefer to forget these facts.

Doesn't it appear strange that of all places, Israel, chooses to deal with, befriend and ally themselves with so many of those who murdered by the millions our people, not only from the last hundred years or so but even going back to the horrific massacre where they murdered about 600,000 Jews (unkraine) in the 1600's. That is why it's clear that the founders must have made a deal (all connected to the UN, etc.) with the nations to create the modern 'state'. They knew from the start their goal would be to slowly erase Judaism from the Jews, c'v. It will never happen! because we are Hashem's children and the world was created for Torah & the Yehudim! May we, the Bnai Yisrael, increase to all be knowledgable in Torah as in the days of Chizkiyahu Hamelech!