Menachem: The First Message About Nibiru

As translated from the insert on Binyamin's message:

We're bringing here excerpts from a previous communication with Menachem from 11 Tevet that wasn't publicized and within which was the first reference in the messages to the matter of the star called Planet X - Comet that is expected to pass by our planet in the coming months within which it will bring about tremendous damage on the surface of most of the planet - the seas and dry land - and drastic changes in the lives of all the world's inhabitants including influence on the rotational inertia of the planet and so writes Menachem...

In the early 1970s there was an article that appeared in a scientific newspaper which told about the discovery of a new star which got the nickname 'Nibiru'. And this star, there are those who claim that it is five times larger then our planet and there are those who say it's small like the moon, anyway we're talking about a comet which has many more 'stars' around and behind it.

When they discovered it in the early 1970s, they said that it was really coming in the direction of our planet, but it wouldn't hit us. According to their calculations, the distance when it passes by us will be something like the distance from here to the moon, but since it is coming at a very great speed, and it's dragging with it all kinds of things, what is known as a 'tail of meteors', so without a shadow of a doubt its effect will reach us. It's not simple. It's very scary. But, already in the 1970s they wrote that even before it reaches us - slowly-slowly all the weather on the planet, and everything happening in our world, everything will begin to change. There'll be a lot more earthquakes, and a lot more volcanic eruptions, and a lot more different types of storms. As you may recall, we had in the United States a series of one hundred tornadoes at the same time which was something fierce. There will be different kinds of changes in the weather and etc., and it will get stronger and stronger until this star reaches us. And the moment that it reaches us, it will cause waves of really gigantic dimensions in the sea which will spill upon the surface of the planet, upon all kinds of places, and more different types of mighty effects.

As you'll remember, we told you there exists an American Navy map in the US describing how the East Coast of the United States will disappear together with the City of New York and etc., Florida completely cut off, and in Texas also the coast along the Gulf of Mexico, and in general, in all the area of the Mississippi River that's alongside Louisiana will be a lot wider from Canada and a lot more spread out when it gets closer to the Gulf of Mexico, so this state, the majority or at least a lot of the state already won't exist at all! And on the West Coast - so, in general California will become much narrower and there won't be a beach at all in the states of Oregon and Washington, in short a big scare, and not for no reason. 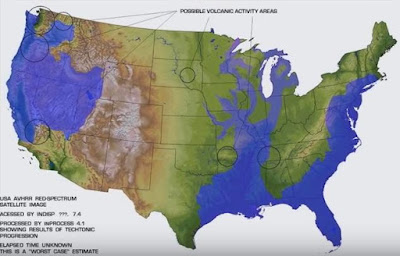 We don't know exactly how it will be - but it's written about in a very important scientific source.

They're following this thing, but not reporting on it. They went silent on the subject, they didn't speak of it further, only preparing, they started digging, to make bunkers. It's a fact. And now there are bunkers also in Israel, there's one very large bunker for the "important people" of the state, who will leave the rest of us outside - and they'll be inside. I'll tell you a secret: if it will be this way - then woe to those who are inside... and the people who are outside, those who have trust in Hashem - they'll be saved. And another interesting thing I'll tell you, that they made calculations and measurements, and where is the most, most safe place in the world with regard to this whole event?... They reached the conclusion that it's Jerusalem, "the safest place is Eretz Yisrael - and mainly Jerusalem".

The evildoers will close themselves inside within their bunkers. In the United States they've aleady moved. They brought the Navy inward towards inside the US in order that they won't be on the coasts. But, they don't have any intention of informing the people, the population, about the enormous danger posed to them. It may be that the Navy, etc., will succeed in surviving it, but it's precisely the ideal opportunity, the best from their perspective, to eliminate 9/10s of the population of the world, shelo neda. Most people will go into a panic, will begin to run, and to buy, will begin to argue and to kill each other. It will be a big mess. They'll bring the military to contain them this way, and there will be violence, not for no reason. They will quietly enter into their hiding place, close the door and 'that's the end of it'. And also with us they have such a place, also here they will close on us and leave us outside, but HKB"H, He who is sending this star, will save Am Yisrael and with all this it's possible in the clearest way to see the truth, it's the single solution that can be the real explanation, that allows us the possibility to understand everything that is happening here. It appears in the Heavenly firmament like it's double. They're seeing it at the North Pole very clearly at night. Already today you can look at the sky and see like two stars, one is a moon which is located next to this star.

If it's already possible to see it, that says that it's very close! They already measured the speed and all the data, etc., and it's not for no reason that the Catholics bought this mountain in Colorado, a high mountain, they put there an observatory with the very biggest telescope, the most advanced that there is in the world. They're conducting observations there. And who is their partner? Who's sharing this project with them? ...NASA, the American space agency, those who send the satellites, etc... Is it interesting what NASA has together with the Catholic Church?... Funny. Most peculiar. But it thoroughly works out the puzzle. How now all the pieces fit one inside the other in a complete way.
Posted by Devorah Chayah at 2:12 PM

On a parallel note, there's a commentary (the Abarbanel)on the part of Zecharia which talks about the Har Habbayis splitting. He says the mountains are actually Eisav vs Yishmoel who face each other in battle. He learns that the 'splitting" of the mountains in the The prophecy, is each side carving roads etc in preparation for battle.
The Truth

Does frankenstorm connect to nibiru?
Jack

On the Sumerian origins of the name "Nibiru": https://en.wikipedia.org/wiki/Nibiru_%28Babylonian_astronomy%29

What are your thoughts on any forecasts of its arrival? Are there any sources which come close to one another? Any which are backed up by math?

Actually, it's not Har Habayit. It's Har Hazeitim.

You mean like Super Storm Sandy? When was there ever anything called a super-storm until the last few years? Yes, freakish weather, super storms, increased volcanic and seismic activity are all a result of the approach of this heavenly body.

All I've heard is Purim to Pesach time. Real accurate sources get scrubbed as fast as they appear, so who knows? IF the autistic kids are getting their information from Shamayim, I guess that's as accurate as we can get. They say they don't know a date, but they appear to be expecting next few weeks.

Thanks. I'll try to do some research via some of the "alternative" news sources I sometimes follow.

With all due respect I can't buy into this story. It's as if people are trying knowingly or unknowingly to conjur up fear and interest. Something about it doesn't ring true. Maybe I'm wrong. What I do know is this, despite all the months tha have passed and prediction after prediction has not brought an end to our troubles, I believe with in the coming of the mashiach. No matter how long he takes, I await his coming.
Nibiru Is Not Real

Google Niburu 2016 and it says March on most sites. Some say it is behind Mercury, others say it is behind the Sun. We have strange sounds right now in my country, it is a little hype even - famous Shofar sounds? - Increased solar activity is now the scientific explanation. That could fit into some other (prophetic) storylines though(?) https://www.youtube.com/watch?v=l0N4UADJkRs

Shavua tov to Devash and all the readers. So the big question is now the timing. According to what the autistics said it seems to be very short. I found this blog page while trying to get additional information. True not true , until it will be clearly visible to all anybody couldn't be certain about the truth about this affair, except the total confidence in the accuracy of the autistics messages. If it is true, as we can read in this blog, it might be the biggest covering up in human history. Here is a link with a lot of information and links. Up to everyone to judge about the value.
http://brussellsprout.blogspot.co.il/2013/11/gigantic-wrecking-ball-headed-toward.html?m=1
Good news very soon for Am Israel, and G-od bless our estimated sentinel, Devash.
Itzhak. Yerushalaim.

Is this the "Global Warming" Summit (code words) that was recently held?? I have always had my own ideas about what this really means. This scenario fits very well. ~ M.L.