Usually, when we refer to the "theater of war"  it is a reference to "the entire land, sea, and air area that is or may become involved directly in war operations."
In our circumstances, I am referring to the literal theater, i.e. the media.  Today's "theater of war" has become the television, live-streams on the computer or smart phone, and all forms of social media.  And theater it is - everyone is playing his assigned part... 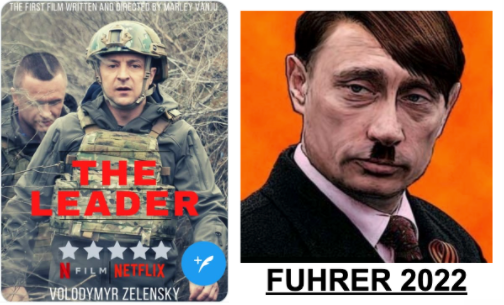 We know this is a 'Great Western' production because you have 'pure goodness' and 'pure evil' faced off against each other.  Woe to anyone who chooses the wrong side!  In truth, however, these two are cut from the same cloth and one of them was literally an actor playing this part before he was elected to office!
People will die and infrastructure will be destroyed.  Refugees will be uprooted and businesses will flounder and fail, but the main characters are all on the same side and they will win either way.  Or so they imagine.
This looks to me like the next phase of the globalists' plan for world domination.  I am beginning to think that the plandemic was just to soften us up.  WW3, if this really is it, will likely be the instrument for the Great Reset - economic enslavement and yet millions more people dead.   Remember, war is big business (and so was the plandemic) and it also brings about global societal changes in record time.  The same group instigated WW1 and WW2.  The fact that it is planned and coordinated by an overlord cabal does not make it any less real to the people at the bottom of the food chain - the cannon fodder.
We can't possibly determine from what we see in the media coverage what the true situation is, so the only thing that really should matter to Hashem's children is that this is the major indicator of the nearness of Mashiach and the Geulah Shlaimah.  Mashiach is the only one who can defeat the Globalists and at the end of this war - if it really does turn into WW3 (and why shouldn't it, it's clearly part of the plan after all) - there WILL be a whole New World Order, but a world of righteousness without any evil at all.
The Guy's an Actor, He's Reading a Script!
Posted by Devorah Chayah at 11:06 AM