Is Gas Really at the Heart of Everything?

Some readers are new to the blog and long-time readers may have forgotten, so I am going to bring forward some information that I published a few years ago.

In a nutshell, it explains how the situation of natural gas supply between Russia and the EU brought about the war in Syria.  Russia has had a monopoly on the supply of natural gas to the EU countries and could basically charge whatever the market would bear and also use supply disruption as a threat if the need should arise.

DIRECTORATE GENERAL FOR INTERNAL POLICIES
POLICY DEPARTMENT A: ECONOMIC AND SCIENTIFIC POLICIES
INDUSTRY, RESEARCH AND ENERGY
An Assessment of the Gas and Oil Pipelines in Europe

From Section 6.2 Russia as a Supplier, Experiences and Risks on Supply and Transit Routes
"The European Union as the major consumer and Russia as the major supplier are extremely interdependent in terms of their energy policies. ...The transportation infrastructure, including oil and gas pipelines, plays a vital role in this relationship of interdependence.
The existing and projected routes are, however, subject to a great deal of political and economic power play, which potentially undermines or endangers their efficiency.
Along with the Russian-Ukrainian dispute during the winter months of 2006 and 2008, the EU is becoming increasingly worried about the stability of oil and gas exports from Russia. There has been a growing concern that Russia is becoming an unreliable supplier or is using its dominant position to promote its political aims. As a reaction, the EU has begun to eagerly promote the need for energy diversification aiming to improve the overall energy security level within the EU borders."

The EU wanted to end that monopoly and other markets were eager to sign on, including US-backed interests.  Syria became the nexus for plans to add additional pipelines to Europe. 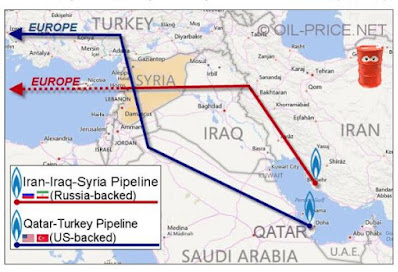 The West instigated the "civil war" in Syria in order to topple Assad, who was firmly on Russia's side, and put in power someone more amenable to allowing a US-backed pipeline to run through Syria.  But Assad invited in the Russian military to help keep him in power...until today!

Is the fight over a gas pipeline fueling the world’s bloodiest conflict? (2015)
"Major Rob Taylor, an instructor at the US Army’s Command and General Staff College wrote in the Armed Forces Journal last year [2014] that the rival pipelines could be influencing the conflict in Syria.
“Viewed through a geopolitical and economic lens, the conflict in Syria is not a civil war, but the result of larger international players positioning themselves on the geopolitical chessboard in preparation for the opening of the pipeline,” he noted.

For further consideration, see this November 13, 2021 article,  Putin Recalls How Ukraine Cut Off Gas Supplies to EU in 2008 Over Price Row; and, this article from March 26, 2018, Can The U.S. Break Russia’s Gas Monopoly In Europe?, in which it says...

In a statement that is sure to provoke Russian backlash, while also sending a strong message to both Moscow and European energy markets, Department of Energy (DOE) Secretary Rick Perry said on Thursday before the Senate Armed Services committee that moving U.S. energy supplies into Eastern Europe is one of the more powerful ways to contain Russian influence.

Is maintaining this gas monopoly still the major driving force behind Russia's military decisions?  The question makes Germany's reaction to the current Russian adventure in Ukraine more than a bit interesting.

Ukraine crisis: Germany halts pipeline as nations sanction Russia
Germany has put a stop to a key Russian gas pipeline following Vladimir Putin's orders to send troops into Ukraine.
On Monday the Russian president recognised two breakaway Ukrainian regions as independent states and ordered Russian troops to deploy to both.
Western nations largely see the action as a pretext for a wider invasion.
In response, Germany halted approval of the Nord Stream 2 pipeline and other Western nations issued sanctions.
Sanctions can take various forms - the term can refer to many actions used by one country to harm another, usually to deter aggressive actions or breaches of international law.
The Nord Stream 2 pipeline has been supported by Germany despite opposition from countries such as the US, UK, Poland and Ukraine. It cost €10bn (£8.4bn), with the funding split between Russian and Western energy companies.
But following Mr Putin's order to send troops to the rebel-held Ukrainian regions of Donetsk and Luhansk, Germany announced it was suspending the process of giving the pipeline between it and Russia an operating licence - effectively stopping the project until further notice.

Nord Stream 2: How does the pipeline fit into the Ukraine-Russia crisis?
The US and UK, along with Russia's neighbours Poland and Ukraine, strongly oppose Nord Stream 2.
They fear that if were to start operating, it would give Russia even more of a stranglehold over gas supplies to Europe.
Ukrainian president Volodymyr Zelensky has called Nord Stream 2 "a dangerous political weapon".
UK Prime Minister Boris Johnson said Europe needs to "snip the drip feed into our bloodstream from Nord Stream".
...Russia is keen to boost supplies of gas to Europe from its vast fields in the west of the country.
It wants an undersea pipeline to Europe, rather than relying on its land-based pipelines which go through Poland and Ukraine. These pipeline networks are aging and inefficient. Besides this, Poland and Ukraine charge high transit fees. [Which they will lose if the undersea pipeline goes live.]
Before the Ukraine crisis, Mr. Scholz's predecessor Angela Merkel did a lot to try and push through Nord Stream 2.
Germany already imports 35% of the gas it needs from Russia and she thought Nord Stream 2 would be a way of getting much more Russian gas delivered directly to Germany.

If this gas supply issue between the EU and Russia really is at the heart of everything, that means that territorial expansion isn't and that means that this conflict could very easily break out somewhere else beyond Ukraine. 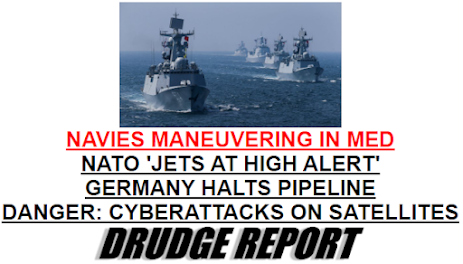 Russian Navy Cruisers Positioned to Counter U.S., French and Italian Carrier Groups in the Mediterranean
Three Russian guided-missile cruisers have been arrayed across the Black Sea and the Mediterranean Sea to counter three NATO carrier strike groups, causing concern in the Pentagon, a U.S. defense official told USNI News on Tuesday.
...As the Russians have massed naval assets in the Mediterranean and Black Sea, the U.S. has surged additional guided-missile cruiser and destroyers to U.S. 6th Fleet. As of Tuesday, the U.S. has about a dozen guided-missile warships operating in the region, USNI News understands.
...“Throughout their deployment, they will participate in a range of maritime activities in support of the U.S. 6th Fleet and our NATO allies,” the Navy told USNI News.

Israel will have war with seven western nations and Russia. The United States will abandon us, as they did Vietnam and Lebanon. The war will begin with a gas attack; every event in the Land will be tied to gas. There will be a lot of it. This is the sign.

This puts a different spin on things, doesn't it?  It sounds like it's talking about Sarin or something, God forbid!, but what if that's a misunderstanding on his part.  It certainly can't be insignificant that Israel has now become endowed with gas reserves of her own.


Israel's Natural Gas Discoveries Are Bridging Political Divides And Are Forging Economic Ties  (2019)
Even more natural gas has been found off Israel’s coastline, which may help shift the global energy paradigm. Greek oil and gas developer Energean has discovered what it says is between 28-42 billion cubic meters of natural gas, all on top of the 67 billion cubic meters that it has already located.
The discovery comes atop earlier ones a decade ago that are getting tapped and will be eventually distributed to former adversaries of Israel: Jordan and Egypt. And there are also plans to sell the natural gas to Turkey, Greece and Cyprus. Indeed, if Israel blossoms into a regional energy powerhouse, it could have profound implications for geopolitics — and possibly extend as far as East as Iraq.
Israel signs secret deal to transfer natural gas to Lebanon (2022)
In a first, Israel has signed an agreement to supply natural gas to Lebanon, Channel 12 news reports.
The network says the deal was brokered by US envoy Amos Hochstein and secretly signed this weekend. It will see Israel transfer gas from the Leviathan field to Jordan, from where it will be sent on to Lebanon by way of Syria.
The agreement was approved by the United States and was also coordinated with Russian President Vladimir Putin, according to the report.
It says the deal was partly designed to provide Lebanon an alternative to Iran as it seeks to recover from a deep economic crisis.

Israel is walking a tightrope.  And how does Iran figure into all of this, because you know it does.  We may have to wait and see.
Posted by Devorah Chayah at 12:37 PM