One day a shepherd named Moshe took his father-in-law's sheep out as he had done many times before.  As he let them roam about the mountainside cropping spring grass to their heart's content, life at home was following its normal course.  The women were going about their usual daily chores. The head of the house oversaw it all.  And down the road in Egypt, the Children of Israel groaned and cried out under the oppression of their slavery.  It was a day like every other day.  It was a day like yesterday with no sign at all that the next day would be any different - not that day nor the day after.

But then, in the blink of his eye, Moshe caught sight of a wonder never seen before and never seen thereafter - a bush on the mountainside was in flames, and he saw that despite the flickering and crackling, the bush was not burning up.  Then Moshe heard the voice of God Almighty - speaking to him. 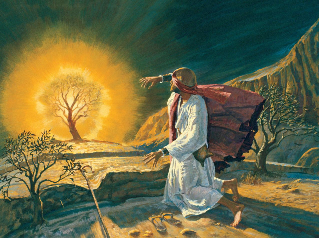 The scene at home remained as usual.  Down in Egypt, the slaves slaved on with little hope of any relief.  And yet, k'heref ayin, everything had changed and the world was never going to be the same again.  It was just that aside from Hashem and Moshe, no one else knew it yet.

Today could very well be a day like that one.  And if not today, then tomorrow. Or one day very soon.

Some are accustomed to treat the seventh of Adar, the yahrzeit of Moshe Rabbeinu, as a minor festival. Chevrot kadishot, Jewish burial societies, have their annual dinner after the seventh of Adar. Some have a custom to fast on this day. Rav Ovadia Yosef (Yechaveh Da'at 1:3) discusses this issue and rules that it should be commemorated in Adar II. The Magen Avraham (OC 380:18) and other acharonim rule that it should be observed in Adar I. (It is not clear whether the year Moshe passed away was a leap year or not.)  [Source]
Posted by Devorah Chayah at 8:14 PM