"...send and gather for me all of Israel to Mount Carmel,.... And Elijah drew near to all the people and said, "Until when are you hopping between two ideas? If the Lord is God, go after Him, and if the Baal, go after him." And the people did not answer him a word." (Melachim I 18:21) 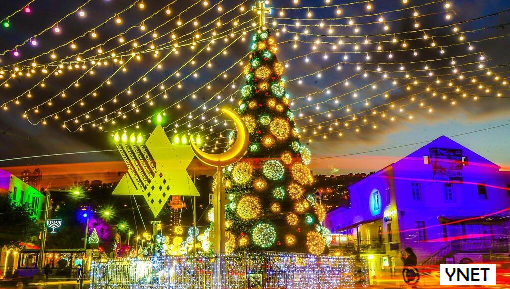 In that same place, the Children of Israel in 5782 are invited to engage with the idolaters of the 21st century...

Israelis get a whiff of European Christmas experience with special festival

The 'Holiday of Holidays' festival in the Arab Israeli neighborhood of Wadi Nisnas in Haifa offers holiday-themed food markets and gift shops, with the purpose of promoting coexistence and tolerance among all religions

In our day and age, there is a love affair going on between some Jews and some Christians.  This is spiritual adultery - a betrayal of our marriage covenant with HKB"H.

Those Jews have somehow convinced themselves that the Christians worship the same God as we do and count them as righteous gentiles, so where is the harm, they ask.  They discount the words of our holy sages and the received halachah forbidding interfaith relations and entering churches and refuse to accept any reproof.

This is written for those on the sidelines who are still deciding.  Do the Christians worship the same God that we do or not? Are they truly idolaters or are they considered as "righteous among the nations"? They claim to believe in the "God of Abraham, Isaac and Jacob," but is that true?

Listen to one of the major Evangelical leaders in America - Mike Bickle - as he answers those questions.  He claims that Christian Arabs are going to be the conduit for Jewish conversion at the End of Days, which he says is imminent.

[If you'd rather not hear it, you can read from the transcript below the video.]


These Arab and Egyptians are going to get radically committed to Jesus where there's already a bunch of radically committed ones but it's going to be millions in this great revival. And these Arab and Egyptian believers are going to be so in love with Jesus, the God of Israel and so overwhelmed by his beauty and his love for them, that they are going to stand with Jesus to reach out to the unsaved Jews in flight who don't believe in Jesus and they don't know who the God of Israel is. They think he's you know the God of Israel, the god of Moses up in heaven. They don't know it's literally Jesus and as these Jews are in flight these Arab believers are going to open up their homes to them and they're gonna be saying what what. Now, what's the deal with you? They can say no, we love you because the God of Israel, his name is Jesus, loves us. That he's revealed his love for you to us and we're with him and we love you. And I'm sure these Jews in flight, many of them are gonna go “no wait a second, this is, you’re, you know, a part of these Islamic nations. Although some of these will be former Muslims who are radically converted. And so we believe there's a great revival scheduled on God's calendar that's starting to happen right now but it's gonna really crescendo but it's gonna go beyond multitudes getting saved. These multitudes getting saved are going to understand the divine narrative that God has set this thing in order, that they could be a place of protection a place of provision refuge for these Jews in flight.

This is pure idolatry as the Rambam says:

“Can there be a greater stumbling block than Christianity? All the prophets spoke of the Messiah as the redeemer of Israel and its savior, who would gather their dispersed and strengthen their observance of the mitzvot. By contrast, Christianity caused the Jews to be slain by the sword, their remnants to be scattered and humbled, the Torah to be altered, and the majority of the world to err and serve a god other than the Lord. (Rambam, Mishneh Torah, Hilchot Avodat Kochavim…, Perek Yud Aleph)

And now fear the Lord, and serve Him in sincerity and in truth; and remove the gods which your fathers served on the other side of the river and in Egypt, and serve the Lord.

And if it displeases you to serve the Lord, choose this day whom you will serve, whether the gods which your fathers served that were on the other side of the river, or the gods of the Amorites, in whose land you dwell, but as for me and my household, we shall serve the Lord."

And the nation answered and said, "God forbid that we should forsake the Lord, to serve other gods;

For the Lord our God, it is He Who brought us and our fathers up from the land of Egypt, from the house of bondage, and Who performed these great signs in our sight, and preserved us in all the way that we went and among all the peoples through whom we passed.  (Joshua 24:14-17)

God forbid that we should forsake the Lord, to serve other gods, because you can't do both!!!  Choose this day whom you will serve!!!
Posted by Devorah Chayah at 8:01 PM