The entire month of Adar has seen the heat for war in the Middle East slowing increasing under the rising flame of Iranian aggression.  Were it not for discussion of Mask Mandates and Meghan Markle, more people would be aware of it.

Iran piles on aggression, emboldened by US-Saudi-Israel restraint
US goodwill gestures and warning signals have clearly lost their punch for Iran – even when backed by the mighty US B-52 bombers flying over their heads. After dozens of attacks on Saudi Arabia in recent weeks, Iran-backed Yemeni Houthi rebels outdid themselves on Sunday, March 8 by sending 14 armed drones and 8 ballistic missiles flying toward the Saudi petrol tank farm at Ras Tanura, one of the largest oil shipping ports in the world, and the residential area of Dharan that houses foreign oil workers, including Americans. A gag order from Riyadh concealed the scale of injuries and damage. (See attached picture.)
On the same day, two heavy nuclear-capable US B-52 Stratofortress bombers made a round trip to the Gulf and back to home base, escorted through the skies of the region by British, Israel, Saudi and Qatari warplanes. This was the heavy bomber’s seventh mission over the Gulf and the second since Joe Biden took office as president.
...Tehran has a proxy nearby, the Lebanese Hizballah, for carrying out its threat to hit Israel’s northern port of Haifa, its population and key strategic infrastructure. But to seriously damage Tel Aviv, Tehran would have to do its own work with ballistic missiles. This has not happened before, but the threat should be taken seriously, after Iran felt confident enough to destroy important Saudi oil infrastructure without fear of American reprisal.
Another significant event on Sunday was confirmation that Iran’s Revolutionary Guards are keeping up an uninterrupted campaign of terror against Israeli and Jewish targets worldwide. More than a month after a crude bomb exploded outside the Israel embassy in January, India’s counterterrorism agencies fingered the Iranian Al Qods force for the plot by means of a local Indian Shiite cell who activated it remotely.
This ties in also with the Iranian attack on the Israeli cargo ship MV Helios Ray in the Gulf of Oman on Feb. 26.
This escalating run of Iranian aggression has been ongoing for weeks without a comeback, whether from the US, Israel or Saudi Arabia. Even Israel’s systematic aerial campaign against Iran’s military presence in Syria is running out of effective steam.
The Iranians seem to feel that although their enemies loudly threaten to prevent their acquisition of a nuclear bomb, they are not about to go into action.

I've written here many times about the dream I had around 2002 of an Iranian missile attack on Israel at the full moon.  But, I don't think I have spoken before about a recurring dream that I had over the course of a couple of years which was very disturbing to me.  This is how I explained it to a friend in an email dated 16 Jan 2005.

For over a year I have been having a recurring dream.
It is always Erev Shabbat and I am always rushing too late to prepare for Shabbat. In the first dream, it is late morning and I realize I have no food to cook for Shabbat so I have to rush to get somewhere to buy food and then I am cut very, very short for time to prepare it. I barely make it. (This is not my experience in reality. I usually begin preparing two days ahead.)
In each dream, the circumstances are the same except that it gets later in the day each time. Each time, I note the time on the clock, 11 am, 1 pm, 3 pm, 5 pm. In the first few dreams, while I have to rush, at least the stores are still open and I am able to get things, but it gets harder and harder. Maybe I get home with food, but it's too late to cook. Or the store is closing as I arrive, and I can't begin to explain the feeling of desperation I experience in the dream.
The last dream I had like this happened maybe a month ago (Dec 2004). In the dream, it seemed like any day of the week, there was no indication that it was getting close to Shabbat, I was talking to someone without any care or worry and suddenly I hear this alarm (like the Shabbat warning) and I asked what it could be and the person I was talking to said, "It's Shabbat." I was in shock and devastated because I had no idea whatever that it was coming to Shabbat and I was not prepared. I had nothing ready. It shocked me that this time, I did not even realize what day of the week it was beforehand.
I have never had a dream that recurred so many times in almost exactly the same way just with differing details.

I dreamed it again. Or rather more like a nightmare. Same dream and it was like it took up where the last one left off. In the dream, my kids and I were waking up, like from a nap, and discovered that it was ten minutes after five pm on Friday (candle-lighting time) and nothing was yet prepared for Shabbat. I tried to make spaghetti in the forty minutes until sundown so we would have something, but it became a huge mess and it just couldn't be done. When the time was up, not only was there no Shabbat for us, but I felt that in trying to get ready so late, I might have actually broken Shabbat and been worse off than ever.
The dream was so distressing that I felt like I was fighting to regain consciousness just to bring it to an end and when I woke up I felt so hopeless like the message of the dream is that we're not ready and it's now too late. So if it's already too late, why have the dream, if it is supposed to be a warning or something? Then I realized that it's not Shabbat yet, we still have three days to get ready. It's not too late.
The last dream I thought was telling me that it was going to be sooner than I thought it was and don't get caught unprepared. And here it is again....

I was just re-reading the last email I sent about this recurring dream I had been having and chills literally went up my spine. I had forgotten that the time on the clock in that dream was 5:10 and now nearly a year later, a year during which I had no such dreams, I had it again last night and the time on the clock was again 5:10 with the understanding that this was candle-lighting time in Jerusalem.
I'm waking up on a Friday, thinking I have overslept late into the morning and I discover that it is already 5:10 pm with less than an hour before Shabbat. In this dream, I'm telling everyone that the recurring dream I've been having about not being ready for Shabbat has now come true. (In the dream, I don't think I'm dreaming but I remember the other dreams.)
There is no food to cook and nothing has been prepared. I'm overwrought that it is so late and nothing prepared and all the stores surely closed and no time to cook even if I could buy something...
My clear sense upon awakening from the dreams has always been that Shabbat represents the impending Geula coming closer and closer and closer. Even though I am aware of it, when it comes, it will still be totally unexpected and at this present time, I am still not ready for it.
It was just about this same time last year that the dreams stopped and now here it is again and picking up exactly where it left off ... at 5:10 pm late on "Erev Shabbat" with less than an hour to go before "Shabbat" comes in.
The clock stopped a year ago and the tragic events of last summer [the expulsion from Gush Katif] proceeded. Now, coming again into the season full of the promise of Redemption (Adar/Nissan), it has started up again and still I am not ready.... 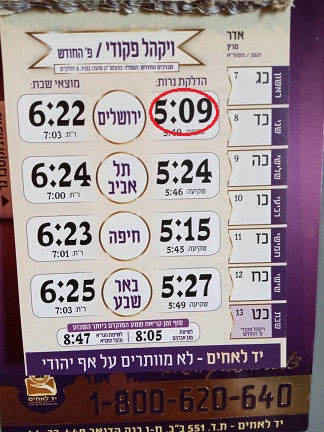 I can't say what - if anything - any of this really means, but it does seem to be significant.  Furthermore, for all of us who are STILL not ready, tomorrow is Yom Kippur Katan before Rosh Chodesh Nissan which is also a Rosh Hashanah.  There is still time to do teshuvah, but that time is growing shorter by the day.
I pray that when Mashiach does finally appear, he will find ALL of us ready and waiting!
~ ~ ~

The Connection Between Purim And Pesach
Why do we celebrate Purim in such close proximity to Pesach? Why must they always be linked in time?
The Talmud (Megillah 6b) explains, in the name of Rabban Shimon ben Gamliel, that it is “preferable to connect [one] redemption to [the other] redemption.”
In other words, the two redemptions – the Exodus of the Jewish people from Egypt and the salvation of the Jewish people from the genocidal designs of Haman in the Purim story – are naturally related and require commemoration within the same period of time.
What do hamentaschen and matzahs have in common? What connection could there be between Pharaoh and Haman, Moses and Mordecai, Miriam and Esther?
Actually, it is a pattern in the Jewish calendar that there should be a 30-day period of preparation before a major observance. The High Holidays have the month of Elul before them with preparations and soundings of the shofar. Pesach also has its preparatory season, with the Fast of Esther and Purim to set the tone for a spring of commemoration and celebration.
But there is more. The main part of the story in Esther took place on Pesach. Haman cast the infamous lot to set a date for the destruction of the Jews on the 13th of Nisan (Esther 3:7, 12). The third day, when Esther went in to see the king, would have been 15 Nisan. Thus, the Jews of Shushan fasted through Pesach in that year!
Both Pesach and Purim occurred outside the land of Israel, in Egypt and Persia. Both involved the near extermination of the people of Israel.

You can read the rest HERE.
Posted by Devorah Chayah at 11:08 AM