We are seeing censorship today on a scale more massive than anything any of us who are alive today could ever have anticipated.  We are seeing it in particular with regard to information surrounding the so-called pandemic, but really it is prevalent everywhere in what is termed "PC" language.  Only some speech is tolerated during these intolerable days and it does not include any mention of God, as the following story illustrates. 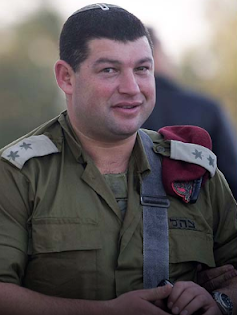 Brigadier General Ofer Winter on Sunday took up his new post as Commander of the IDF’s 98th Paratroopers Division, a.k.a. the Fire Formation and opened his acceptance notes with words of prayer and praise to God: “This is the day that God has made, let us exult and rejoice in it” (Psalms 118:24).

After the verse from the Hallel prayer, Winter added a personal prayer for his success in the new position: “God, give me humility, give me courage and give me the wisdom of the heart so that I know how to lead these people in the challenges we face.”

The IDF Spokesman’s report skipped all the clearly religious content in Winter’s remarks,....

Winter caused a stir during the 2014 Gaza War, due to the battle order he issued his soldiers upon entering the Gaza Strip. He wrote that it is a great privilege to serve in the Givati Brigade at this time, and that “history has chosen us to be at the forefront of the fight against the ‘Gazan’ terrorist, who defies and blasphemes the God of Israel.”

...In the last paragraph of his 2014 battle order, Winter added: “I lift up my eyes to the heaven and call out with you, ‘Shema Israel, HaShem Elokeinu, Hashem Echad.’ The God of Israel, please support us as we are going to fight for Your nation Israel against the enemy who despises your name. On behalf of the IDF fighters and in particular the brigade’s fighters and commanders, please apply to us the scripture that says, For it is your God who marches with you to do battle for you against your enemy, to bring you victory (Deuteronomy 20:4).”

The commander’s message was published in the general media and sparked controversy as to whether a religious commander should involve God in his leadership of his soldiers.

...Defense Minister Benny Gantz was part of the IDF brass that delayed Winter’s professional progress, pinning him for the misdeeds of a subordinate, but everybody knew they were teaching him a lesson for that Shema Israel thing.

According to a Ynet report in 2019, Gantz and his successor, Chief of Staff Gadi Eizenkot, were determined to bury Winter’s career, and it was the new IDF chief, Aviv Kochavi, who recognized his considerable skills and demanded his return to active command duty.

The reshaim may have a problem hearing it, but these Truths and those with the courage to speak it, will still be around when they are long gone and forgotten.
Posted by Devorah Chayah at 8:35 PM