...According to the weather service, the bizarre storm system was being spun into the Bay Area from Tropical Storm Fausto off Mexico’s West Coast.

Apparently running out of cataclysmic events to throw at us this year, Mother Nature decided to reach deep into her bag of tricks and pull out a Biblical classic: swirling hellfire.

The National Weather Service issued its first-ever tornado warning for a twister spawned by fire early Saturday afternoon after a wildfire in Northern California produced a towering, flaming vortex.

While not unheard of, fire tornadoes are some of the rarest weather phenomena on Earth, and meteorologists are saying this is the first time one's received an official tornado warning. 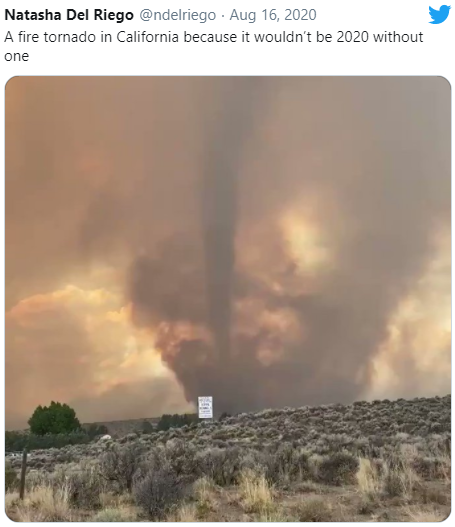 And as if that were not enough...

I actually made it to LA - for less than 24 hours, to catch my outbound aliyah flight.  Saw nothing but the airport and the motel where we spent the night close by.  I find it highly symbolic that I left LA and stopped in New York before ultimately landing in Tel Aviv. That was April 1996 and I never saw the US again.