"WE BELIEVE IN THE TORAH" 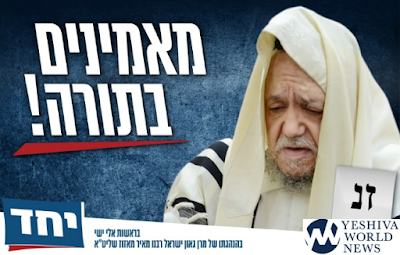 Rabbi Mazuz was unwilling to accept the Prime Minister’s words, expressing criticism against Shas leader Aryeh Deri. The conversation did not achieve its intended goal, as the rabbi refused the request, and the party is running for Knesset as planned.

...the banner of the campaign was released “we believe in the Torah” (‘מאמינים בתורה’). A number of the rabbis present addressed the audience, and then Yishai took the floor, citing how there are growing efforts to torpedo Judaism and Torah, adding, “they do not understand that if there is no Judaism, there will be no Zionism”. He explained to his audience that there is no alternative to the Torah, to which we remain committed.


Torah Code Regarding Election in Israel

It includes the words "Ben Yishai" and "Mashiach" as well as what I think are the main issues of this election: "Torah, Teshuvah, Kedushah" and "Shabbat" which occurs four times!

In a similar code, the word "Shabbat" occurs seven times!

We see from the promise and the threat from the leftists to run buses on Shabbat that this is a very big issue.

This election is part of a war against Torah, Teshuvah, Kedushah and Shabbat - a war against Judaism itself and all who cling to Torah and Mitzvot. That's why we have to support anyone who stands up for these things.

And it is no coincidence that it is scheduled to take place in the month of Nisan!
Posted by Devorah Chayah at 12:57 PM