"Given Over to Strong Delusion"

[The following is dedicated to YA and KD and their families and all the other families, you should know who you are.]

The Prophet Yeshayahu foresaw a time when...


"...the Lord shall continue to apply His hand a second time to acquire the rest of His people, that will remain from Assyria and from Egypt and from Pathros and from Cush and from Elam and from Sumeria and from Hamath and from the islands of the sea."

There is no question that this prophecy describes the return of the "Lost Tribes of Israel." No question! The Lost Tribes to be found in "Rome - the descendants of Esau" are/were Western Christians.

But, there is a catch. Not only the legitimate children heard the call* to return, but some spiritually-attuned, yet unworthy souls heard it, too. Who knows, maybe they are the Erev Rav of the Northern Kingdom. I mean there is Erev Rav among the Jews, so why not among the Lost Tribes, too? Or maybe they are really from the Lost Tribes, but they refuse to do teshuvah for the idolatry that sent them into exile in the first place. They can't let go of JC.

Whatever the case, we are in a period of spiritual birur, so Hashem has allowed the "phenomenon" of the "Ephraimite" movement to develop in order to separate the legitimate children from the illegitimate usurpers. (Search "Ephraimites" on this blog).

"...God shall send them strong delusion, that they should believe a lie...."

Certain readers will recognize the source of this quote. It describes perfectly the situation of those in the Ephraimite movement today. They are so convinced of their "identity," despite any kind of proof whatsoever, that it gives them the chutzpah to dictate the terms of their "return" and make demands upon Klal Yisrael. And still, old JC is at the heart of it!

By contrast, the legitimate children, the real returnees from the Tribes lost among Western Christianity, quietly and humbly and without any fanfare, at great personal sacrifice and sometimes with terrible difficulties, have thrown the idol away completely and have been coming, very often by entire families, to convert according to the halachah, which is really the only way the Lost Tribes can rejoin Klal Yisrael at this stage in history, as also evidenced by the conversion of the Ethiopian Jews.

The Ephraimites are insulted by the very suggestion. Good! Their arrogance already identifies them as unworthy.

This is not something new for me. I have been talking about this to people privately for twenty years.

One of the leading spokespersons for the Ephraimite movement who is very involved here in Israel is Kimberly Rogers-Brown. We've talked about her before. I bring her up now because I want to show you what happens to these unworthy souls as time goes on, despite their being in close relationship with many so-called "Orthodox" Jews.

This led to a conversation under this entry from which I excerpted the following informative quotes:


"Israel is for 12 tribes and the House of Judah is working against Him. Don't mistake my criticism of the Jews as not loving them. I see them going down a path toward destruction for disobedience. I don't want that for them any more than I want them to keep us out. ...The House of Judah had replacement theology before there ever was a Christianity. ...You are right that Christians believe Jews are the chosen people, but that is a false doctrine. ISRAEL-12tribes -are the chosen people. The Jews are only 4 tribes according to scripture. Israel is your and my inheritance, too."

In her most recent Facebook entry of August 31, 2018, Kimberly Rogers-Brown draws the dividing line between herself and her followers and those pure souls who have sincerely converted to Judaism:


"More people have converted to Judaism recently, I learned from new sources this week. The list grows longer by the week, it seems. ...we were warned about certain events that must take place before Yeshua will return. The apostasy, ‘falling away’, is such an event and it is happening now because the time is getting closer."

She is making a Christian reference to those who "fall away from the true faith" at the End of Days, precisely referencing the birur and never understanding that she is on the wrong side of it.

When a person cannot repent, they just go deeper into sin, multiplying their punishment. Here is where her error has misled her...

"The importance of knowing which line – which of David’s sons – the Messiah came through cannot be stressed enough. It is a vital piece of information that will prevent people from converting to Judaism. Why? Because one line is the righteous line, the other is evil.

Just like the Christians of old, she detests Judaism and equates it with the domain of the Satan, chas v'chalilah! And in Christianity, there is no worse epithet than "Pharisee." Again, like the antisemitic Christians of old, Kimberly Rogers-Brown equates today's rabbis with the Pharisees of the Greek Testament.


The Pharisees were trying to control Solomon’s messiah descendant then and they are still trying to do that today. This is why the Rabbis are looking for the messiah through Solomon’s line. He will seemingly do what the Pharisees then, who are the Rabbis now, want. What is it they want? They want YHVH’s Kingdom established on Solomon’s lineage.

Why do they care so much about this? It is because the House of Israel is the House of Judah’s nemesis. Judah’s Kings all came from Solomon. This is a case of the older brother trying to cut the younger brother out of the will, so to speak.

...The Pharisees would have known and understood this history during their day and they did not want a Messiah to come for the House of Israel. They wanted a messiah who would continue to uphold the hatred of the Kings toward the House of Israel from the line of Solomon.

...The return of the lost tribes was a threat to the Pharisees. ...Joseph is the rightful heir of the firstborn birthright even though the blessing of scepter temporarily went to Judah....

...The Pharisees were not going to give up that easily! They would have to kill Yeshua, .... His mission is to return Judah to his rightful place as the 4 son of Jacob and continue with His original plan of Joseph as the firstborn.

This has not happened yet, but it will happen. The Pharisees, today’s Rabbis, are fighting this by maintaining their position that the messiah of the Jews must come through Solomon.

[She talks a bit about the importance of rings in Freemasonry and continues the connection...]

... Judah had a ring, a cord and a staff. With these, he assumed power over the Israelite family even though the true symbol of the firstborn was the many-colored coat Jacob gave Joseph. Judah killed Joseph, as it were, by exiling him to gain the firstborn position. Judah, to this day is fighting to keep Joseph in exile by not allowing or even acknowledging that Christians and Hebrew Roots believers are Hebrews and Israelites, and by making it impossible to make Aliyah as House of Israel, House of Joseph, Ephraimites with our faith in Yeshua intact.

...The current political State of Israel is already a vassal kingdom of the Beast [Satan Incarnate] and the Beast’s Mystery Babylon. Now you know why the Jewish State doesn’t want those who believe Yeshua is the Messiah.

And she's off to the races. NOW, do you understand what I mean by "unworthy" souls? And how one error leads to another and another until the person has descended to the lowest level of hell? Can you imagine letting a million or more "Ephraimite"-Christians holding these attitudes and beliefs into Eretz Yisrael to settle among us? And yet there are many, many Anglo-Orthodox Jews who are working with them the bring it into reality. God forbid!

She ends with the following... 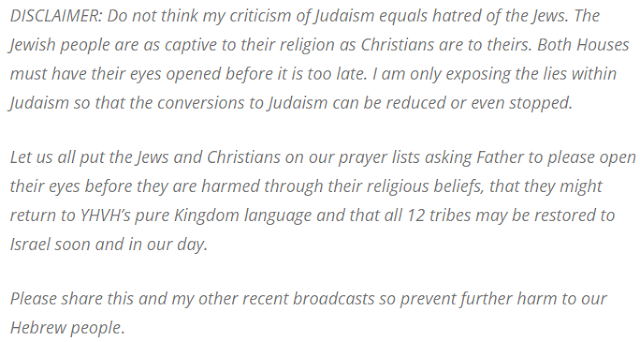 * the call to return - I believe, based on my own personal experience and on reports I have heard from others that this "call" - this final ingathering - commenced in the year 1990/5750. Forty years of ingathering brings us to 5790 (11 years from now) when Techiyat HaMeitim is foretold to begin - 210 years before the year 6000. The Redeemer must have arrived sometime within these next 11 years.
Posted by Devorah Chayah at 12:58 PM