Is It Really "Weather Modification"?

If the phenomenal flooding around the world is all due to successful weather modification techniques developed by the world's most powerful nations and now used as a weapon against their perceived enemies, why is it that their own people continue to suffer the dreadful effects of dire droughts? 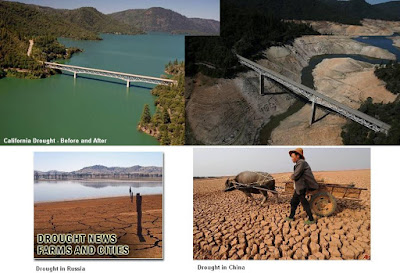 I think some people like to think so and want others to think that this is so, but I do not believe it. The Key to Rainfall is one of the keys that Hashem has reserved to Himself and has not entrusted it to any other power...

"R' Yochanan said: Three keys the Holy One blessed be He has retained in His own hands and not entrusted to the hand of any messenger, namely, the Key of Rain, the Key of Childbirth, and the Key of the Revival of the Dead" (Taanit 2a).

The three keys mentioned here by the sages are all tied to the source of existence. Through them God "touches" our world at three central stations in life - inception, being, and resurrection.

..."The Lord shall open to you his good treasure, the heaven, to give the rain to your land in its season" (Deuteronomy 28:12).  (Source)

Also, the prophet Zechariah indicates clearly the use of this power in Hashem's hands...

"And it shall be that all who are left over from all the nations who had invaded Jerusalem will come up every year to worship the King Hashem, Master of Legions, and to celebrate the festival of Sukkot. And it shall be that whichever of the families of the land does not go up to Jerusalem to bow down before the King, Hashem, Master of Legions, there will be no rain upon them." (Zechariah 14)

And that's why we pray for rain. If mankind could make their own rain at will, there'd be no need to pray for it.  Those people who can't or won't acknowledge God or His power over their lives have to find another explanation for what they see.

The United States has been hit by seven historic floods since the month of September, and the latest one is making headlines all over the planet....

And it's not just in the US either...

People urged to stay indoors as UAE is battered by rain storms
Posted by Devash at 9:09 AM

I don't know about weather modification but I do know that during my childhood I used to see skywriting; whereas these last decades, its been straight lines - supposedly chemtrails - whenever there's a clear blue sky in this densely-frum area.

Now get a load of this:
Last Shabbos, for the first time, I witnessed a deviated version of the chemtrails. I.E. running above and in-line with the road I was traversing, there were not one, but TWO chemtrails in the shape of tzelems (crosses). Of all times, they picked Shabbos to execute their gross masterpieces!
M.M.

Sandy, I'm not going to publish your links. As I tried to communicate in this blog post, some groups have an agenda behind wanting people to believe that a powerful evil cabal can control even the weather when our sources indicate this is simply not true. It ramps up the fear and feelings of helplessness and even rage when people think evil controls the world instead of G-d. HKB"H has always used nature as a veil behind which to interact with man without being seen so to speak. To then go and say this is no longer the case, that it is evil men who have taken it over, is both untrue and unwise.

They control the economy and the war machine and manipulate public opinion through their control of the media, yes. But "Nature" is 100% Hashem. That's also why despite all their best efforts to launch a plague they have been unsuccessful.

And here's a Carlebach composition sung by Rav Dov Kook of Tverya.

right. the narcissistic psychopaths and self-proclaimed masters of the universe, the thieves, liars, murderers and rapists who have a way of rising to "power" in so many nations, don't like to be reminded that there is a Creator, and that, in His eyes, they are so little bugs, bacteria and Coprolites (a fancy term for fossilized animal dung). we live in an Era where the illusion of human "power" will be shown just for what it is, an illusion. we are VERY NEAR the time when the current Age of the Nimrods is coming to an END.

And here are examples of narcissistic thieves:

oi68.tinypic.com/5np4z7.jpg
oi67.tinypic.com/2vbn21s.jpg
The latter are my own. Amateurly rendered, since I'm sensitive (irradiated by) EMFs. Masochistic of me? For sure!
M.M.