Too easily we forget! 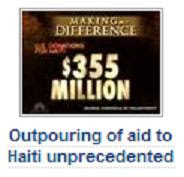 
From the Pessach Hagada based on the above verse:

"And I will pass through the land of Egypt" - I and not a ministering angel;

"and I will smite the first-born in the land of Egypt" - I and not a fiery angel;

"and against all the gods of Egypt I will execute judgment" - I and not a messenger;


The humanitarian crisis caused by the earthquake in Haiti has moved the hearts of good people the world over.

And the question is repeated again and again, "Why did HaShem do this to the poorest, most backward country in the world?"

But, as always, the answer comes down to the hopeless dead-end statement that the word "why" has no place in the same sentence with the word "HaShem," because mortal man can never ascend to the heights of HaShem’s logic.

But, although we cannot know why this decrepit, bedraggled and crippled nation was chosen by HaShem to suffer this staggering, chaotic situation, we can deduce certain conclusions from the larger picture.

Almost immediately after the disaster struck, help was offered by the United States, the UN, and many other countries, including our own State of Israel. Huge tonnage of food and medical supplies are reaching Haiti, including thousands of soldiers to provide security for the many relief agencies operating there. The sums of money are staggering, and no one is counting when human lives are at jeopardy. The United States, as well as other countries, have offered to accept a large number of orphans.

These actions are the height of altruism and deserve our highest respect. In view of the fact that the people of Haiti will never be able to repay the many nations, these life saving efforts are really le’shaime shamayim (for their own sake; not for profit).

The following is a partial list of the aid being extended to Haiti:

Great Britain - $10 million, plus a four-person government assessment team and 71 rescue specialists along with search dogs and heavy equipment.

France - a 400 staff from the public security authority, as well as a ship with two surgical operating units, 50 beds for injured and earth-moving equipment.

Iceland and Portugal are each sending more than 30 rescue workers.

Taiwan - 23 rescue workers and two tons of aid and equipment.

As expected, no muslim countries are represented on this list.

Very, very impressive! But it is like a rose bush with a very prickly, poisonous thorn. For herein lies the wretched, pathetic moral of this episode, so far as we Jews are concerned, that turns the entire episode into an undeniable, damning accusation of the world before the Holy Throne of HaShem.

The civilized peoples of the world are capable of cooperating in assisting the destitute and hopeless. We have seen it before in earthquake situations in Turkey, at times of flooding in Asia and droughts in Africa, and in military intervention to safeguard the lives of innocent people threatened by evil men with evil intent, as in Korea, Iraq, Afghanistan and others.

But every dollar or band-aid is a damnation of the nations, because

THERE HAS NEVER BEEN INTERNATIONAL COOPERATION TO ASSIST THE JEWISH PEOPLE. BUT THEY ARE QUICK AND UNITED TO CONDEMN US.

In the 1930s, when Hitler called for the Jews to leave Europe, no country (except Uruguay) opened their doors to the potential victims of the German Amalekites. We should not forget the statement issued by Prime Minister Mackenzie King of Canada that "Even one Jew is too many."
During the Second World War, neither the United States nor the British ever bombed any concentration camp to stop the killing of Jews. The United States never once bombed the rail tracks to the camps. Had they done so, ten thousand Jews would have been saved every day in Auschwitz alone.

The unforgettable and unforgivable story of the S.S. Saint Louis must be retold over and over. The ship sailed from Hamburg, Germany, at the beginning of the war and reached the United States with hundreds of Jews aboard. The United States refused entrance to these Jewish refugees, and when the ship made its way to Havana, Cuba, the United States warned the Cubans to send the ship away. The captain of the Saint Louis saw no choice but to return to Hamburg, from where the Jews were taken off and sent to their death.

After the war, there were six hundred thousand Jewish survivors in the camps of Europe, with no country willing to take them in. Where was the great outpouring of international Christian charity then?

In 1947, when the UN voted for the establishment of a Jewish State it was moved by sinister motives. Firstly, the countries of Europe and the United States did not want to accept these Jewish refugees, so the best option was to "toss them to the dogs" in the Middle East, where the Arab hordes would finish the job.

With the establishment of a Jewish State, there was to be a parallel Arab State which would guarantee a very short life expectancy for the Jews. The British, whose mandate over the Holy Land was terminated on May 14, 1948, the day the Jewish State came into existence, removed their troops from the country, but they did not return home. They waited in international waters for the remnant of the Jewish yishuv (settlement) to beg them to return in the face of the Arab onslaught.

Russia voted for the establishment of the State, with the intention that Israel would serve as a center for the Soviet Union in the Middle East.

Let’s not forget, that when the armies of seven Arab countries attacked us on the 15th of May, 1948, the United States announced and enforced an arms embargo on the fledgling Jewish State. Not one bullet was allowed to be sent here.

At that time, my family was involved in the obtaining of arms for the State. I recall the day when I came home and saw my parents in tears and screaming, because it was learned that the FBI had confiscated an arms cache ready to be sent to Eretz Yisrael.

But with the help of HaShem, we defeated all these Arab armies without the "help" of the world and to their absolute chagrin.

In the three weeks leading up to the Six Day War, no country volunteered their help. It was the "hand of HaShem" which led our pilots on the morning of June 5, 1967 when our air force destroyed all the Arab air forces in the Middle East, and gave us all Yerushalayim, the Shomron, Yehuda [Jerusalem, Samaria, Judea] and the Golan to this day.

In the Yom Kippur War we were dire straits, but the United States withheld desperately needed military aid. President Nixon intervened and ordered the immediate shipment of weapons to Israel, and for this he will have a lonely place in Gan Eden [Paradise] without any other American politicians to talk to.

The real reason, however, is that Israel made a "line in the sands of Sinai" which, if crossed by the Egyptian army, would necessitate our use of unconventional weapons.

This President Nixon did not want.

We won the Yom Kippur War. At its end our troops were 101 kilometers from Cairo, and 35 kilometers from Damascus. We did it alone, and we did it "our way," of course with a little help from the God of our fathers Avraham, Yitzchak and Ya’akov [Abraham, Isaac and Jacob].

The concept that the good that people do will come up at a later time to point an accusing finger at them is deeply intrenched in the conduct of the Catholic Church.

There is much good in the Church. Many of their priests and nuns are dedicated to the betterment of humanity. We can find them in the most treacherous parts of the world bringing literacy, medical help and monotheism. The heads of the Catholic Church were not like the nation of Amalek which was "born of bad seed." Each Pope strove to further the convictions of the faith, which is admirable.

But here is the "thorn."

Since the Church was capable of doing humanitarian acts, the conclusion is that their sadistic, barbaric, cruel, heartless, inhumane treatment of the Jewish people over two thousand years of our European experience was the result of a calculated and reasoned strategy to destroy us.

The reality is that Israel and the Jewish people have no real friends among the world’s nations, but we have among them real enemies.

If I were to compose a list of cultures that contributed to the advancement of humanity, I would not be off the mark if I place the Jewish nation first and the Haitians very close to last.

And, although I wish the poor people of Haiti that they succeed in rebuilding their country, an objective observer can discern an inverted equation with regard to the world’s reactions to current events, with the most sacred people, in the best case, neglected, while an impoverished culture receives great attention.

The Gemara (Avoda Zara 2b) describes what will occur in the future, when HaShem will invite every nation to detail the highlights of their culture. The first to enter will be Roma (European countries including the USA), followed by Paras (Iran and their Moslem friends) who will describe the roads they paved, the bridges they built and the great actions of their societies, and they will say to HaShem that all that they had done was to further the ability of the Jews to abide by the Torah.

HaShem will then show each nation the real motives behind their actions, when nothing they ever did was for the benefit of the Jewish people.

But the real conclusion from this story is that we do not need help of the nations, because we have HaShem’s promise that He will forever watch over us.

The precedent was set in Egypt where HaShem alone brought out His chosen nation from bondage, as stated above:

"And I will pass through the land of Egypt" - I and not a ministering angel;

"and I will smite the first-born in the land of Egypt" - I and not a fiery angel;

"and against all the gods of Egypt I will execute judgment" - I and not a messenger;

Indeed, it is not we who need the help of the nations but it is they who so vitally need the Jewish people. But, unfortunately, this they will find out only when it will be too late.