Old sunspot 1039 is crackling with solar flares. Over the past 48 hours, it has produced five M-class eruptions. Click on the image to play a movie of the latest, an M2-blast recorded by STEREO-B at 1756 GMT on Jan. 20th: 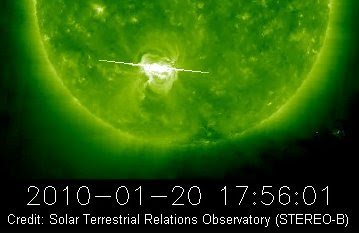 The ongoing sequence of flares signals a sharp upturn in solar activity. Before this week, the last time the sun produced even a single M-class solar flare was in March 2008--almost two years ago. M-class solar flares have a moderate effect on Earth. Mainly, they boost the usual ionization of Earth's upper atmosphere, causing short-lived radio blackouts at some frequencies and radio enhancements at others.
Posted by Devorah Chayah at 10:45 PM