Good without God is just "o" 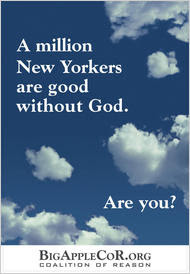 Which is probably all that these egotistical people are going to be able to say when Hashem reveals Himself to the world.

Starting next Monday, a coalition of local groups will run a monthlong advertising campaign in a dozen Manhattan subway stations with the slogan “A Million New Yorkers Are Good Without God. Are You?” The posters also advertise the Web site BigAppleCoR.org, which provides a listing of local groups affiliated with the Coalition of Reason, the umbrella organization that coordinated the campaign.

The campaign — which is being paid for by $25,000 from an anonymous donor — follows a similar but unrelated monthlong campaign on buses by New York City Atheists in July. Jane Everhart, a spokeswoman for the New York City Atheists, said that campaign was highly successful and brought in many new members. “We are trying to raise money to do it again,” she said.

PS: I would not want to be anywhere near NYC after this comes out!
Posted by Devorah Chayah at 10:22 PM

PS: I would not want to be anywhere near NYC after this comes out!

Because the boogyman will attack?

Seriously, you're superstitious enough to think gods will throw lightning bolts or something?

how outrageous that is. people have nothing to do but advertise the fact that they are cynical,souless and proud?

If there is a god and he decides to reveal himself to the world, I reckon I'll say something more along the lines of "Well if you wanted me to believe in you before now, all you had to do was, well, reveal yourself before now!" ;-)

Though if this being would do something so vengeful as to make you want to stay away from the city, in retaliation for people merely expressing their doubt as to of a being existence which has, as you yourself admit, NOT revealed himself in an unambiguous way... And being an omnipotent being, he would KNOW that that's all it would take for anyone to believe... Well, then such a being would be childish and petty. If such a being DOES exist, I seriously doubt that he is as juvenile as so many believers seem to think he!

I suggest you read this week's parsha...Parshat Noach.

'minds me of the graffiti someone scribbled on the wall at the university:

...which someone else crossed out, and wrote above it: