Moving the US Embassy to Israel has been promoted by Jews as a great "kindness" that President Trump performed "for Israel."  And so it was presented by those who initiated it and who were part of it.  In reality it was a hostile act of conquest. 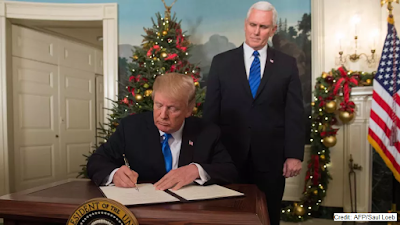 Glittering Christmas decorations festooned across the White House hallway enveloped Trump, with Vice President Mike Pence deliberately – if a bit awkwardly – placed directly behind the president’s shoulder, ensuring that no camera angle could leave him out of the picture.

It all felt carefully staged to send a strong message to Christian evangelical voters and their leaders that this is their victory and Trump is their man.

...The announcement also took place just before Pence is set to visit Israel for three days, from December 17-19. This guarantees enhanced media coverage for the Pence trip, where he will certainly be greeted as a conquering hero – pleasing evangelicals even more.

...Trump is showing love to Israel because evangelical voters form the crucial linchpin in his relatively small but solid support base. Evangelical voters threw their support behind Trump in 2016 at a higher rate than any previous presidential candidate – giving him 81 percent of their vote, even more than they gave to fellow evangelical George W. Bush.

It was these Christian evangelicals – and Pence, an evangelical himself and a prominent touchstone of their influence in the Trump administration – that were clearly the driving force behind the Jerusalem declaration.

...In order to truly understand the centrality of this “theological dog-whistle” to Trump’s evangelical base, you must take their religious beliefs seriously, argued progressive Christian commentator and pundit Diana Butler Bass, in a widely circulated thread on Twitter. Bass said the Jerusalem issue was so important to evangelicals because it is necessary to regain Judeo-Christian control of the Temple Mount.  (Source)

In other words, he didn't do it for the Jews.  And the time will come when we will rue the day.  In point of fact, the US embassy was not "moved" as the one in Tel Aviv is still in operation, and a new facility was not built to house one in Jerusalem.  This was a largely symbolic event.  A plaque was placed and a ceremony was held at a building which already existed and is conveniently located on "the seam line" between "East" and "West" Jerusalem - the better to serve both Israel and "Palestine."  If you listened closely to what was actually said at the time, only "West" Jerusalem was actually recognized as Israel's capital!


...Jerusalem was key in [Trump's] attempt to win over the coveted evangelical vote — already a growing part of his political base thanks to his enlistment of Mike Pence, the devout, born-again Christian, as his vice president.

The evangelical spirit behind the embassy relocation was present during the inauguration ceremony that took place that May day in the Arnona neighborhood of Jerusalem: The small and exclusive group present included a few dozen evangelicals who had come as part of a special delegation from the United States, headed by Pastor John Hagee and Robert Jeffress. After his speech, Hagee asked his audience for a “Hallelujah.”

Other speakers — Jewish and Christian alike — peppered their speeches with biblical quotes relating to God and Jerusalem. Even Netanyahu quoted scripture: “Thus saith the Lord of hosts: I am jealous for Zion with great jealousy, and I am jealous for her with great fury” (Zechariah 8:2). Some evangelicals take that line to be a reference to J****’ return to Jerusalem. (Source)

A few months earlier, Mike Pence had made a rousing speech in the Knesset, establishing that the United States would stand with Israel so long as it shared American values and would only go so far in recognizing Jerusalem, leaving discussions about the city's ultimate borders until final status negotiations.  Furthermore, he made abundantly clear that the US priority in the Middle East is to strengthen the Christian presence there and even went so far as to suggest that Israel assist it in doing so!

"It is deeply humbling for me to stand before this vibrant democracy.  ...We stand with Israel because your cause is our cause, your values are our values, and your fight is our fight."

And the day that ceases to be, which is not so far off, that will be the end of this "friendship."

US President Donald J. Trump doesn't do anything out of the "goodness of his heart," and he doesn't do "favors" unless he is expecting something in return.  To Trump this is just "doing business" or "making a deal."  It's very much better to owe nothing to Mr. Donald J. Trump.  Just ask anyone who ever fell foul of him.  He comes to despise anyone he considers "disloyal", i.e. anyone who crosses him or does not show the proper appreciation for his "kindness."  Ultimately, he acts only for his own aggrandizement.

Trump's Jerusalem Syndrome: Whose End of Days Messiah Does He Think He Is?

...There are large numbers of believers, in fact, who see Trump's announcement - and, in fact, Trump himself - as hastening the long-awaited coming of the Messiah.

But just whose Messiah is Trump hastening? Is it the fundamentalist Israeli vision of a return to a Jewish kingdom and priesthood reminiscent of the Old Testament? Or is it the Evangelical belief in the return of J**** C***** and the conversion of all the Jews to born-again Christian doctrine and faith?

And, considering the unfathomable idiosyncrasies of the president's personality, isn't there every chance that we are now watching the evolution of a particularly Trumpian version of Jerusalem Syndrome - that disorder in which a recent visitor to the Holy City begins to take on the personality of a biblical figure?

The Messiah, for example. 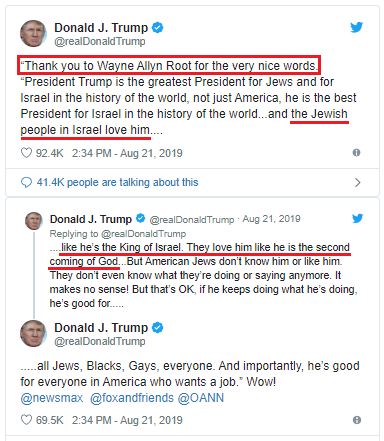 ..."When Trump promised Evangelicals that he would move the embassy to Jerusalem, it was a Christian move to stand with Israel,” Indiana Evangelical Pastor Paul Begley said earlier this year.

"He knows that it is his Christian responsibility to do that. When this happens, it will make it easier for Israel to build the Third Temple, fulfilling Bible prophecy for the End of Times.”

But what would happen then? As Israelis awaited Trump's statement Wednesday evening, Israel's Channel 10 broadcast a clip entitled "Welcome to the Coming Apocalypse," in which Pastor Begley, an American flag flying behind him, spoke with such rapturous excitement that nearly kept his words from leaving his lips:

"And they will embrace him."

Israel Channel 10 anchor Nadav Eyal asked for a response from Likud lawmaker Yehuda Glick, an Orthodox Jew and a prominent leader of the Temple Mount movement, which seeks the rebuilding of the Third Temple.

It's fair to assume that the last thing Glick would want to see is for Jews to convert en masse to Christianity. And yet, he clearly sees Begley - and, in particular, Donald Trump, whose inauguration Glick enthusiastically attended - as allies in bringing the Jewish Messiah Glick so fervently hopes one day to welcome.

"Paul Begley is a dear friend of mine," Glick said. "We have an excellent relationship, certainly.

...as the White House decorations suggested, this week he gave Jerusalem to the Evangelicals for Christmas, as a capital of their very own. 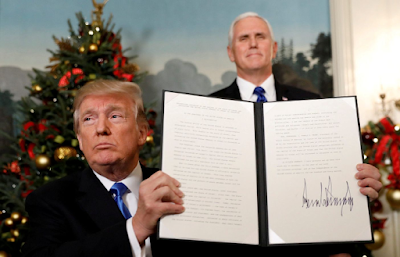 Precisely.  This was no "kindness" meted out to the Jews as so many erroneously believe.  This was a statement of possession. 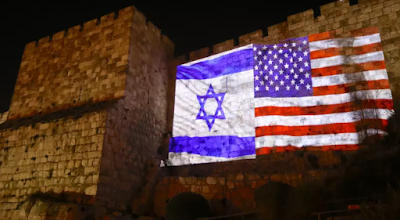 All over the Land of Israel, these Christian Evangelicals are laying claim to our inheritance in the name of their false god.

The Awake Jerusalem Facebook page made this announcement back in April 2018:


Calling all worshippers:  Let's go home to Jerusalem!  A strategic movement is forming to rebuild the Tabernacle of David.  We are gathering at Zedekiah's cave (where scholars believe that Solomon may have mined stones for the building of the Temple) in Jerusalem. We will pray and worship at strategic sites like the Temple Mount, Garden Tomb, and Yad Vashem.

Their "About" section says the following:


Awake Jerusalem was birthed in 2018, when nations from all around the globe came together to worship in God’s Holy Land, Jerusalem. We are a global house of prayer movement that assembles together in prophetic gatherings of non-stop worship and prayer. Join us and be a part of these historic days!


From the nations of the earth, a tribe is arising…

Join us as God is assembling the nations to come and ascend into His Holy Land!

Experience a multinational and multicultural gathering, meet and journey through Israel with hundreds of other believers from around the world, and let your voice be heard in this historic and prophetic worship declaration!

Make this October YOUR journey to God’s chosen land... #ItsTimeForJerusalem

So there you have it, folks.  The Jews can stop bowing and scraping and acting like shnorrers now.  We owe Trump nothing.  As he himself said, he was only recognizing the "reality."  And that reality is, we have Jerusalem because HKB"H gave it to us, not Donald Trump!

Our boys - Jewish, Israeli boys - died to win back Har Habayit for us, not Christian American soldiers.  And we don't recognize the term Haram al Sharif, Mr. Mike Pence!!!

One day, very soon, the entire Jewish public is going to understand. Our Father Ya'aqov knew better than to accept any sort of "kindness" from our Uncle Eisav. (Uncle S"M).

If you want to see what HASHEM is forced to look upon because of our inaction and shirking of our responsibility to protect the kedushah of this precious gift of Holy Jerusalem, just witness the following video of the avodah zarah which is coming in two weeks time thanks to this Awake Jerusalem crowd (and they are just one of many!).

THIS is what Mike Pence wants from Israel, when he talks about ensuring "freedom of worship for all" in this land.  THIS is the price of their "friendship" and their "kindness."  We can't afford to keep paying it!!!