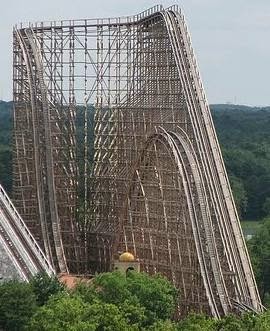 [Excerpt: Regarding the petirah of Rav Wozner,ztz"l]

...This is the sign that we are at the beginning of the greatest decline before the geulah shleimah. And it will go fast, it will go really fast. The descent - sharp, and in every sharp descent there is great speed. Therefore, I warn everyone, warn everyone, to take a deep breath, and make a very strong connection to HKB"H, because if not - this fall will frighten you and drive you crazy, and you won't even be able to breathe, or even to think how to save yourselves. Whoever prepares now - won't be afraid, they will know that they are, so to speak, in the hands of HKB"H and they won't be afraid of this sharp descent.

You have, of course, been through, here and there, a sharp physical descent. I'm not speaking about an emotional aspect, I'm talking about like a roller-coaster. It' s the feeling of going up high and when you're going down - your stomach goes up in your throat... and it's a terrible fear, even when you know it's only 'like' [falling]. But, now, it's not 'like', now it's for real. When we begin to descend below, then it will really be scary if you're not ready.

The whole time that we are holding onto this rope - it's impossible to go down and with this rope Hashem will pull us up, up and we won't go down. We will hold on to the rope, everyone will go down - and we will go up. Just hold on to the rope. But, it's not so simple to hold on to this rope, we need to believe, we need to want to be with HKB"H, not just to save ourselves, but first and foremost to be with HKB"H more than anything in the world, more than any connection in this world, only this we want, and He will pull us up with this rope.

...HaRav Shmuel, HaTzadik HaGadol, ztz"l, he was really a Jew 'above and beyond', he didn't get into any arguments, he ruled on what he was sure was true and didn't get into a dispute with anyone. He remained within his dalet amot of the Torah and didn't go out and didn't get mixed up with the politics between the hareidim. He didn't take one side against another. He simply gave his ruling. He ruled - and that's it. He ruled without the influence of askanim. He ruled the truth that he believed in, based on his closeness to HKB"H and his tremendous knowledge of the Torah and his love for Am Yisrael. The moment that he ruled, that finished the business.
But, he remained at the end. He remained the last of this generation and passed away from the world. He remained the last who was actually loved by everyone, the Litvak-Ashkenazim as well as the Hasidim, as well as the Sefaradim. And even the seculars gave him honor, why? Because he did not go down to their level, he didn't occupy himself with their politics. He closed himself within the dalet amot of the Torah and didn't take himself out at all into the dirty street. And therefore, he was the last that Hashem is taking back before the enormous troubles that are waiting for this world, the tremendous destruction and death that is about to be for us in the near future. He's the last. He can no longer cover us or keep the accusations in Shamayim from speaking against us. He's there with all the tzadikim....