Why isn't every Jew an anti-missionary?

I continue to be upset and frustrated at the lack of interest shown by those whom I have tried to inform of the missionary infiltration into the yishuvim, particularly in the Shomron.

Tommy Waller and his family of thirteen, who are self-avowed Xian missionaries, have made their home in Ariel twice a year, every year for the last six, using it as a base for launching their missionary endeavors.

In the fall of 2009, they brought 100 like-minded missionaries with them to Itamar and Har Bracha to provide free labor to religious Jews. 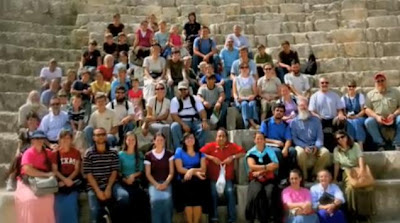 Why do they do it? They are "building relationships," i.e. sucking in the Jews until they are ripe for receiving their "gospel."

Tommy Waller: "For us, sharing the gospel is not only verbal, it has an action to it. It's based on relationships. As we're working with these people, we'll be able to share with them this Jesus that we know."

They seem so nice! This is the danger of allowing relationships like this to form between non-Jews and Jews, how much more so those who worship Yeshu as the Creator, G-d forbid! and call him "HaShem" and refer to him as "YKVK," G-d forbid!!

They have been welcomed into Jewish homes and Jewish life. How long before there are shidduchim between their children and ours, G-d forbid!!!

Brayden Waller: "Our family has begun a ministry called HaYovel. The vision of HaYovel is to develop a network of individuals, families and congregations [churches and messianic 'synagogues'] ready to labor side by side with the people of Israel, to bless them, to stand with them, to share with them a passion for the soon coming of the Jubilee in Yeshua, the messiah."


One Israeli beneficiary commented: "They don't ask anything. They only want to give." Are we really so naive that we are ready to believe that the goyim will give so much to us with no strings attached?

The Wallers and their followers think they are building their Olam Haba with the mitzva their "Master" gave them---to "go and make disciples"---to convince others by whatever means possible to become believers and participants in their idolatry.

It seems some or many Israeli Jews are buying their story and becoming convinced, G-d forbid!

(Full video here.)
David Rubin, former Mayor of Shiloh: Quotes from the Prophet Yirmiyahu and tells the Waller Group that the "notsrim" translated "watchmen" is actually referring to "Xians."
IF ANYONE HAS ANY INFLUENCE WITH THE RABBIS IN THE SHOMRON, PLEASE MAKE THEM AWARE OF THIS VITAL ISSUE!!
NOTE: (If this is not yet proof enough, a perusal of their website will provide you with the following evidence of their true motivation.)

“Yom Kippur (Day of Atonement, Lev 23:27) starts tonight. We will be fasting, praying for and thanking YHWH for His forgiveness as well as asking Him to reveal the areas in our lives that we need to repent for and make right. This is a very solemn time for all Israel. Even a lot of secular Jews fast on Yom Kippur. May Yeshua reveal His grace and forgiveness to them.”
***

“The Mount of Temptation is the alleged 'high mountain' where Yeshua was tempted by satan in Matt 4:8. We had an awesome time of worship as we looked out towards Jericho and proclaimed Yeshua’s Name over the city.”
***

Brayden, Dad and I are on our way to go be with them [the Ortiz family] – so pray that God will use us to comfort them and that Yeshua’s name will be lifted high in that Israeli hospital!

Since they started their work in Israel the family helped build a winery, harvested tons of grapes and olives, trimmed acres of vines and olive trees, moved rocks and boulders for roads and most importantly, built relationships with both Israelis and Palestinians.

This fall the Waller family was joined by several other families who wanted to help bring down the wall of division. “For us it’s a spiritual deal – a faith deal,” said Sherri Waller. “The battle is over the land because God gave it to the descendents of Abraham – that includes us.”
Posted by Devorah Chayah at 5:42 PM