NOT "Just Another Synagogue" 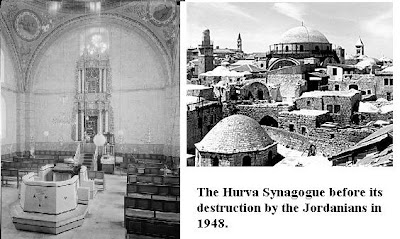 Haaretz features an article on the imminent completion of the rebuilding of the "Hurva" Synagogue with the following caption:

If the Vilna Gaon was right, the 3rd Temple is on its wayJerusalemites worried restored house of prayer, Hurva, will be just another synagogue.

The way the author of the piece portrays it, the "Zionist Orthodox" and the secular public prefer the site remain more of a museum for tourists to visit than a house of prayer and study for Jews. Anyone who spends much time in the Old City can testify to the fact that already our holiest places of prayer are so overrun with "tourists" that it's hard for a Jew to squeeze in; whether it's Har Habayit, the Western Wall or the tunnels opposite the Kedosh Hakedoshim.

Imagine if the Holy Temple would be rebuilt in today's "PC" climate. These people would want to turn it into a life-sized model for tourists to tramp through rather than the House of G-d.

Have you noticed lately how the lines are really be drawn in big, bold and black strokes as Israeli society divides itself basically into two camps---the Hellenists vs Torah-True Jews? How appropriate for this time of year!
Posted by Devorah Chayah at 11:51 AM