(IsraelNN.com) The International Christian Embassy in Jerusalem, which frequently has been accused of conducting illegal missionary activities, has urged to police to arrest people who are violent against missionaries. It is illegal to conduct messianic activities for Jews to convert, but the law often is not strictly enforced.

The groups made its appeal following last month's attack on the teenage child of a Christian missionary in Ariel. His father is a prominent messianic pastor.
In case, you didn't already know, the missionaries OWN Ariel. The mayor is bought and paid for. Ten years ago, they were sending the children of Ariel out of Israel to attend a church service in Texas. Today, there is a building dedicated to John Hagee... 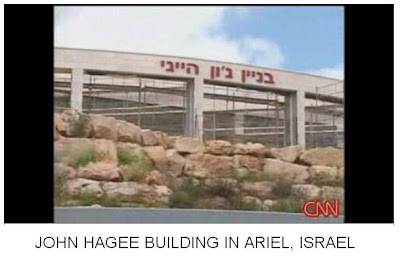 It's very worthwhile to read Penina Taylor's article on the Ariel attack---Harassment and Freedom. She is the new director of Jews for Judaism in Jerusalem.

If you think this incident might have turned the tide between Jews and "xian-zionists," just wait and see what happens when Mashiach comes to power and kicks them all of the country and the xians begin to believe he is their anti-christ!

Be sure you make some time while you're doing the last of your Pesach cleaning to listen to Mina Fenton on the issue of accepting bribes, uh, um, I mean donations from xians. Listen to "Is Judaism Under Attack by Christianity?"