When Will We Stop Burying Our Children?!! 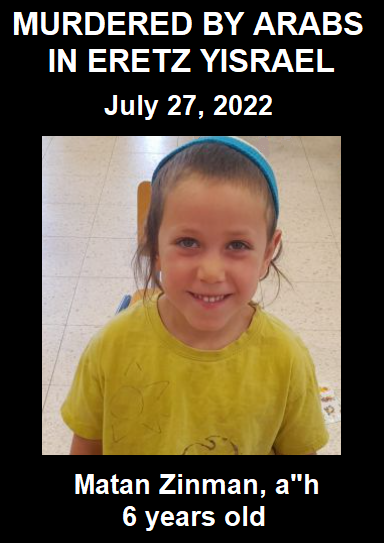 6-year-old Israeli boy killed, 6 injured in West Bank car crash
Burying our children is 1000 times worse than a "thorn in the side," how can we continue to bear this?!!! 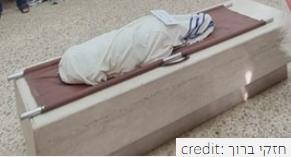 "Thorns In Our Sides" - Rabbi Meir Kahane
"But if you do not drive out the inhabitants of the Land before you, those of them whom you leave shall be barbs in your eyes and thorns in your sides, and they will harass you upon the Land in which you dwell. And it shall be that what I had meant to do to them, I shall do to you." (Num. 33:55-56)
Regarding Eretz Yisrael [...], non-Jews are divided up into only two groups. The first is non-Jewish nations who were in the Land when Israel arrived there to conquer and occupy it. The second is all the rest of the non-Jewish nations, including idolaters, descendants of Noah, and foreigners and alien residents. The Torah saw a twofold danger in the nations who dwelt in the Land before Israel arrived to conquer it, namely the seven Canaanite nations. On the one hand, like all the nations, the Canaanites constituted a spiritual danger to Israel, who had been commanded to establish a Divine, Torah-oriented state in Eretz Yisrael, isolated and set apart from the abominations of alien cultures. Moreover, the Canaanites posed a unique danger in that they viewed Israel as conquerors who had taken their land. They would hate Israel forever and would forever dream of revenge and seek opportunities for reconquest.
Following is the great commentator Abarbanel (on Ex. 34:11-12): Verses 11-12 inform us that since G-d is driving out the Amorites and the other nations, it is improper for Israel to forge a covenant with them. If a nobleman helps someone by fighting his battles and banishing his enemies, it is morally inappropriate for that person to make peace with them without that nobleman's permission. So, too, with G-d driving out Israel's enemies, it is inappropriate for Israel to forge a covenant with them, for that would profane G-d's glory. This is especially so considering that this friendship and this covenant will not succeed. With Israel having taken their land, there is no doubt that they will constantly seek Israel's downfall. This is why it is said, “[the land] where you are coming.” Since Israel came to the land and took it from its inhabitants, and they feel that is has been stolen from them, how will they make a covenant of friendship with you? Rather the opposite will occur. “They will be a fatal trap for you.” When war strikes you, they will join your enemies and fight you. How exalted and true are Abarbanel's words! This is the real reason for the approach taken by Halachah to the seven nations. G-d understood the mentality of these nations. He knew that they would view Israel as conquerors and thieves and would forever relate to them with resentment and hatred. The Torah explicitly commanded, at least regarding driving out the Land's inhabitants, because if they remain via a peace treaty, they will become “barbs in your eyes... causing you troubles in the Land.” (Num. 33:55). Not in vain are the words “yerushah” - inheritance, and “horashah”- driving out, so similar in Hebrew. G-d knew that without driving out the nations of the Land, the Land would not be an inheritance for them. Rashi explained the same way: (on Num, 33:52-53): “Vehorashtem”: Drive them out. “Vehorashtem et ha'aretz”: If you first “clear out the Land of its inhabitants”, then - “viyeshavtem bah” - you will be able to survive in it. Otherwise, you will be unable to survive in it.
And Or HaChaim writes (Ibid., v. 55): “They shall cause you troubles in the land” (Num. 33:55): Not only will they hold on to the part of the land that you have not taken, but the part which you have taken and settled as well. “They shall cause you trouble” regarding the part that you live in, saying, “Get up and leave it.” It follows that those same laws that applied to the seven nations apply to all the nations that live in Eretz Yisrael in every age. This includes those of our day, who view Eretz Yisrael as their own land and soil, and who view the Jewish People as a nation of conquerors, robbers and thieves. That same danger looms over the Jewish People and its control over Eretz Yisrael in our time as then. After all, what difference is there as far as G-d's warning that “those who remain shall be barbs in your eyes and thorns in your sides, causing you troubles in the Land” (Num. 33:55), between the seven nations and between any nation that dwells in the Land, views it as its own, and then Israel come and conquer it from them? Surely, it will feel that same hatred and that same fierce will for revenge as did the seven nations, as explained by Abarbanel (quoted above).
What does that mean for us and for today's situation in Israel?

As Rav Binyamin Ze'ev Kahane points out in his commentary on the Parashah: While it is true that the national religious movement in Israel has put forth great efforts in the fulfilling of the mitzvah «Yishuv Ha'Aretz» (the settling of the Land), it is important to point out that they are familiar with only half of the mitzvah. For the mitzvah of «Yishuv Ha'Aretz» has two sides to it. Well known to us all is the first side — the establishing of settlements. That's the «nice» part of the mitzvah. But it is the other side that has been totally ignored by those who proudly wave the banner of «Yishuv Ha'Aretz». [...]Settling the Land and expelling the gentiles in it are not only two sides of the same mitzvah, but each side is actually dependent on the other. The Torah constantly warns us about the impossibility of fulfilling just half of the mitzvah: «If you do not drive out the inhabitants of the Land from before you, those who remain shall be barbs in your eyes and thorns in your sides, causing you troubles in the Land you settle» (Num. 33:55) Another settlement is not the answer to the Arab terror, but rather the Arab terror is the result of our being content with making settlements and not completing the entire mitzvah.

Praying for the entire Zinman Family refuah shleimah and may the Holy One, blessed be He, grant them peace and comfort and speedily restore their child to them in techiyat hameitim with the coming of our righteous Mashiach to finally drive out the wild animals who slaughter at will on the highways and roads of our Holy Land.

Wishing all the readers Shabbat Shalom and Chodesh Tov - may all our fast days be turned to days of joy and celebration.

Posted by Devorah Chayah at 8:54 PM